Bayer and Alnylam drugs among highlights at ESC

New drug candidates in heart failure and cholesterol control, plus insights into healthy lifestyle habits, are among the highlights from the London conference, writes Kevin Grogan.

The almost 33,000 delegates who descended on the European Society of Cardiology (ESC) meeting in London were buzzing with the recent approvals of potential cholesterol blockbusters from Amgen and Sanofi/Regeneron but it was an early-stage competitor from Alnylam and partner The Medicines Company (TMC) that stole the headlines. 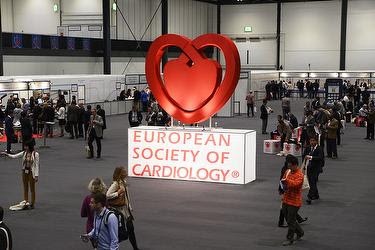 Amgen's Repatha (evolocumab) and Sanofi/Regeneron's Praluent (alirocumab), both PCSK9 inhibitors which are injected every two or four weeks, have recently got green lights on both sides of the Atlantic for treatment of patients who are statin-intolerant. However phase I data on Alnylam/TMC's ALN-PCSsc, demonstrated that the treatment reduced low-density lipoprotein-cholesterol (LDL-c), the bad kind, by 64-83 per cent, comparable to the newly-approved drugs, but, strikingly, that effect was achieved for more than 140 days after just a single dose.

While Repatha and Praluent inhibit PCSK9, ALN-PCSsc uses RNA interference (RNAi) that stops PCSK9 being produced in the first place. The treatment, which was generally well tolerated, could be administered two-four times a year, thus tackling the perennial problem of compliance.

It is very early days, but John Kastelein of the University of Amsterdam said that if the safety of ALN-PCSsc is confirmed in larger studies (phase II trials will begin at the end of the year), "it may offer an important treatment option for patients, physicians, and payers."

The recent approvals of Repatha and Praluent, and Novartis' heart failure treatment Entresto (valsartan/sacubitril), meant that there was little to excite ESC delegates in terms of late-stage compounds close to regulatory submissions. One treatment that is going into phase III, however, is Bayer's finerenone for chronic heart failure and diabetic kidney disease.

Phase II data presented at ESC showed that finerenone, a third-generation mineralocorticoid receptor antagonists (MRA) demonstrated meaningful reductions in all-cause death and cardiovascular hospitalisation versus the older MRA eplerenone. Presenting at a hot-line session at the congress, Gerasimos Filippatos from Athens University said the researchers were particularly surprised by the striking reduction in cardiovascular events observed in the finerenone 10/20 mg dose group.

He added that finerenone could prove to be safer and more effective than eplerenone and another MRA, spironolactone. Bayer seems to think so and plans to enrol almost 15,000 patients into phase III trials, looking at chronic heart failure and diabetic kidney disease, "two important indications of high unmet medical need," according to Joerg Moeller, head of global development at Bayer HealthCare.

Don't be a couch potato, have a siesta

Away from the therapy side of things, a host of lifestyle studies were presented at the ESC with sitting down too long in front of the television and naps taking centre-stage.

Toru Shirakawa at Osaka University presented data from an 18-year study in more than 86,000 people, which found that watching an average of five or more hours of television per day was associated with twice the risk of fatal pulmonary embolism as watching less than two-and-a-half hours daily. He advised the same preventative behaviour used against 'economy class syndrome' on planes, namely taking a break, standing up, walking around and drinking water.

Another study confirmed the benefits of taking a siesta, with research from the Asklepieion Voula General Hospital in Athens showing that a nap in the afternoon is linked to lower blood pressure and reduces the need for high-blood-pressure drugs. Presenting the data, lead author Manolis Kallistratos took inspiration from two ex-prime ministers: "Winston Churchill said that we must sleep sometime between lunch and dinner, while Margaret Thatcher didn't want to be disturbed at around 3pm. According to our study, they were right."