Analysing the impact on social networks: Twitter as a catalyst of #ASCO14

Analysing Twitter use around the recent ASCO conference yields insights into how it was used - and by whom - to spread the word on advances in cancer treatment.

Many years ago someone decided to use a white bird to explore the world after heavy rains. The white bird – a pigeon to be precise – came back with something in its beak that was interpreted as a very good sign: an olive branch. Noah immediately gained a new insight: that somewhere was land where the olive tree grew.

Nowadays you may find some romantics using courier pigeons to send messages, but most people use the 2.0 version of a bird, Twitter. Because we wanted to know what was going on around the 2014 American Society of Clinical Oncology (ASCO) annual congress and the impact of the clinical studies that were discussed there, we analysed the insights brought back from this new pigeon.

The plenary session of the ASCO meeting, which attracts thousands of oncologists from around the world to discuss the latest developments in the treatment of cancer, took place in Chicago from 30 May to 3 June. ASCO, which was also celebrating its 50th anniversary, is one of the largest (if not the largest) meetings of oncologists in the world.

For the purposes of this analysis of the impact of the data presented at ASCO, the only source of information was Twitter. Data collection started on 19 May and ran until 5 June. In addition to the hashtag #ASCO14, the data were collected according to different terms related to oncology to get a global understanding of the impact of this event. A total of 18,344 tweets were collected and used for the analysis (predefined set of categories).

Twitter activity during (and some days before) ASCO's annual meeting was exponentially higher in 2014 compared with 2013. According to ASCO sources, 3,094 participants used #ASCO13 last year compared with 7,376 using #ASCO14 this year, and the number of tweets per hour grew from an average of 76 in 2013 to almost 200 in 2014.

As Figure 1 shows, tweets that included "cancer" had an exponential increase starting two days before ASCO, with the highest percentage happening on the central days of the meeting in Chicago. 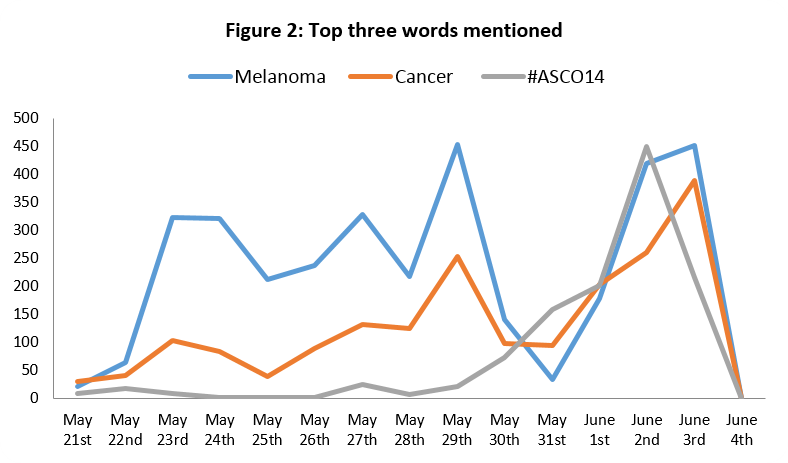 The numbers suggest that melanoma was a trending topic even before ASCO, with a significant increase at the end of the congress. Excitement was building before the meeting due to highly anticipated data on several melanoma drugs in development. Along with advances in the immunological approach, a significant number of tweets focused on advanced melanomas, which had attractive preliminary and pivotal results. Study results presented at ASCO showed the PD-1 targeting antibody MK-3475 has high and long-lasting activity against metastatic melanoma, which is expected to support accelerated regulatory approval in the US. This study led to melanoma being the cancer type mentioned the most on Twitter during the meeting, with more than 4,000 tweets. 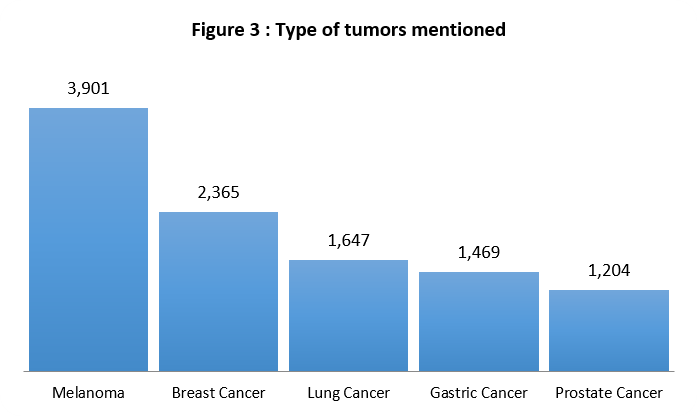 Items linked to breast cancer remain a key area. Analysing the conversations on Twitter before and during ASCO, we found that one of the most anticipated news stories was related to the ALTTO study among patients with HER2+ breast cancer.

ALTTO monitors the effect of adding lapatinib (Tykerb, GlaxoSmithKline) to Herceptin (trastuzumab, Genentech/Roche), the drug that is routinely used to treat patients with HER2+ breast cancer. Contrary to what the researchers expected, the study presented at ASCO 2014 showed lapatinib did not improve the results of Herceptin, the gold-standard treatment. For both reasons and for the high level of awareness that breast cancer raises, it has been a reference in our data analysis.

Perhaps the most relevant therapeutic advance presented at ASCO is immune pathways in the treatment of cancer, suggesting a new inflection point. Most of the tweets analysed include a reference to "immunotherapy," and many others mentioned how lymphocytes act against cancer and what can empower them.

Beyond providing instant accessibility for those unable to attend ASCO 2014, tweeting improved the meeting experience for those attending the conferences by playing the role of "last-minute" journalist.

Although it is not easy to measure the tangible impact of Twitter discussions on clinical oncology practices, physicians used Twitter to report news from scientific sessions, share information they thought was relevant to their peers about different treatments, and for personal promotion.

It is not strange that oncologists tweeted more about ASCO than any other speciality did, but the volume of tweets from other specialists is a clear reminder of how deep the roots of cancer go. Dermatologists dealing with melanoma drove a high number of tweets. Gastroenterologists and paediatricians were identified in dozens of tweets.

"Twitter and ASCO have enabled internal and external dialogue, a very close dialogue with cancer communities and a better understanding of patients' unmet needs."

It is clear that the role of those tweeting from the ASCO meeting rooms is very relevant if we take into account the number of retweets. But what we found is much more than that: Twitter and ASCO have enabled an internal and external dialogue, a very close dialogue with cancer communities and a better understanding of patients' unmet needs. According to a doctor who is an expert in breast cancer and was very active on Twitter with #ASCO14 and #bcsm (breast cancer social media), Twitter has been a good opportunity to provide education and support to a large number of women in her daily practice. Besides #bcsm, #hcldr (healthcare leaders tweet chat) and #treatdiaries (treatment diaries) created many conversations during ASCO with people inside and outside the oncology professionals group. This exchange of information, experiences and feelings shared on Twitter around the world – as a courier pigeon – during ASCO represent a challenge and an incredible opportunity to understand patients' unmet needs.

Who is talking, how and from where? Searching for Janey

More than 8,000 tweets came from iPhones (see Figure 5), double of those coming from Android devices, while about 4,200 tweets sent or re-sent from the web.

It's no surprise that most tweets came from the United States since the conference was held in Chicago and we focused our analysis on tweets written in English, but whenever possible we also identified the origin/country of authors. Besides the US, tweeters from the UK, Australia, France and India participated in the discussions (Figure 4).

Base: N=364 Tweets with country of origin of the user identified.

The diagram below identifies the "authors" of tweets. The top five tweeters were an organisation/institution related to melanoma, a research master (UC Berkeley-UCSF Master of Translational Medicine Program), ASCO itself and a pharmaceutical company.

When focusing on top five hashtags, the first thing we noticed was that there were two names, but who were those people?

At the beginning something did not match: Janey Busby is a director of catering and convention services in a hotel in Austin, Texas. But she is also one of the most active members of "4NATHALIE."

Nathalie Traller is a 15-year-old girl from Oregon who was diagnosed with alveolar soft part sarcoma (ASPS), which accounts for only 0.5%-1% of sarcomas. Nathalie, fighting a rare cancer, is backed by a passionate community. This community is aware of the new immunotherapy drugs presented at ASCO14 and is conscious of the power of Twitter to get to where would be almost impossible using other means.

Twitter is clearly becoming an important way to keep up with the latest developments at ASCO's annual meetings, both for attendees and for those unable to attend. In fact, in the largest session halls at the meeting, the organisers displayed select tweets on the screen prior to the start of each session. The 2014 meeting also was the second year that ASCO provided for questions from the audience to be submitted via Twitter. As social media, especially Twitter, becomes more ubiquitous at ASCO, attendees and non-attendees alike will be able to communicate and share the information most important to them.

Rafael García Pedrosa is the Managing Director of Kantar Health Spain, and is a member of the Executive Committee. He joined Kantar Health (Legacy TNS Healthcare ) 22 years ago from IMS where he was a Technical Director. Rafael was responsible for driving the business, managing and coordinating the healthcare teams in Portugal, Greece and Latin America and now he continues leading the Spanish business due to his initiatives and innovation capabilities.

Rubén Arribas is responsible for the Digital department of Kantar Health Spain, where is in charge of Digital technologies and Data Visualization. He is also responsible of keeping Kantar Health's Spain Social Media Listening platforms working and running as well as Kantar Health's SML public portal (Social Pharma). He has developed a Key Opinion Leaders' platform adapting it to different geographic areas (APMEA and EMEA) too.

Have your say: Is Twitter helping to break down barriers in cancer care?