Researchers are set to reveal the latest good news in cancer research – but questions about price and value won’t be far away, reports Andrew McConaghie. 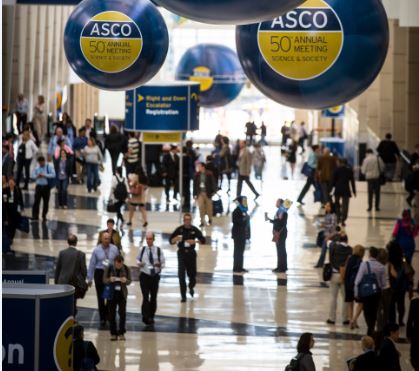 The importance of ASCO, and the excitement around new cancer data has grown hugely in recent years, and this is set to continue in 2015 (Image: ASCO)

The countdown has begun to the annual American Society of Clinical Oncology (ASCO) congress to be held in Chicago later this month – now the undisputed number one showcase for exciting new advances in cancer treatment.

The field of oncology is enjoying a remarkable period of progress, with exciting news drugs emerging from pharma and biotech pipelines every year, promising advances in common and rare tumour types.

But these advances come at considerable cost, and healthcare systems around the world are concerned about the ever-increasing cost of treating the disease. Along with news of exciting ‘late breaking’ data, questions about long-term funding and value for money will undoubtedly be a major issue at the ASCO congress, which takes place between 29 May and 2 June.

This year is being billed as one of the most exciting in cancer, with several new classes of drugs showing great promise.

Oncology analysts at Kantar Health have picked out their 10 data abstracts to watch out for at the conference: 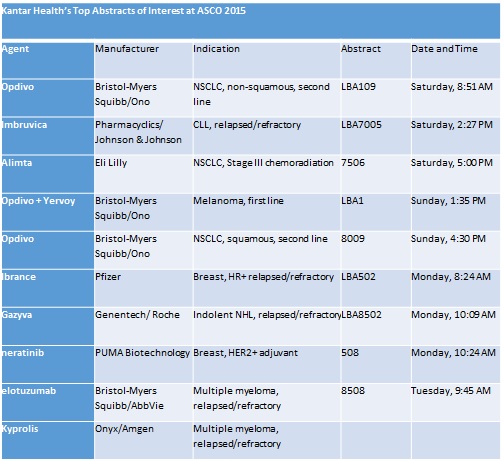 Keytruda and Opdivo battle for dominance in immuno-oncology

The most talked-about drugs at last year’s ASCO were undoubtedly the checkpoint inhibitor drugs, led by Merck’s Keytruda (pembrolizumab) and Bristol-Myers Squibb’s (BMS) Opdivo (nivolumab), and will be again this year.

Both drugs have since gained their first approval in advanced melanoma, and are now extending their reach into other cancer types, most notably non-small cell lung cancer (NSCLC).

BMS has taken the lead in lung cancer, having recently gained US FDA approval for Opdivo for patients with metastatic squamous NSCLC (via its CheckMate -017 trial). Patients with a squamous tumour represent only 25 per cent of patients, so data on non-squamous patients (the remaining 75 per cent) represent a bigger prize, and Opdivo is expected show outstanding results in its CheckMate -057 trial (abstract LBA109 at ASCO).

Kantar Health organised a panel of experts providing an overview of ASCO highlights on a webinar earlier this week.

Patrick Cobb, a practising oncologist at St Vincent Frontier Cancer Center in Montana and past president of the Community Oncology Alliance (COA) commented on the significance of the study.

“The results of this study will be critical to expanding Opdivo’s label beyond the 26 per cent of the NSCLC that is squamous histology, into the broader all-comers patient population.”

Crucially, Opdivo has shown to be superior to docetaxel in overall response rate, progression free survival (PFS) but also in overall survival (OS) in squamous patients – extending OS by more than three months to 9.2 months.

He says this is encouraging data, and that similar benefits are expected in squamous patients – confirmation coming on Saturday 30 May when the data is presented in Chicago.

One of the most important unanswered questions about the checkpoint inhibitors is the role of the PD-L1 biomarker: does it affect how well patients respond to the drugs or not?

The rivals in this space are coming up with different answers to this question. BMS’s analysis of Opdivo in CheckMate -017 suggest the biomarker does not predict a patient’s overall survival benefit from its drug.

However its rivals are all betting on levels of PD-L1 expression being a key biomarker – the higher the levels, the better the likely response to treatment.

Studies of Merck’s Keytruda and Roche’s late-stage MPDL3280A both suggest a direct link, with Roche set to unveil strong data from its POPLAR study in NSCLC.

Another factor muddying the waters is that each of the companies uses a different assay to test for the PD-L1 biomarker, making it more difficult to predict which way the science will lead.

AstraZeneca is another player active in the field with its MEDI4736. The company is pursuing a number of combinations with other new agents, such as tremelimumab and is building up a broad oncology portfolio.

Michael King, managing director of JMP Securities and senior biotechnology analyst commented on BMS’s new study of Opdivo combined with Yervoy in first-line melanoma treatment. He expects BMS’s Checkpoint -067 study (LBA1 at ASCO) to be a positive trial, with Opdivo + Yervoy showing improvement in overall survival compared to either of the drugs alone.

However King suggested that the cost to health systems of the two drugs combined would be a major issue, and that the survival benefit would have to be significant to justify the extra cost.

Yervoy currently costs $110, 220 for a year’s treatment, while Opdivo is $100,720. He expected the combination, once approved, to be priced at around $187,000, but also anticipated the firm would have to offer significant discounts, and referenced Gilead’s approach when it introduced its high cost hepatitis C combination Harvoni.

King also highlighted one company which had already suffered from disappointing data, even before ASCO gets underway. He said Puma Biotechnology had ‘got the short end of the stick’ after its abstract for breast cancer drug neratinib was published and disappointed investors. The abstract showed the drug managed only a small advantage over placebo, and produced severe diarrhoea in around 40 per of patients. These poor results saw its stocks fall 20 per cent overnight.

Kyprolis is already approved for relapsed/refractory myeloma patients who have received prior therapy with an immunomodulatory agent and proteasome inhibitor.

The drug has been a commercial success as a third-line agent, and earned $306 million in US sales in 2014, its first full year on the market. The new study to be presented at ASCO is the phase III ENDEAVOR trial, a head-to-head of Kyprolis/dexamethasone versus Velcade/dexamethasone in relapsed/refractory myeloma. Kyprolis is a second generation proteasome inhibitor to Janssen’s first generation proteasome inhibitor Velcade, and Amgen needs the trial to show the new drug’s superiority.

Stephanie Hawthorne: “If there was any suggestion lingering that this [Kyprolis] was just a ‘me too’ drug, this lays that to rest.”

There are a number of questions remaining about where the drug might fit into myeloma treatment, however. Data on overall survival may be presented at ASCO, which will begin to clarify its value. The drug’s safety has also been a talking point, as increased incidence of cardiac and renal toxicity was also seen in the trial, and these concerns could limit its use.

Hawthorne also looked at BMS/AbbVie’s elotuzumab, a new monoclonal antibody treatment for myeloma, which has been given Breakthrough Status by the FDA.

Hawthorne says the abstract data from ELOQUENT-2 looks promising, and suggests the drug could have a superior profile to its rivals Kyprolis and Novartis’ Farydak (panobinostat), particularly in terms of side effects, but a clearer picture would emerge once the rival companies had presented full data.

These studies are just the tip of the iceberg of the data being presented at the conference – ASCO has released 5,000 abstracts ahead of the event.

It is worth noting that the ASCO committee’s four highlighted abstracts were not all new, cutting-edge treatments – three of them were based on new techniques of targeting or combining existing chemotherapy and other treatments. This illustrates that frontline physicians have their own innovative ideas about how to optimise existing, usually low-cost treatments – a thrifty approach appreciated by payers around the world.

Read Stephanie Hawthorne’s preview of the pivotal abstracts from ASCO