Santhera is putting the needs of rare disease patients at the heart of its rare disease speciality business. Chief Executive Officer Thomas Meier, PhD, talks about the company’s mission – and how rationalising Europe’s drug review systems could help patients.

Set up in 2004 through the merger of two start-up biotech companies, Swiss-based Santhera is now emerging as one of the fastest-growing rare disease pharma companies in Europe.

Santhera received its first European marketing authorisation in September 2015 with the approval of Raxone in the treatment of patients with the rare eye condition Leber’s hereditary optic neuropathy (LHON). Raxone is the first and only medicine to be approved for this condition, and the first to be approved for any mitochondrial disorder: a major milestone in the rare disease field.

The next frontier for the company is Duchenne muscular dystrophy (DMD), where it is pursuing a licence for Raxone to help maintain respiratory function in patients.

The company’s CEO Thomas Meier says all 120 employees at the company are dedicated to finding new treatments for these overlooked, life-altering diseases. 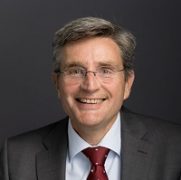 Most particularly, Santhera also have two experienced experts who are solely focused on patient advocacy work, which includes regular interactions with patient organisations, as well as individual patients and their families. Occasionally, they even help introduce patients to an appropriate patient organisation.

This work is led by Vanessa dos Reis Ferreira, PhD, MBA in Europe, and by Jodi Wolff, PhD, in the US.

Thomas Meier says that central to Vanessa’s and Jodi’s interactions with patients and their families is that they are listening and willing to understanding what is most important in their lives.

“We listen very closely to what patients and patient organisations have to say. For example, we recently had a workshop with a DMD patient advocacy group to learn about access to support for pulmonary function, which we are especially interested in.”

He says it is also important to understand the variation in access to services and care across European countries.

Santhera is now raising awareness around the importance of maintaining pulmonary function in DMD, and Thomas says patients are very grateful for this initiative. That’s because until now there were hardly any tools to educate doctors and patients in their respective countries about loss of respiratory function in DMD, which ultimately is a life-threatening complication.

“We have our ears on the ground and talk regularly with these patient groups – we get their feedback and have an open conversation with them.”

Thomas stresses that Vanessa and Jodi have no commercial targets to drive up sales of Santhera’s product; instead they engage, listen and help build awareness in the medical and wider social community.

Through this personal contact and open dialogue, Vanessa and Jodi have established Santhera as a trusted partner and honest advocate for the patient community.

Thomas adds that the needs of patients with LHON are very different to those affected by DMD – while DMD patient associations are established and well organised, many LHON patients are still isolated and without peer networks or links.

Santhera has looked to remedy this by connecting patients with LHON and families who are interested in taking a leadership role in their country with other successful advocates in the field – all organised as grass-roots initiatives by dedicated patients and families, and sometimes their treating physicians. To further help raise awareness of this exceptionally rare disease, Santhera named Fabrizio Sottile as its European LHON disease ambassador. Sottile is a decorated Paralympic swimmer and is actively engaged in raising awareness for LHON.

The company also aims to raise awareness among European healthcare systems about best practice in these disease areas. In LHON, for example, this means avoiding a lengthy diagnostic process that can last years. A simple genetic test can quickly verify the diagnosis and individuals affected with LHON can start treatment and lifestyle changes essential to preserving their vision.

“In LHON we are helping, supporting and encouraging organisations in several countries to organise themselves and reach out to representatives in other countries. That way a European network is being created with the goal of supporting patients.”

Thomas Meier says there is one very clear way European regulators can build on this engagement with patients: by harmonising market access systems across Europe, including pricing and reimbursement.

He says the European Medicines Agency’s (EMA) centralised approval procedure for medications to treat rare diseases results in a single marketing authorisation for all European Union countries, Norway, Iceland and Liechtenstein – and this is a great advantage. However, this unified approach is undermined by each country applying its own health technology assessment (HTA) policies and pricing and reimbursement procedures.

“The way pricing and reimbursement is settled in each individual country currently limits and slows down access to rare disease medicines, most of which are urgently needed by patients.”

He says these differences create ‘huge inequality within Europe’.

“In some countries you can launch immediately within a few weeks of a positive decision. But in other countries, pricing and reimbursement can last for many months or even several years until a patient gets access to the same treatment.”

He says it would be ‘hugely advantageous’ if there were a harmonised pricing and reimbursement system in Europe – although he understands that this is unlikely to materialise because of different sized economies and different political priorities.

His comments come at a time when the European Commission is pushing ahead with plans to harmonise health technology assessment across the EU – although quite how far this harmonisation will go is yet to be seen.

Thomas Meier welcomes the plans but, like many in the pharma industry, he hopes that the process will result in the slowest decision makers speeding up their processes – rather than the current fastest ones slowing down to meet a common European standard.

“Europe-wide HTA procedures are one approach – but I wouldn’t want to see everybody moving towards the ‘lowest common denominator’. That can happen if a larger European group gets involved, so we need to be vigilant about that.”

He adds: “European regulators are, of course, focused on ensuring the safety and efficacy of new products, but I think we are also seeing moves towards cutting back unnecessary barriers to access.”

He says all stakeholders need to keep in mind the needs of patients. For patients with rare diseases, speed of access to new treatments can have a huge bearing on their long-term health and quality of life and can even be a matter of life or death, going blind or regaining/maintaining their current vision, as is the case with LHON.

“These patients can’t afford to have unnecessary delays to accessing new medicines. That’s why pharma companies and regulators need to listen and integrate their viewpoint into actual decision making. If we can do that we will make a big difference to all patients with rare diseases in Europe, and to their families.”

Thomas Meier was appointed Chief Executive Officer (CEO) of Santhera in October 2011, having served for seven years as its Chief Scientific Officer (CSO). Thomas was the founder and CEO of MyoContract, a Basel-based research company focused on orphan neuromuscular diseases, which he merged with Graffinity Pharmaceuticals of Heidelberg, Germany, in 2004, to form today’s Santhera.

In 1999, Thomas became an independent research group leader and lecturer in the Department of Pharmacology and Neurobiology at the University of Basel, Switzerland, where he established MyoContract – the first start-up company originating from the Biozentrum research facility.

He received his PhD in biology from the University of Basel in 1992 and subsequently joined the University of Colorado Health Sciences Center, Denver, CO, USA. He has a distinguished scientific track record in the field of neuromuscular research. Before joining the industry, Thomas was awarded the International Research Fellowship Award from the US National Institutes of Health (NIH) and a long-term fellowship from the Human Frontier Science Programme. In 2007, he received the BioValley Basel Award for outstanding contributions to the life sciences.

At Santhera, Thomas Meier also serves as Delegate of the Board and Chief Executive Officer.

Read another thought leader article in this series: