The internet and social media are often heralded as a panacea for rare disease patients and their carers as they seek information, but for some parents it’s face-to-face collaborations and meetings that really make the difference.

pharmaphorum spoke to three leading campaigners for Duchenne muscular dystrophy (DMD) to find out how they took matters into their own hands and why they are optimistic about the future.

There are many roads to becoming a patient advocate, and for Ricky Andreis it’s a journey that began when his son Martin was diagnosed with DMD ten years ago and he found himself scanning the internet for information on the genetic muscle disorder.

Finding out about the Action Duchenne conference in London, he travelled from his home in Sweden to attend, but not before making contact with the Swedish Muscular Dystrophy Research Foundation. Penning a few lines about the conference for them on his return, he was invited to attend their meetings and from that starting point soon joined the organisation’s board.

“Martin was diagnosed in 2008 and, of course, my wife and I were completely down and devastated. When I found out about the conference in London I said to my wife, ‘I’m going there, because I need to find out what the hell is going on’, and I met a lot of fantastic people – scientists, researchers and patients – who are working all over the world.”

Inspired by that event, the Swedish Muscular Dystrophy Research Foundation now holds its own conference every other year. “It’s almost as big as the one in London and researchers come from all over the place to attend, including a lot of Swedish researchers and families,” Ricky explains.

This kind of hands-on approach is common among DMD campaigners, and is echoed by the experiences of Klair Bayley, who’s from Australia and works for the Sydney-based charity Save Our Sons Duchenne Foundation. Her son Logan was diagnosed with DMD some ten years ago and the lack of information that was available then, drove her to want to make a difference. “It wasn’t very clear back then, even on the internet. I’m not a scientist, so I didn’t really know what to do about curing DMD, but I felt I would know what to do with the information that was given out.”

That prompted Klair and Save Our Sons to put together resources for families and “try to make some noise around government issues and getting Australia’s ‘foot on the ladder’ of the Duchenne world”.

“We’ve had a lot of success now with clinical trial readiness in Australia and we’ve got a nurses’ programme in place, with five nurses across the country to look after those with Duchenne and to help facilitate clinical trials.”

A trailblazer among DMD campaigners 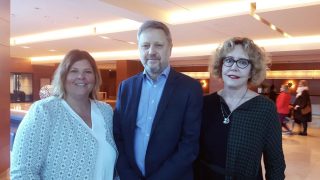 In addition to speaking with Ricky Andreis and Klair Bayley, pharmaphorum was also fortunate enough to interview DMD campaigner Pat Furlong, whose two sons were diagnosed with the condition in 1984. Even today, for all the help they can provide, the internet and social media are not always the answer to finding out about rare diseases. But living in a small US town years before the internet became available, Pat had to go to extraordinary lengths to learn more about the condition affecting her sons.

Realising the medical community at the time wasn’t interested in “what they considered a crazy mom”, she first borrowed $100,000 – forging her physician husband’s signature on the joint loan agreement. That money funded a quest that began by ordering a stack of publications from the nearest medical library, which she used to identify the key physicians working in the area. She then approached them under the guise of being a young post-grad or MD student looking for a job. Having worked in medicine for most of her life, she had a head start with some of the terminology and no problems bluffing her way through conversations.

“I would go and ask them: how well is this disease characterised, what do we know, who’s involved? I learned that there was no standard of care and worldwide investment in Duchenne research was less than $5 million.”

During all of this she was also caring for her sons, who were unable to walk from aged nine and unable to move their arms by the time they were 12 or 13. Tragically, the boys died when they were 15 and 17, but Pat’s determination to make a difference pushed her to keep learning about their condition.

Ultimately her cover was blown by the prominent American scientist Lee Sweeny who, though he ‘ratted her out’, wanted to work with her to raise funds for research. It was a major step on the path that would see her gather leading researchers together, work with other DMD parents to build centres of excellence for the condition and then, around the turn of the millennium, take her quest to Capitol Hill.

“We wrote a piece of legislation called The MD Care Act, the Muscular Dystrophy Care and Research Act, and it was introduced into the House and Senate in 2001 on Valentine’s Day. At the same time, we held a congressional hearing on DMD, so that was a historic meeting in that all of the muscular dystrophies were represented there, and it spurred the legislation through,” Pat says.

Since being signed into law by George W Bush in December 2001, The MD Care Act has generated $800 million of research into muscular dystrophies, with nearly half of that going to DMD. Bringing the story up to date, the patient group Pat founded, Parent Project Muscular Dystrophy, has just part-funded the largest non-pharma company gene therapy clinical trial that saw the first patient with DMD dosed in January.

“That’s it. That’s all I do,” says Pat, with a spectacular sense of understatement.

Speaking to Pat, Ricky and Klair, a number of common themes emerge, despite their specific, local experience in the US, Sweden and Australia.

Issues of access are one, and these can be particularly stark in the US, Pat says. “Our healthcare system is a disaster. People may be covered for a drug and then their employer changes insurance companies and following that they will be denied access. We really need to do something to improve access and reimbursement. I think that we are moving in the right direction – we have 20 Certified Duchenne Care Centres (CDCCs) across the United States and continue to grow this network.”

“We are planning to begin a certification programme for adult care so that we understand what the mechanics or what the pieces and components of adult care should include.  To begin the process, we intend to gather experts and patients to discuss what models exist and what may be needed, to ensure components of optimal care are available across the lifespan of DMD.”

In Ricky’s home country, boys in Sweden who are unable to walk are often taken off treatment. “It’s really very upsetting to say the least, because the treatment can help all the muscles in the body, including boys’ upper limbs and also their lungs.”

In addition to issues of access, medical opinion used to engender feelings of ‘therapeutic nihilism’ among patients – telling them that nothing could be done for boys with DMD. The sense that medicine can’t do anything to help has been slowly lifting, though there’s clearly a long way to go. One of the things helping this is the way the traditional medical model is changing “to put the patient at the centre of the care and [have] everyone to work as a team”, Klair explains.

Despite the continuing difficulties faced by those caring for someone with DMD, these three DMD campaigners are optimistic about the future, even if it sometimes feel like they take two steps forward, only to move one step back.

Sarepta Therapeutics has followed through on its promise to file for accelerated approval  of its gene therapy SRP-9001 for Duchenne muscular dystrophy (DMD), as it aims for a launch in the

Ben Hargreaves examines why a research project in the UK could provide key insights to develop treatments against many of the most prominent diseases impacting society.