VPAS: Achievements so far on affordability

In the second part of this series taking stock of the 2019 Voluntary Scheme for Branded Medicines Pricing and Access objectives, Leela Barham looks at the second VPAS objective that relates to affordability (spoiler alert: government gets millions in payments).

The affordability objective is broken down further to:

The mainstay of the VPAS when it comes to affordability is the affordability mechanism, set out Chapter 4. With a target for an allowed growth rate in total NHS branded medicines spend agreed, anything above 2% results in payments from members to the Department for Health and Social Care (DHSC). These are calculated as percentage of sales for each year and payments made quarterly.

Predictability for government is aided by the scope of the calculation which includes statutory scheme sales as well as parallel imports. The statutory scheme covers branded medicines sales to the NHS for companies who choose not to become members of the VPAS, with some exemptions relating to low unit costs or low revenues. There is also a smoothing mechanism in VPAS to help if there has been under or over payments in any given year to be built into future payment percentages.

For the DHSC to be able to run the scheme requires a lot of information from companies. They must provide quarterly sales reports as well audited sales reports for each year.

Progress on VPAS is easy to measure when it comes to payments from companies. The DHSC publishes this as part of routine reporting in the voluntary scheme quarterly net sales and payment information. At the time of writing, the latest data was from November 2020 and illustrates that, according to unaudited data, over £1,127 million has been paid by VPAS members. A further £87 million has been paid by companies under the statutory scheme since January 2019. This is relevant because the statutory scheme was re-cast to be similar to the VPAS and payments are due for companies even if they don’t choose to be a member of VPAS. 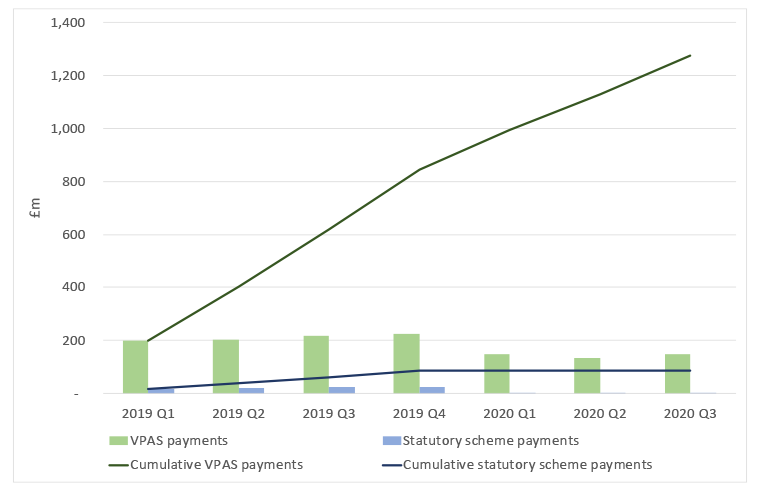 Source: Data from DHSC. Note: Statutory Scheme payments were £1 million in all three quarters of 2020 and hence are not large enough to show up on the graph given the scale required to illustrate VPAS cumulative payments.

When it comes to the future under this objective, there is a lag to draw a final conclusion even once the current scheme ends on the 31 December 2023 as there is scope for any under or overpayments to be paid up until 2025.

The Voluntary Scheme namechecks the aim for efficient and competitive supply of medicines in requirements to report any changes in overall distribution arrangements in Chapter 6.

It’s hard to know how well the requirements to report are going as nothing was found in the public domain. There is no public list of medicines in shortage in the UK but there have been reports of shortages during 2020, with many putting the blame at the door of Brexit. How far this is about branded medicines versus generics is unclear.

Generics are used a lot by the NHS; around 75% of prescriptions were generic in 2017 according to a 2019 report from Oxera. The VPAS, in Chapter 6, includes the proviso that members of the VPAS shouldn’t take any unreasonable or anti-competitive action that would delay or discourage generic entry.

It would likely be the Competition and Markets Authority who would take action should a branded medicine manufacturer was to act in an uncompetitive way. Whilst a full review of CMA cases wasn’t undertaken, it is clear that companies are warned of the consequences should they be tempted through the case of Merck Sharp & Dohme (MSD) and their discount scheme for Remicade. In 2019, the CMA found that competition hadn’t been affected in practice so did not take action against MSD, but had the discount worked it would have led to consequences for the firm.

VPAS delivering for government but should there be a rethink on what is affordable?

The bigger question remains whether a 2% growth rate is the appropriate rate to determine what is affordable. Is that 2% still the case today, in a post-COVID-19 pandemic world? Determining what is affordable should not just be arbitrary; it is after all a function of the wider economy (if the economy is growing then perhaps it is affordable to spend more on medicines, especially on those that are cost-effective and the converse could apply too) as well as political decisions on the priority for NHS spending versus other areas of spend.