NICE numbers at 20: trends in deals

NICE provides a downloadable excel file of details of Technology Appraisal (TAs) recommendations which can help explore trends in deals that play a role in NICE recommendations made. Leela Barham coded the data to look at the changes over time.

There have been a host of changes at the UK’s Health Technology Assessment (HTA) agency –  National Institute for Health and Care Excellence (NICE) – over its 20 year history, and one of these relates to the option for companies to offer a deal that can then be taken into account by NICE.

The terminology isn’t strictly the offer of deals, instead there can be prices secured via the Commercial Medicines Unit (CMU) which is now part of NHS England, or a Commercial Arrangement (CA), Commercial Access Agreement (CAA), the Cancer Drugs Fund (CDF), the CDF along with a Managed Access Agreement (MAA), Discounted Price (DP), a MAA alone, a Patient Access Scheme (PAS) or Simple Discount Agreement (SDA).

All of these terms are in the NICE excel file, but all amount to a bespoke arrangement agreed that NICE takes account of how – not just through a lower price – the deal affects cost effectiveness.

“There is the possibility, even if rare, that a deal is offered but it’s still not able to convince NICE to say yes”

Any agreement reached by an individual company is typically going to be with NHS England, not with NICE. NICE staff play an enabling role not only via providing support to NICE Appraisal Committees – those who make NICE recommendations – in considering how the deal can affect the cost-effectiveness and potentially the future evidence available for a review by NICE in the coming years, but also because they can help via early engagement.

NHS England is the largest buyer of specialised drugs in the NHS in the UK, and so the trend in deals can also be seen as an indirect measure of the importance and influence of NHS England.

With the other devolved nations also able to use deals struck in England – a commitment made within the overarching deal of the 2019 Voluntary Scheme for Branded Medicines Pricing and Access (VPAS) struck by the industry association, ABPI, and the UK Government – it’s also an indicator of the potential need for deals to cover the whole of the UK in the future. 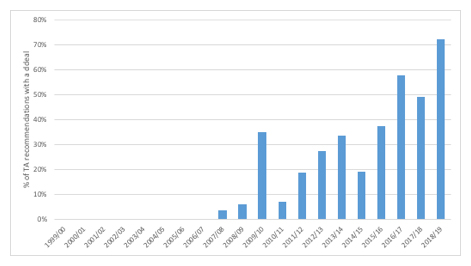 Comparing NICE recommendations made with or without a deal in place since 2007/8 – when the first deal was referenced by NICE – illustrates that they are helping to secure positive or optimised recommendations (figure 2). Yet there is also the possibility, even if rare, that a deal is offered but it’s still not able to convince NICE to say yes. 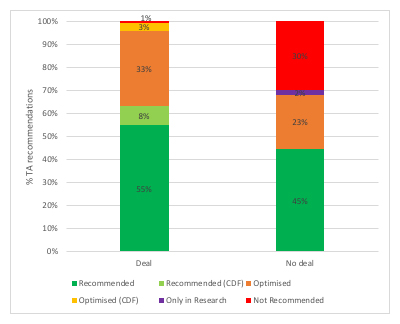 The full details of deals made between individual companies and NHS England are not in the public domain, particularly the financial elements. In fact, that’s an intrinsic part of their appeal to companies because UK list prices are often looked at by other countries when they set their reimbursement prices.

There are consequences though about the increasing number of deals struck and the difference between list prices and real transaction prices; drugs that have been looked at by NICE recently are more and more likely to have UK list prices adrift from the real price paid.

Whether or not this is good or bad is unclear since there are arguments made for keeping confidentiality to enable companies to price to the specific country’s needs; revealing low prices could mean companies stop discounting to some countries to help secure higher prices in others. Yet the very presence of big differences in list and real prices paid undermines international reference pricing (IRP) in other countries (something President Trump might like to consider given proposals for IRP in the US).

There’s a much larger debate on price transparency happening globally, and since the UK is not the only market where deals that keep real prices paid secret are common, it’s going to be a difficult situation to unravel.

The future in the UK: more but different deals?

Based on current trends it would seem reasonable to expect to see deals as a core feature of securing NICE recommendations and access with NHS England, and that this will continue into the future.

There may yet be more complex deals struck though. There are some indications that new approaches, such as portfolio deals. For example, NHS England offered such a portfolio deal to Vertex for their cystic fibrosis drugs, although in that case no deal was agreed (yet). A new commercial framework is also expected from NHS England, and that could either help or hinder future deal making.

Patient Engagement is no longer optional