2021 will be the year when big market access changes – including the far wider use of health economic evaluation – are implemented in Spain. In the latest of a suite of features looking at the biggest markets in Europe, Leela Barham takes stock of what 2021 could bring for market access in Spain.

Spain, like many European countries, have seen biosimilars as a route to helping manage pressure on health care spending. Back in 2020 savings from biosimilars were forecasted to really get going in that year and through to 2022. In part this is driven by policies that require discounts against originators as well an action plan from the Comisión Permanente de Farmacia (Standing Commission on Pharmacy, CPF).

Throughout 2020 details emerged about a new network that will see health economics become part of informes de posicionamiento terapéutico (therapeutic positioning reports, IPTs). The network, the Red de Evaluación de Medicamentos (Pharmaceutical Evaluation Network, Revalmed), is part of efforts to consolidate work that goes into the IPTs. Revalmed was formally launched in November 2020.

Revalmed is a joint collaboration between the Directorate General for the Common Portfolio of Services (DGCCS), the Agencia Española de Medicamentos y Productos Sanitarios (Spanish Medicines Agency, AEMPS) and the 17 autonomous communities. Revalmed is structured around working groups and coordination of those groups, set out in figure 1. 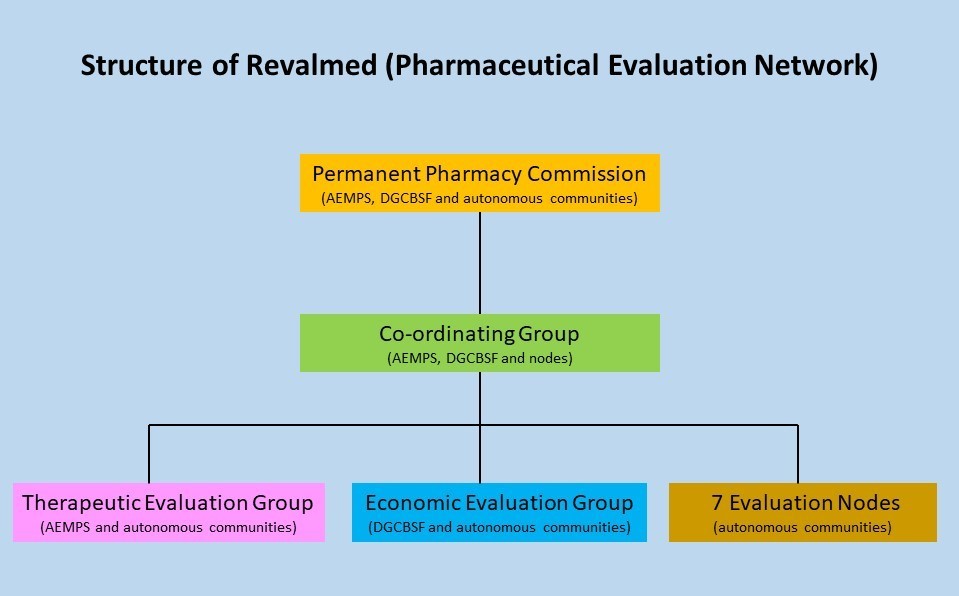 Proof will be in the pudding but health economics is primed to play a far bigger role in market access in 2021 in Spain.

The health economic component of the revamped IPTs is informed by guidelines from the Grupo de Evaluación de Novedades, EStandarización e Investigación en Selección de Medicamentos (Group for the Evaluation of Innovations, Standardisation and Research in Drug Selection, GENESIS).

Companies are going to have to provide a range of information to support the health economic evaluations including acquisition price, dosing, cost per day/cycle, cost of full treatment or treatment/year amongst other data. The economic evaluation will vary; it might be a cost-minimisation analysis or a cost-effectiveness analysis and should also include budget impact. Reflecting the need for regional perspectives, the budget impact will be at the regional level.

“Proof will be in the pudding but health economics is primed to play a far bigger role in market access in 2021 in Spain”
It’s really part of a broader evolution of IPTs, which are still relatively new, having been introduced in 2013. Whilst they could ask for health economic data, according to comments on LinkedIn this happened rarely. IPTs have also not successfully convinced all stakeholders of their utility; autonomous communities were reportedly resistant to their use and they have, in the past, taken a long time to prepare (around 265 days). Adding in additional reviews by the autonomous communities could add years to access.

Work on an individual IPT should take a maximum of 90-95 days although final outputs will reflect just when the coordination group meets. Timeliness are going to be managed through a scorecard and companies whose treatments go through the new approach should be kept up to date on progress.

Quarter 1 of 2021 is going to be a real test of the plans; pilot projects will be completed with a product that comes from each of seven therapeutic areas. The seven areas include: immune disease, rare diseases and advanced therapies, anti-infectives, solid tumours, haematological oncology, central nervous system disorders and cardiovascular disease and risk factors.

What’s still unclear is what status these reformed IPTs will really have and whether the ambitions to speed things up will materialise. More will be known as rollout happens throughout 2021 and beyond.

Osteoporosis treatment options – down to the bare bones