The market access landscape in Germany is particularly interesting in 2021, as a key component – AMNOG – is ten years old, and that milestone prompts reflections on what has worked well and what needs reform. In the latest of a suite of features looking at the biggest markets in Europe, Leela Barham takes stock of what 2021 could bring for market access in Germany.

Early in 2020 a law was passed in Germany which reaffirmed the ability of Gemeinsame Bundesausschuss (G-BA), the Federal Joint Committee, to require the collection of Real World Evidence (RWE) from launch for Advanced Therapy Medicinal Products (ATMPs). The G-BA assesses all new medicines and determines their added benefit.

The Institut für Qualität und Wirtschaftlichkeit im Gesundheitswesen (IQWiG), the Institute for Quality and Efficiency in Health Care, followed up with a G-BA commissioned report that looked at use of RWE, seeing some potential for registries to help inform early benefit assessments. IQWiG conducts assessments of new drugs and their recommendations are an input into G-BA thinking. IQWiG sees far less promise in other RWE sources such as electronic medical records and billing records of insurers.

Mandatory RWE was set out for Novartis’ gene therapy for spinal muscular atrophy (SMA) zolgensma (onasemnogene abeparvovec) in February 2021. Novartis will run a registry study to include up to 500 children with pre-symptomatic SMA and with SMA type 1 and type 2. The comparator is to be Biogen’s Spinraza (nusinersen). This might be revealing for the case of orphan drugs but those hoping registries can help improve their ratings need to be aware of their limited scope, a view expressed by the G-BA’s Chairman.

Zolgensma is a treatment worth watching, not only as it could give clues about the development of registries, but also because it’s one of the few examples of a outcomes-based deal in a country that doesn’t tend to use them and where there seems little appetite for that to change. Such deals are not national but can be agreed at the insurer level. This is just what Novartis did, securing the deal with the Gesellschaft für Wirtschaftlichkeit und Qualität für Krankenkassen (GWQ) insurer in April 2020.

“Any changes to AMNOG will likely be a worry to industry as there has already been a toughening in AMNOG assessments since 2011.”

It’s also an orphan drug that has had to switch from the lighter touch AMNOG assessment given to orphan drugs – assumed to offer additional benefit – into the standard approach. This change was prompted by spend going beyond EUR50million. The results of this won’t come out until November 2021 and will be seen as provisional. The registry study will presumably feed into the longer-term assessment of additional benefit, expected in 2027.

The AMNOG (Act on the Reform of the Market for Medicinal Products) was implemented on the 1 January 2011. As AMNOG passed the milestone of ten years in January 2021, stakeholders are reflecting on the approach. Key features include free pricing for the first year on the German market whilst the added value of new treatments is determined which then informs price negotiation.

The Chairman of the G-BA is reportedly interested in a change to AMNOG where G-BA could get a rebate to cover six months of spend, if the negotiated price is lower than the price charged by the company in those first 12 months of free pricing. The Chairman is also reportedly interested in limiting the price of those treatments used in combination in cancer. As an aside, it’s the relatively high prices seen in Germany that has led to the Netherlands dropping Germany from their reference price basket.

Germany’s Allgemeine Ortskrankenkasse (AOK), the biggest group of insurers in Germany, has been calling for changes too. They’d like to see an end to free pricing and have been advocating for a process to set an interim price and access to the market limited to nine months, instead of 12, before negotiations conclude.

Any changes to AMNOG will likely be a worry to industry as there has already been a toughening in AMNOG assessments since 2011 (see figure 1). 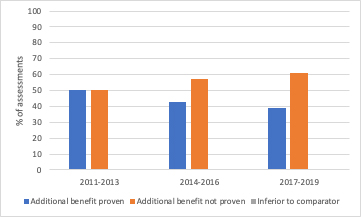 Yet some see hope in Germany; spending on medicines is allowed to increase 4.6% in part to help accommodate innovative drugs. There is even speculation that Germany could establish special funds to pay for innovative therapies.

Meanwhile, just like many countries, the Germans have seen the potential for savings from the use of biosimilars. In 2020 discussion on how to promote biosimilars and moved into guidelines from the G-BA to encourage physicians to start prescribing biosimilars, including adjustments to their budgets. In 2021 we might see the ripples from such policies come into the market.

Enabling innovation by connecting an ecosystem of partners

COVID-19 has been a shock to the system for every industry, not least pharma, but the sector is already looking at new ways to build resilience for the future.