There is a quiet force in the biopharmaceutical industry that could have notable implications.

The industry is clearly undergoing compressive disruption, which is what happens — often slowly and stealthily — when a series of innovations, macroeconomic factors and other changes combine to squeeze profits over a decade or more.

Consider the warning signs: Accenture research shows that, as a percentage of enterprise value, the future value of the biopharma industry shrank from 42% in 2015 to 28% in 2018 — indicating diminishing investor confidence in future earnings. The average tenure for a market-leading treatment in a therapeutic area has dropped 51% in less than two decades, from 10.5 years in 2000 to 5.1 years in 2017. And while more treatments have been coming to market recently — the FDA approved a record-high 59 new molecular entities in 2018 — many of these medicines are highly specialised and treat smaller patient populations. As a result, they often don’t generate peak revenues for the duration that they used to, putting pipeline-replacement ratios under pressure.

“To lead in and acquire New Science, executives will need to consider investing in an ecosystem of smaller, less-proven biotechs”

Yet some biopharma companies have found a way to deliver exceptional growth amidst this compressive disruption. They’re embracing what’s known as ‘New Science’, which is the combination of the best in science alone, and medicines based on health technology, such as digital therapeutics, companion diagnostics, and treatment delivery systems.

These technologies are not necessarily new, but the investment levels are substantial for those leading in New Science — six to seven times as much as their peers. Methods and technologies, such as biomarker-based development and companion diagnostics, are helping fuel this R&D success. These approaches inject more precision into the traditional development process and support real-world evidence of an improved patient outcome, helping regulators reach positive conclusions more rapidly. Companies at the forefront of New Science are investing heavily in emerging technology to improve R&D and clinical outcomes, as well as the patient experience.

While conventional thinking suggests that more-innovative treatments are riskier to develop, a New Science approach is more likely to succeed — and in some cases, get to market more quickly. Indeed, our research shows that New Science has a 50% higher probability of technical and regulatory success compared to other new molecular entities (NMEs) and new biological entities (NBEs). Accenture analysis revealed a 10.8% success rate for New Science compared to 7.2% for other NMEs and new biologic entities (NBEs). 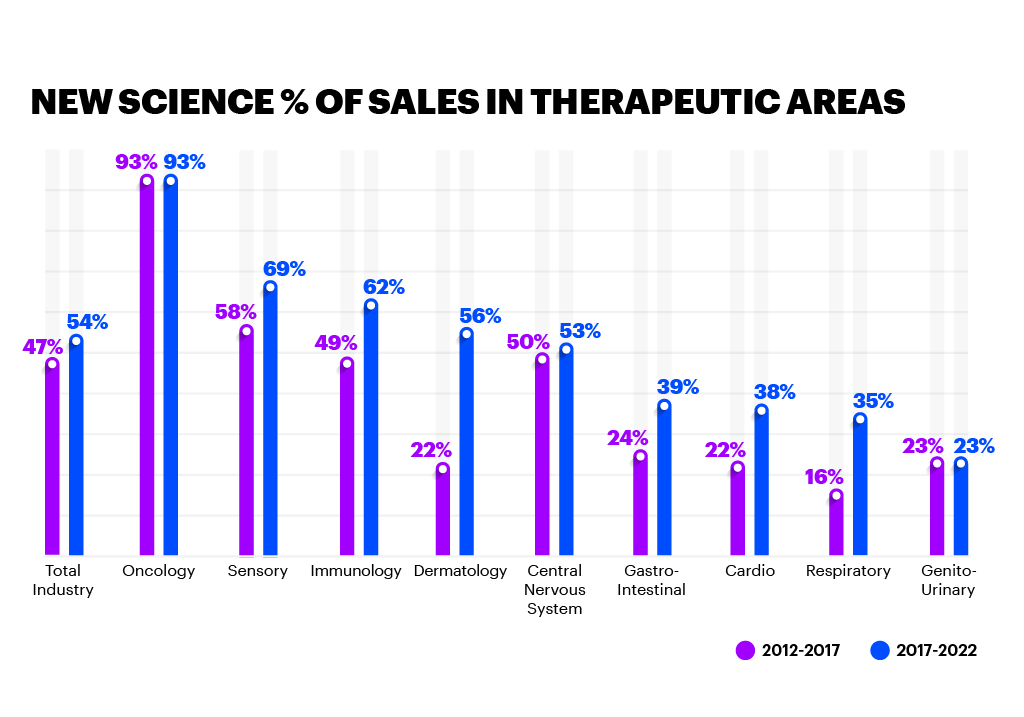 It’s true that New Science can carry a higher price tag than traditional medicines, but our research shows that many regulatory bodies recognise the profound impact these more specialised treatments have in improving the standard of patient care. As a result, they’re changing their approval processes, as well as applying technology and process improvements to update their guidance to biopharma companies on how to run clinical trials and improve the patient experience.

For example, the FDA has multiple designations for new products to qualify ones as “breakthrough” and “fast track” them through approval. The European Medicines Agency introduced its PRIME (Priority Medicines) program of accelerated approval and priority review in 2016. And there are several other examples around the world. Many regulatory bodies are also applying technology and process improvements to update their guidance to biopharma on how to run clinical trials and improve the patient experience.

The rise in New Science is also evident in the number of FDA-approved therapies that used at least one biomarker or specific combination of biomarkers for either patient identification or an endpoint. The number of these biomarker-enabled medicines grew from 74 in 2012 to 104 in 2017.

New Science is also changing the M&A playing field. Major biopharma companies have traditionally invested in large biotech companies, which have more-mature assets and pipelines with stronger indications of market success. Roche’s acquisition of Genentech and BMS’s pending acquisition of Celgene, and Abbvie’s interest in Allergan are good examples of this practice. However, to lead in and acquire New Science, executives will need to consider investing in an ecosystem of smaller, less-proven biotechs, as these will become more prevalent and drive biotech growth. To accommodate this shift, executives will need to reconfigure investment and R&D sourcing models to consider not just acquiring a molecule, but the opportunity to acquire technology and talent as well.

The business case is clear: New Science — which offers a better way to treat and care for patients in ways not previously attainable — will drive most of the industry’s growth and reshape the landscape. And by pivoting wisely and making the right investments, life sciences companies can realise its promises. Those that don’t embrace New Science risk falling behind.

Stuart Henderson is the senior managing director and global lead of Accenture’s Life Sciences practice. He has more than 20 years of experience in the biopharmaceutical industry.

Virtual healthcare during pandemic has won patients over; survey