Preventive care programmes are key to better health outcomes, but several factors are limiting their uptake. A new analysis looks at these barriers and asks how they could be overcome.

Over the past decade, many healthcare systems have worked to expand their focus on health maintenance and disease prevention as several studies have indicated that preventive care services can play a significant role in improving general health while helping reduce long term healthcare costs.

Strategies include different options focused on health maintenance, such as vaccination programmes, smoking cessation services, support for physical activity, and access to technologies that support early detection of diseases. In addition to representing more efficient and cost-effective options in healthcare coverage, these measures offer the prospect of positive health outcomes and quality of life for patients.

While the benefits of preventive measures are established, integration of many options can be limited when payers do not agree on what are considered adequate or optimal levels of preventive care.

This is especially true when preventive care involves a direct cost to payers. CRA’s Life Sciences Practice recently conducted an analysis of the barriers that currently limit reimbursement for many preventive care services and how the evolution of healthcare systems and preventive care offerings could change the demand and uptake of preventive care by 2030.

The analysis found that a range of factors including significant upfront costs, limited allocation of healthcare budgets to cover preventive care, and the focus on short-term or quarterly cost savings, rather than longer term strategies in managing care, are limiting adoption of preventive care programmes among payers.

From both a business and a societal perspective, in many cases payers consider preventive care as sub-optimal because it is positioned to deliver clinical and economic benefits over a longer timeframe – often years or decades.

Many other industry stakeholders, including medical organisations and government agencies, consider preventive care to be a good investment. They cite preventive care programmes as critical for improving the general health of a population and addressing many major global health issues effectively. These stakeholders also are in position to benefit from strategies that will deliver net reductions in healthcare costs over the long term.

For example, according to the US Centers for Disease Control and Prevention (CDC), “chronic diseases that are avoidable through preventive care services account for 75% of the nation’s healthcare spending and lower economic output in the US by $260 billion a year. If everyone in the country received recommended clinical care, then the healthcare system could save over 100,000 lives a year.”

CRA’s findings also show that if decisions on the adoption of preventive care services are left to individual stakeholders such as payers who focus mainly on short-term cost effectiveness, use of these measures may be limited.

This limitation is also reflected in the fact that, on average, countries that are part of the Organisation for Economic Co-operation and Development (OECD) did not increase the percentage of their healthcare budgets allocated to preventive care between 2010 and 2017 (2.8%), despite the need for many of these countries to adopt measures to control healthcare spending (Figure 1). 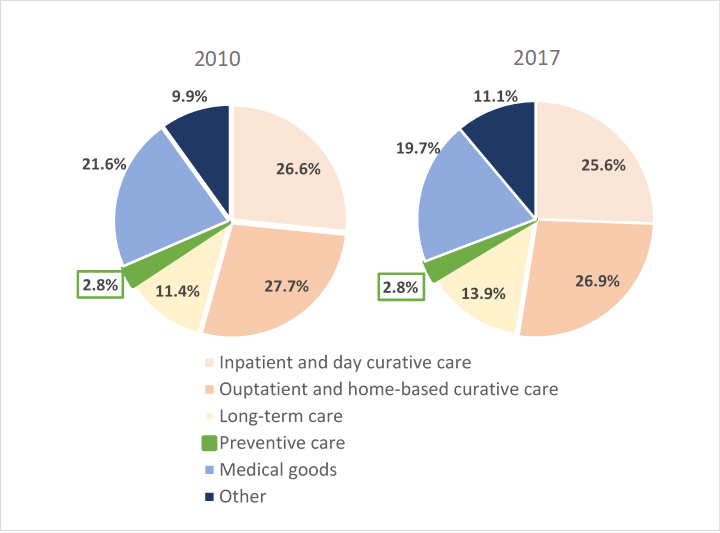 Independent global advisors are advocating that the preventive healthcare model must operate beyond the limitations of short-term cost assessments favored by many political and healthcare decision-makers.

The reason is based on both economic and societal benefits. If preventive measures that can deliver cost benefits and improved health over the longer term are not implemented, healthcare systems risk a continued escalation in demand for care which, in turn, may be more costly than implementation of preventive measures in a timely manner.

The fact that payers must allocate resources based on limited annual budgets is another factor leading them to deprioritise many preventive care measures, especially those that require significant upfront investment. Preventive care typically targets large patient populations and has a considerable impact on budgets, even though the cost per patient will often be relatively low. Payers also often have difficulties forecasting the cost-effectiveness of preventive care and thus can be uncertain about the true budget impact.

Even in cases where payers allocate resources to preventive care services, research shows that many may not be allocating those funds as effectively as possible. Misallocation of funding is often the result of payers trying to meet patients’ expectations on services that will be covered rather than focusing on the most efficient approach. On average, nearly half of all preventive care spending is allocated to patient monitoring (e.g. health or dental check-ups), rather than to support immunisation and early disease detection, which have been shown to be more effective.

There are also unique challenges in adoption of many preventive care services in multi-payer systems. As patients move across payers, the economic benefits from an investment in preventive care will likely be realised by a different payer than the one who originally funded the preventive service or programme.

To address any gaps in healthcare funding, some payers are prioritising preventive care measures that deliver nearer-term cost savings rather than cost effectiveness. For example, offering the seasonal influenza vaccine to healthy working-age adults is a cost-saving preventive measure (generating net savings of $68.96 per person in the US) and is widely adopted.

In contrast, vascular disease health checks are a cost-effective preventive measure for the broad population, but access is often limited to only high-risk patients.

How could payer views change by 2030?

By 2030, there will likely be more data available demonstrating the longer-term benefits of preventive care, suggesting that payers may have fewer concerns over cost effectiveness. Some payers may also come under increased societal and governmental pressure to allocate more funding to preventive care services. For example, government advisors are proposing that Nordic countries should allocate equal amounts to sick care and preventive care (5% of GDP to each) by 2030.

Currently, 3% of global healthcare budgets are allocated to preventive services but a recent analysis projects that this will increase to 9% by 2030 (Figure 2).

This shift in fund allocation is also supported by the fact that integration of preventive care measures could be considered the more cost-effective option as more innovative, targeted (and potentially curative) treatments are developed and become commercially available. As a result, healthcare decision-makers, including payers, are expected to push for broader adoption of preventive care programmes that could delay or eliminate the onset of disease and the associated need for treatment among high-risk patients. 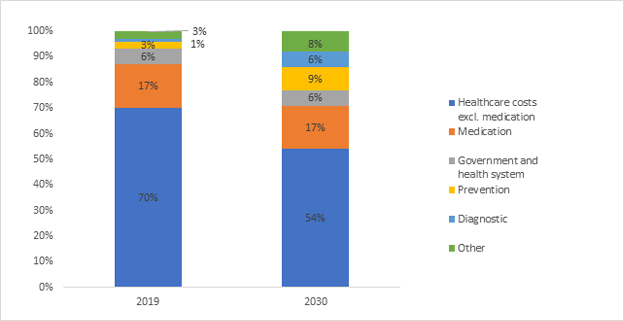 Figure 2: How the allocation of healthcare budgets is expected to change by 2030

In one example, genetic testing would allow patients with a high risk of developing some diseases to receive more targeted preventive care including routine screening and biomarker checks. This is currently the case for women with a variant of the breast cancer (BRCA) gene, which greatly increases their chance of developing breast and ovarian cancers and is readily identifiable through testing.

With the development of more targeted and effective preventive solutions, increasing payer willingness to cover them, and growing demand for these services among patients, many healthcare stakeholders expect that both access and uptake will expand and evolve significantly in future. This shift toward broader adoption of preventive care services can support improved sustainability of healthcare budgets and presents many new and more effective opportunities to improve the health and outcomes of patients around the world.