Richard Henderson, an influential figure in UK biotech research, has won the Nobel Prize for Chemistry for his work allowing scientists to see the three-dimensional structure of proteins for the first time.

Henderson, who works for the MRC Laboratory of Molecular Biology (LMB) in Cambridge, was awarded the prize together with Jacques Dubochet, from the University of Lausanne in Switzerland, and Joachim Frank of Columbia University in New York.

The trio were awarded the prize for “developing cryo-electron microscopy for the high-resolution structure determination of biomolecules in solution”. 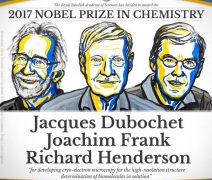 As well as his work at MRC, Henderson was co-founder of the UK biotech Heptares in 2007, along with its current CEO Malcolm Weir, and Fiona Marshall and Chris Tate.

Born and educated in Scotland, Henderson got a PhD at Cambridge University before working at Yale University.

He then returned to the LMB where he has been working since 1973 on using electron microscopy to solve complex membrane protein structures.

After pioneering work with electron microscopes in the 1970s, Henderson realised that it would be possible to extract enough signal from randomly dispersed molecules using electron microscopy to obtain their detailed atomic structures.

This led to better detectors for electron microscopes, and the crucial work of Dubochet, who devised a way to flash-cool molecules in a thin layer of aqueous solution before imaging them.

Processing the images with a computer is a key step, to which Joachim Frank made major early contributions.

The progress in protein imagery has allowed valuable insights into their biological function, catalysing development of diagnostic and therapeutic tools.

Henderson has recently been awarded the Gjonnes Medal in electron crystallography by the International Union of Crystallography, is a Fellow of the Royal Society and the Academy of Medical Sciences, and was director of the LMB from 1996-2006.