Two senior ministers have put forward a bold plan to keep the UK closely aligned with the European Medicines Agency after Brexit.

In a letter to the Financial Times, health secretary Jeremy Hunt, and Greg Clark, business secretary, said the UK government is committed to collaborating with the EU on medicines regulation after Brexit.

The ministers said: “We want deep, broad and dynamic co-operation and in this context, the UK would like to find a way to continue to collaborate with the EU, in the interests of public health and safety.”

The ministers are supporting an imaginative solution to the Brexit riddle – how to exit the EU and leave the EMA group, yet retain as many of its advantages as possible.

The plan is for the UK medicines regulator the MHRA to continue to participate in EMA scientific assessments. Then, when a recommendation has been agreed, separate but identical proposals could be sent to Brussels and London for authorisation. 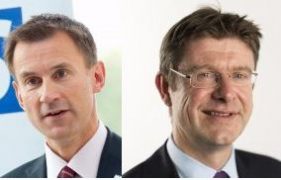 “Our door will always be open to a deep and special relationship with the EU which remains the best way to promote improved patient outcomes both in Europe and globally,” they added.

From the perspective of the remaining EU27 countries, however, this is almost certain to look like the UK ‘having its cake and eating it’ – and would therefore face rejection in negotiations.

Based in Canary Wharf, London, the EMA’s presence in the capital is considered a major asset for the UK’s life sciences industry.

Established in 1995, the presence of the EMA has attracted many pharma and life sciences companies to the country and the government wants to ensure investment from industry continues after Brexit.

But with the EMA certain to move after the UK quits Europe, the government is trying to find a work-around that will allow the country to participate in the European drugs regulatory framework without being party to decisions by the European Court of Justice.

This would allow the UK to use the European regulation system without having to be governed by the ECJ.

The EMA is one of at least 34 European regulators that will have to be replaced or maintained as the UK leaves the EU.

Industry figures welcomed the intervention. AstraZeneca’s CEO, Pascal Soriot told the newspaper that securing an agreement with the EU “enables innovative companies like ours to access scientific talent and rely on efficient supply chains as well as integrated medicines regulation will be critical to our sustainable success”.

Association of the British Pharmaceutical Industry chief executive Mike Thompson told the FT: “This letter is a welcome recognition that the future of medicines regulation is a key priority for the government as we negotiate a new relationship with the EU.

“It also signals a readiness to take a pragmatic approach to Brexit negotiations that puts people’s health first. This is a great first step and we look forward to seeing more detail in the coming weeks and months.”

As the FT points out, the move by the health and business secretaries also exposes divisions within the government. Both Hunt and Clark, previous campaigners to Remain, are both supporters of a ‘soft’ Brexit, and the new suggestion is a clear break from their tone before the UK general election, when ministers followed the more hard-nose pronouncements of prime minister Theresa May and Brexit secretary David Davis.