A group of breast cancer campaigners has joined Breast Cancer Now in delivering a petition to Roche’s UK headquarters, demanding that it drops the price of its breast cancer drug Kadcyla. 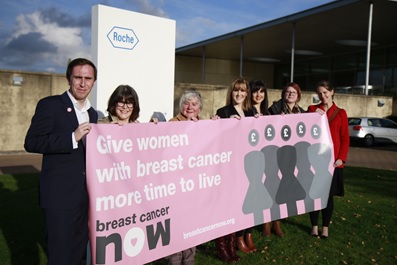 Roche’s drug was one of a number named in the Cancer Drugs Fund (CDF) de-listing process last month and funding for these treatments will cease from next Wednesday 4 November.

Breast Cancer Now says Roche should agree to a price cut – even as a temporary measure – so that Kadcyla can stay on the CDF to allow continued access to it in England.

Launched at the beginning of October via Change.org to mark the start of Breast Cancer Awareness Month, more than 42,000 people have added their signatures to the petition.

Among the many battles over access to cancer drugs in England, the charity’s decision to call directly on a pharma company to lower its prices is unprecedented.

Its decision to put pressure on Roche rather than NHS England (which oversees the CDF) reflects growing scrutiny of pharma drug pricing, particularly in cancer.

Kadcyla (trastuzumab emtansine or TDM-1) is the first and only targeted chemotherapy drug for secondary breast cancer. While the price of the drug is high, there remains confusion about its precise cost. Breast Cancer Now says it costs on average more than £70,000 per year per patient, but speaking to pharmaphorum earlier this month, Roche said discounts meant the drug cost around £45,000.

Breast Cancer Now says it believes responsibility lies with Roche to drop its price to “a level that the NHS can afford” and it remains hopeful a deal can be done before the deadline.

Roche has not issued any new statements in recent weeks, but has indicated that it will be negotiating with NHS England on price and access right up until the deadline.

Baroness Delyth Morgan, chief executive at Breast Cancer Now, said treatment options for secondary breast cancer are limited and time is running out for women who would benefit from Kadcyla: “We need a completely overhauled system of pricing and access, but until this is finally in place Roche must do what it can to keep this highly effective drug available through the Cancer Drugs Fund.” 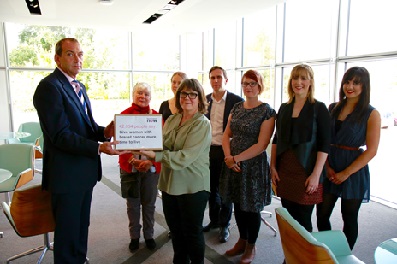 Trials show the drug gives an average of six months of extra life for patients, but the charity points out that many women have been given extra years rather than months.

Julie Strelley-Jones, 44, from London and a mother of two young children, is currently living with secondary breast cancer and being treated with Kadcyla: “I cannot express how angry I am at the decision to remove this drug from the fund. It is so wrong on every level.

“I have been on Kadcyla now for 18 months and my latest scan results showed no evidence of active cancer in the body at all and only scarring on the brain from two separate radiotherapy treatments that targeted two tumours in my brain. It shocks me to the core that this drug may not be available for others.”

The charity says a temporary price drop to keep Kadcyla on the CDF is now the only option to ensure continued access until the wider problems with the system are worked through.

However a temporary price drop is impractical for pharma companies, as there is limited scope to return to a higher price within the UK’s system.

NHS England has already outlined proposals for a major change to the CDF, it becoming a ‘managed access’ fund linked to NICE from April 2016.