Senior scientists from the UK’s two big pharma companies GlaxoSmithKline and AstraZeneca say only a rapid and significant increase in government R&D spending will boost the UK life sciences sector – and anything else is just ‘tinkering’.

Dave Allen, senior vice president respiratory disease R&D at GSK and Mene Pangalos, executive vice-president of Innovative Medicines and Early Development (IMED) unit at AstraZeneca were giving evidence this morning to an inquiry by the House of Lords Science and Technology Committee.

The parliamentary committee is probing the recent Life Sciences Industrial Strategy, the latest in a long line of industry-backed reports aimed at supercharging the UK sector.

Overseen by academic life sciences leader Sir John Bell, the report is comprehensive and ambitious in setting new growth targets for the sector – but there is great scepticism in the industry about whether the government will follow through on its recommendations.

A key recommendation was for the UK government to increase its funding of R&D to around 2.6% of GDP over the next five years, from its 2015 level of around 1.7%.

The Industrial Strategy report says the UK is currently well down the rankings in terms of research investment as a percentage of GDP, far behind countries such Germany and the US, who spend around 3%, and Israel and South Korea who spend well over 4%.

Sir John Bell’s report said an increase in spending was ‘essential’ to put it into the top quartile of OECD countries.

The report says this must be done over the next five years . The signals from the government are that they will commit to meeting this target- but over a much longer 10 year period.

The reason for this reluctance from government is clear: chancellor Philip Hammond is not optimistic about the UK economy’s outlook, especially as it faces up to a potential Hard Brexit. Hammond said last week that such an event could cost the country billions through disruption to trade and business.

Dave Allen praised the report and said it had the right level of ambition, but was worried about whether its most important recommendations would be put into practice.

“The report is excellent, the ambition is right – I think this is all about implementation.”

He said he worried if the report would ever get implemented, or in a ‘sensible timeframe’ and harked back to many previous ambitious masterplans for the sector which have only been partially implemented at best.

Both scientists said the NHS had the potential to be a world leader in areas such as genomics and real world data, but was currently let down by regional fragmentation and slow uptake of new medicines. 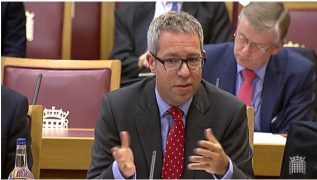 Mene Pangalos acknowledged the increased R&D spend was a big commitment, but said it would only have an impact if carried out rapidly.

“I’d say we need it to be done over a five year period, not a 10 year period. You need to do this fast.

“If we tinker around the edges with a billion here and a billion there, it is not going to have the impact that we want that will create a world class life sciences industrial sector in the UK.”

He added that such targets needed to come with someone who could be held accountable for delivering on the investment, most probably through a joint public-private alliance.

Dave Allen agreed: “Substantially more money is required to make this happen. All the current things [initiatives] are great, but they are just not sufficient, and they are piecemeal. We do need the strategy to tie it all together.”

Mene Pangalos and Dave Allen also expressed fears about Brexit, in particular the problems of attracting talent to the UK, losing out on EU scientific grant funding, and a potential loss of regulatory alignment with the European Medicines Agency.

Pangalos is standing in for AstraZeneca’s CEO Pascal Soriot at a high level meeting with ministers on Brexit today.

Pressure is rising on the UK government to ensure the country gets some kind of Brexit deal before it leaves the EU, but time is running out and EU political leaders are refusing to move on to trade talks before a ‘divorce settlement’ is agreed.

Pangalos warned that he was now concerned about the impact of Brexit on recruitment to AZ, with EU candidates turning down jobs in the UK because of the uncertainty around immigration rights.