Men with advanced prostate cancer are being denied access to a breakthrough treatment for the disease – despite it being low cost, and based on UK research.

The chemotherapy drug docetaxel has been around for decades, but new research shows if used earlier, it can help men with metastatic prostate cancer live much longer – adding 22 months of life on average.

This is a massive increase in overall survival, a huge benefit rarely seen in any clinical trials. But NHS England and other regional bodies across the country are currently ignoring the new evidence – this means thousands of men could be missing out on the breakthrough and many extra months of life.

Professor Nick James of the University of Warwick is the chief investigator in the STAMPEDE trial, and presented the new data in at the ASCO cancer congress in May.

The research boosts a growing international consensus among oncologists that the drug should be a first line treatment (in combination with standard hormone therapy called ADT) for men with metastatic disease.

Prof James is urging NHS England to recommend the drug as standard treatment on the NHS without delay.

“The benefit of this drug is huge – almost a two-year improvement to survival. I don’t think it is reasonable to ignore that.

“This is a 25 per cent gain in overall survival in one of the biggest cancer killers. That’s not something you want to kick into the long grass because of a procedural technicality.”

One of the ‘procedural technicalities’ is that because docetaxel is now off-patent (previously marketed by Sanofi as Taxotere), the drug is not licensed for this earlier use. This also means neither NICE nor the Cancer Drugs Fund (CDF), the two funding watchdogs, can review it in this setting. 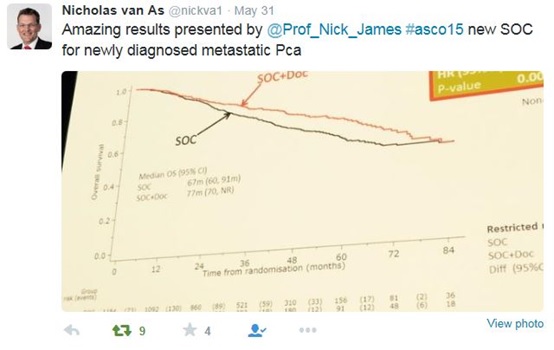 Prof James says his research team doesn’t have the capabilities to seek a new licence for the drug, but says NHS England should see sense for the sake of patients. While some men with metastatic disease may not be fit to receive the chemotherapy, he estimates as many as 5,000 could benefit from receiving the drug earlier.

“Our argument is that they [NHS England] should be a bit more flexible – especially as this will be a very affordable price, even a cost saving.”

NHS England is understood to be refusing to give its approval because of the associated costs of nurses and doctors administering the drug, but Prof James says this doesn’t make sense, as it merely involves giving the same drug, but earlier.

In fact, the research shows that six cycles of treatment at diagnosis can give 22 months of extra survival on average, versus the 10 cycles currently given later, which typically only gives three months of extra life.

“You give less of the same treatment, for a much bigger survival benefit,” says Prof James.

NHS England has been contacted but has not yet commented on these issues.

Variation across the country

Prof James says some parts of the country are simply going ahead and using the drug earlier, but many are waiting for formal approval. Only one part of the UK – the West of Scotland – has been quick to react to the data, and has mandated the drug’s earlier use.

A further irony is that the research has been funded and carried out on patients in the UK. Cancer Research UK and the publicly-funded Cancer Research Network are funding the long-term STAMPEDE programme, which is looking at combining old and new drugs to find the best combination for different patient types.

Finally, because docetaxel is off-patent, the cost of the drug is a fraction of the tens of thousands it costs to pay for the newest treatments – but its results in prolonging life have outshone many of these.

Commenting on the controversial CDF, created to pay for these new high cost treatments, but which cannot appraise docetaxel, Prof James added: “In CDF terms, this would be extraordinarily good value.”

Around 42,000 men are diagnosed with prostate cancer each year, and nearly 11,000 die from the disease annually.

Dr Sarah Cant, Director of Policy and Strategy at Prostate Cancer UK said: “It’s incredibly exciting that docetaxel chemotherapy for advanced prostate cancer has been shown to have a much greater impact on survival when prescribed earlier and alongside hormone therapy.

“It is now crucial that health services across the UK respond to these new findings and ensure that men in the clinic can benefit without delay.”

Cancer Drugs Fund: winners and losers in pharma, but a long-term fix is needed