Propeller's simple clip on sensor attaches to most asthma and chronic obstructive pulmonary disorder (COPD) inhalers. The sensor records where and when a patient uses their inhaler, sending that data to a smartdevice app which can be viewed by both patient and doctor.

The data recorded can reveal insights into possible triggers for the user's condition, based on recorded locations as well as increase preventative action and medication adherence.

“We’re excited to work with the team at Novartis to connect the Breezhaler device to the Propeller platform," said David Van Sickle, CEO of Propeller Health. "The addition of this major respiratory franchise represents an important next step in our mission to bring valuable digital companions to everyone’s respiratory treatments.”

Propeller's revenues have grown strongly over the past 12 months thanks to numerous big pharma collaborations and deals with over 45 healthcare systems.

Its latest deal comes only a few months after sealing $21.5 million in series C funding to further the platform's development. 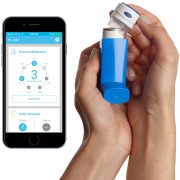 For Novartis, the deal adds to its previous partnerships with technology companies seeking to digitise COPD management. Early last year, the Swiss pharma sealed a deal with one of Propeller's biggest competitors in the market, Qualcomm, to develop another 'smart' version of its Breezhaler solution.

The Novartis-Propeller partnership will initially focus on COPD in Europe.

The invisible burden of RSV on older adults

As we continue to move beyond the COVID-19 pandemic, we’ve seen many aspects of life returning to normal.