Johnson and Johnson has posted stronger than expected Q3 results, helped by it riding out biosimilar challenges and strong growth from Stelara and a host of cancer drugs.

Revenues for the period were up 10.3% compared to the same period last year, rising to $19.7 billion.

These figures were also bolstered by the acquisition of specialist pharma company Actelion, now completed, and growth in its newer pulmonary arterial hypertension treatments Uptravi and Opsumit.

The company has now raised its forecast for full year results, a move which helped lift its share price significantly by 3.5%.

J&J’s share price has outperformed many of its rivals in big pharma this year, and it remains confident about 2018 and beyond. This is despite it having to announce the scrapping of two of pipeline candidates: sirukumab, once a top prospect for rheumatoid arthritis (RA) and talacotuzumab in acute myeloid leukaemia (AML).

Sirukumab was discontinued after a rejection by the FDA last month because of safety concerns and the huge competition in the RA field. Meanwhile talacotuzumab was dropped on the recommendation of the independent safety committee in AML.  The company say it is still evaluating whether or not the drug might be used in other indications.

J&J’s biggest prescription brand Remicade kept its decline to a minimum in the period, despite its biosimilar rivals: sales in the US dipped just 1.3% to 1.2 billion, though total global sales fell 7.6% to $1.647 billion.

The company is however facing a lawsuit from Pfizer, which markets its own biosimilar, alleging that J&J worked with health insurers and payers to block the entry of these cheaper alternatives.

Its brightest performer during the period was Stelara which posted a large 43% increase in US revenues.  This was driven by a growing share in psoriasis, where it is the market leader, plus gains in Crohn’s disease. 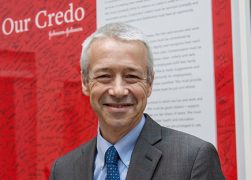 J&J’s pharma division head Joaquin Duato committed earlier this year to achieving a consistent 5% growth in branded drugs sales up to 2020. This will be difficult with increasing downward pressure on US drug prices, but achievable if its new drugs continue on their current trajectory.

Its most recent launch is Tremfya, a next-generation treatment in the crowded psoriasis market, where Novartis’ Cosentyx is the rising star.

Tremfya looks to have got off to a good start, but will have to differentiate itself in order to gain traction.

Janssen’s brightest star is its new multiple myeloma treatment Darzalex, which is predicted to become part of the ‘backbone’ of treatment for the blood cancer.

It is predicted to eventually become the firm’s biggest seller, with peak sales forecast by EP Vantage to reach $9.4 billion.

Its sales reached $317 million in Q3, putting  it on track to become the company’s biggest selling oncology drug within the next few years.

Darzalex has already gained  more than 40% of the US market as a third line treatment, and more than 20% of the second line use.  2018 will see the company submit a new licence for its use in the first line setting, and is also developing a subcutaneous formulation of the drug, two factors set to increase its uptake dramatically.

The company’s other cancer treatments, Zytiga and Imbruvica, also grew strongly in the period. During the quarter, the FDA approved Imbruvica in a new indication, chronic graft-versus-host-disease after failure of one or more lines of systemic therapy.

Sales dropped to $265 million because of increasing discounts for US managed care, and because of new data linking it to raised risk of amputations in patients.  A new black box warning for the drug has had an immediate effect on sales.

Joaquin Duato told analysts on a call “Yes, we are losing share to the other SGLT2 agents since we introduced the box warning in our label. We remain the leader of the category, but we are losing share, particularly in new patients. Certainly, the price has been even a bigger driver in the step decline that you have seen this quarter.”

Duato said ‘very positive data’ of the drug’s effect on lowering MACE (major adverse cardiac events) and the overall risk reduction produced by the drug gave the company hope it can sustain sales.  It also has the CREDENCE trial in patients with diabetic nephropathy, which it hopes will show benefits for renal function in these patients.

Expanded licences for Imbruvica and Darzalex will be among most important drivers moving into 2018, along with a number of new filings.

Once such candidate filed in the quarter was apalutamide – a candidate in non-metastatic castration-resistant prostate cancer which analysts EP Vantage say could earn around $1.4 billion by 2022.

The company is looking to gain approval for the drug in men with prostate cancer without metastases, an earlier treatment option which could change the landscape in the therapy area.

The firm is also planning the filing of esketamine, a treatment for resistant depression in 2018.

Finally, J&J also secured European Commission approval for its new HIV combination Symtuza (darunavir/cobicistat/ emtricitabine/tenofovir alafenamide) during the quarter, and expects the FDA to follow suit in the near future.