A wearable for the remote monitoring of people with Huntington's Disease has received $2.5 million in grant funding from the National Institutes of Health (NIH).

Affecting around 30,000 people in the US, Huntingdon's Disease (HD) causes progressive nerve degeneration in the brain, leading to motor, cognitive and psychiatric symptoms.

This data is combined to quantify disease progression which otherwise would need to be determined via in-clinic assessment.

“HD patients often have to travel long distances to be seen by knowledgeable HD clinicians. Travel is often very difficult both physically and financially for HD patients and their caregivers,” said Dr George Yohrling, senior director of Mission and Scientific Affairs of the Huntington’s Disease Society of America. “The development and eventual integration of wearable biosensors into a HD clinic would allow for remote monitoring of a patient’s motor symptoms and could alleviate this unnecessary burden on the entire HD family.”

HDWear is the product of a two-year pilot project carried out in partnership with the University of Rochester Medical Center and Teva. The resulting paper was published in the Journal of Huntington's Disease last year.

The new funding from the NIH will go toward the further development of HDWear, namely a new study investigating its use as a means of evaluating anti-chorea drug efficacy as well as an early diagnostic device.

“We are grateful for the support provided by NIH for our research and development. We look forward to creating a comprehensive telecare solution for Huntington’s disease to facilitate clinical research and new drug development, and ultimately to improve and revolutionise HD care and care co-ordination,” said Dr Joseph Gwin, vice president of Research and Development at BioSensics.

Outside of its involvement in HDWear, Teva also has a solution in development with Intel. The solution consists of a wearable smartwatch which tracks general functioning and movement which then sends its data to a cloud-based platform equipped with machine learning algorithms. Real-time objective scores of motor symptom severity are then generated. 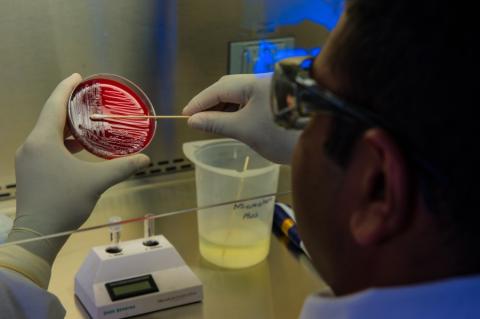 Pollution by the pharmaceutical, healthcare, and agricultural sectors is driving the development of 'superbug' strains of bacteria that have become resistant to every know