2016 has been digital health’s most lucrative year of funding, according to a new end-of-year report from Startup Health.

Already a breakout year for digital health, 2016 has seen a total of $7.9 billion in funding, breaking the previous record of $7.1 billion set in 2014.

The record was achieved thanks to an extra $1.6 billion invested by the end of Q4, joining the previous record-breaking amounts raised during the first half of the year and Q3 ($3.9 billion and $2.4 billion respectively).

The huge total came from 585 deals which, although not the highest total seen in the field (670 in 2013 still stands as the highest deal count) suggests a strong investment interest in the field as a whole. 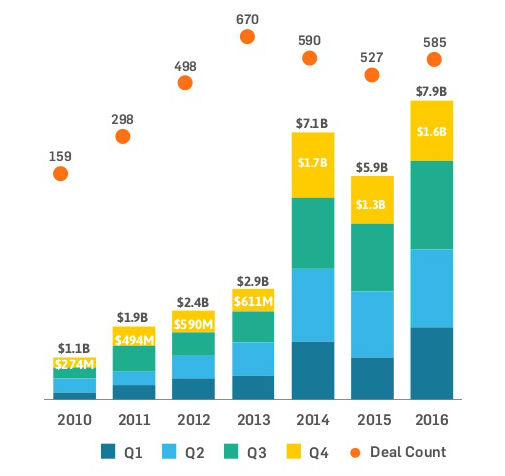 The joint biggest deals of 2016 have come in the form of Ping An Good Doctor’s series A funding round and Sanofi and Verily’s joint diabetes venture Onduo, both of which added $500 million to the total funding pot.

Both deals are considered part of the patient/consumer experience digital health sub-market which itself achieved the most investment in 2016. The sub-market raked in $2.8 billion in funding across 163 deals – more than double the investment and almost quadruple the deal count seen in the second-place wellness sub-market.