Valeant Pharmaceuticals has found itself the target of one of Hillary Clinton’s latest TV adverts.

The advert makes reference to what Clinton terms ‘predatory pricing’ in reference to a price increase by Valeant Pharmaceuticals for a migraine treatment.

The footage in the advert is taken from a town hall meeting in the US on 28 January where an audience member complained about a price hike in her migraine treatment from $18 for 10 shots in the 1980s, to a current price of $14,700.

In the video, Mrs Clinton addresses the story: “The company is called Valeant Pharmaceuticals. I’m going after them. This is predatory pricing and we are going to make sure it is stopped.”

Pharmaceutical pricing policies are a major focus of Mrs Clinton’s campaign to win leadership of the US Democratic Party, as she has shown in the past. Her now famous ‘price gouging’ tweet in September last year, in response to a New York Times piece, highlighted a 5,000%+ price increase in the toxoplasmosis drug Daraprim, leading to online condemnation of then-Turing Pharmaceuticals CEO Martin Shkreli and a drastic drop in biotech stocks. Turing eventually lowered the price of the drug following the backlash. 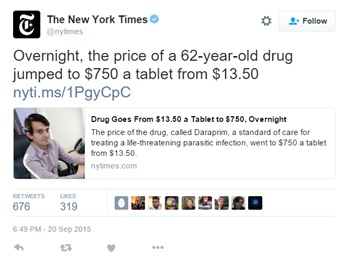 The latest attack on Valeant could not have come at a worse time for the company, following a relatively miserable 2015 fourth quarter. Not only was it subject to a US federal probe into drug pricing, but it was also forced to consider the possibility of subsidising one of its highest-earning units after its unwanted involvement in the drug pricing scandal. Earlier this week, it was revealed that Valeant was under a new investigation by US business regulator the Securities and Exchange Commission (SEC).

Valeant issued a statement in response to criticism surrounding the migraine drug in question explaining that its decision to increase its price was fuelled by generic competition. “Whenever the sales volume of a drug declines, manufacturers must consider pricing adjustments to keep production of the drug viable.

“Patients are able to choose generic versions of the drug, however, at significantly lower prices.”

Results from yesterday’s Super Tuesday polls saw huge wins for Mrs Clinton’s campaign, placing her as the Democratic delegate front runner when she secured seven out of the 11 initial primary polls.