Pharmaceutical company AbbVie is trying to kick-start a move towards more ‘sustainable healthcare’ in Europe – and create some space for its new products too.

There is no doubt that Europe has a big problem. The continent’s population is ageing – one in three will be over 60 by 2050 – and its healthcare systems are already struggling to cope with ever-rising demand, especially in people with long-term conditions.

Chronic disease is now responsible for 86 per cent of all deaths, and affects more than 80 per cent of people over 65, which is estimated to cost 700 billion euros in healthcare spending in Europe every year.

Pharma companies are often seen as part of the problem, not the solution, as high-priced new drugs are another major pressure on health budgets. AbbVie is at the heart of this debate, as it markets the world’s biggest-selling drug – rheumatoid arthritis treatment Humira, while its Viekira Pak is one of a new generation of hepatitis C drugs which offer a cure for the disease, but also a major headache for health systems because of their very high price.

Pharma’s perennial argument is that investing in medicines can keep people healthy and prevent or delay the need for high-cost care in hospitals. But this argument often falls on deaf ears: austerity measures across Europe since 2009 have seen many use the medicines bill to provide a quick way to cut healthcare costs.

US-headquartered pharma company AbbVie is trying to break through this way of thinking – persuading governments that ‘health is wealth’ and that spending on health (including, but not just, medicines) is an investment, not a cost.

AbbVie has tapped into a long-term view, shared by other groups, and set up a European Steering Group (ESG) for Sustainable Healthcare in March 2014.

Alongside these invited experts on the panel is AbbVie’s own head of European operations, Pascale Richetta. Healthcare systems might be forgiven for being sceptical of this pharma-sponsored initiative, as many such grandly-titled groups are little more than thinly-veiled and narrowly-focused lobbying tools.

Just don’t call this a ‘think-tank’ – the company wants to distance itself from well-meaning policy forums which ultimately have little impact.

Richetta says the initiative is characterised by a ‘sense of urgency and staying pragmatic and concrete’ in its aims. The group launched its new white paper Roadmap for Sustainable Healthcare in Brussels last Thursday, outlining recommendations for change around three themes: investing in prevention and early intervention; fostering ’empowered and responsible’ citizens; and reorganising care delivery.

Of the 30 projects, one of the most impressive so far is an early intervention clinic at a hospital in Spain for people with musculoskeletal disorders. The team at Hospital Clinico San Carlos in Madrid has achieved dramatic results by creating an integrated care package combining early diagnosis, referral, and intervention programmes.

A total of 13,000 patients were assessed and offered early treatment after five days of sickness absence – resulting in temporary work absence falling 39 per cent and permanent work disability dropping 50 per cent. Study leader Dr Juan Jover estimates that the equivalent of over 46,000 Spanish workers would be available for work each day rather than taking sick leave.

Most eye-catching are the savings: for every €1 investment, the pilot suggests that a total saving of €11 in health and social welfare can be made.

Dr Jover says the huge impact of the study has caught the attention of the government: “They liked the programme because we saved them a lot of money,” and the programme will now be rolled out across 10 of Spain’s 17 autonomous regions.

The company is hoping the success of these pilots can help overcome the huge barriers to change in Europe’s health services, which have proven resistant to change. Reforms of health services are frequently opposed by the public, healthcare professionals, and top-down political fixes often do more harm than good.

AbbVie says this and all the other projects across Europe will provide proofs of concepts which help European governments and policymakers “progressively transform” their healthcare systems.

Of course, by finding savings elsewhere in the system, AbbVie hopes these reforms will also create room for costly new medicines, and just maybe foster belief in the idea of ‘upfront investment’ in healthcare. 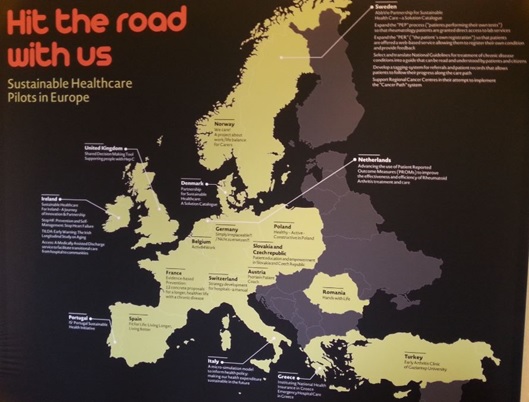 Such proactive leadership from AbbVie is part of a long-term approach, aimed at making it a credible voice in European health policy.

It won’t directly help AbbVie with its own sustainability issues, however; its flagship drug Humira will face competition from biosimilar rivals in the US from 2016 and Europe in 2018, which could seriously dent its earnings.

AbbVie’s response to these pressures has been to go on the acquisition trail. After backing out of a $31 billion takeover of Shire in October, AbbVie swooped for Pharmacyclics and its cancer blockbuster in the making, Imbruvica, paying $21 billon for the firm last month.

The company’s next big challenge is to gain favourable reimbursement for its two-pill hepatitis C regimen, Viekirax (ombitasvir/paritaprevir/ritonavir) and Exviera (dasabuvir), in Europe. The treatment (known as Viekira Pak in the US) gained European approval in January, and will go head-to-head with Gilead’s blockbuster treatments Sovaldi and Harvoni.

Analysts believe AbbVie will struggle to match the record-breaking success of Gilead’s products, and because Viekirax and Exviera is a four-pills-a-day regimen, this is likely to make it less popular with patients. However AbbVie scored a victory in the US last year by winning a major contract with pharmacy benefit manager Express Scripts through undercutting its rival on price.

Asked about reimbursement discussions in Europe, Pascale Richetta said: “It is work in progress – we are far from being available in these countries as I speak. But our experience of working with these governments has been extremely positive – [we are] really trying to find a solution together.”

Richetta says some discussions are around phased introduction, making the drug available to those with the most severe hepatitis C infections first, and then expanding to less severe patients. She says this stepwise approach acknowledges limitations in the healthcare budget, and in the capacity of the health systems to cope with this revolution in hepatitis treatment.

AbbVie is likely to undercut Gilead on its prices in Europe too, but these won’t emerge for a few months yet.

The firm is also offering its ‘beyond the pill’ services to help patients, called AbbVie Care, which is already established in a number of therapy areas including Parkinson’s, rheumatology and gastroenterology.

This pragmatism around prices, ‘after-sales care’ and its laudable long-term vision around sustainable healthcare will help AbbVie differentiate itself from its competition. This joined-up thinking is clearly a growing trend for the whole sector, but pharma still has a long way to go to convince all of Europe’s health systems that it is part of the solution, and not part of the problem.