As 2013 draws to a close, Paul Tunnah muses on the fact that there is increasing recognition that effective healthcare solutions for patients require broader collaboration across all stakeholders, as initiatives like the G8 Dementia Summit demonstrate.

As we near the Christmas holiday period and thoughts turn towards getting together with family and friends, it is good to see some really positive action in the world of healthcare collaboration too.

The recent G8 dementia summit brought together all kinds of stakeholders with a common interest in tackling the growing epidemic that is Alzheimer’s Disease, including charities, research organisations, the pharmaceutical industry and leading governmental spokespeople, including UK Prime Minister David Cameron.

I was impressed by the event, not just because of the bold aims and inclusive nature of the discussion, but also because it presented itself in such a media savvy way, with extensive live coverage through text, video and social media, to allow those who could not physically be there to follow the debate. This is further endorsement that tricky problems like dementia can only be solved by physically bringing together the smartest and most influential stakeholders, plus allowing the world outside to observe and add additional commentary.

The G8 dementia summit also came away with some clear objectives, as what happens after such events is arguably more important than the event itself, which included:

• greater spending on dementia research, with the UK pledging to increase its annual investment in this space to £132m by 2025

• an aligned ambition to find a cure, or disease-modifying therapy, for dementia by 2025

While it was good to see the pharmaceutical industry involved in this initiative, it also serves as a template for the type of cross-stakeholder engagement that pharma must more proactively drive itself, in my opinion. It is great to see that this is starting to happen too, in small steps, with initiatives such as tweetchats that facilitate broader open input from pharma’s customers, key partners and patients, becoming more prevalent.

It was actually a neat coincidence that the most recent tweetchat I had the pleasure of moderating was held on the same day as the G8 dementia summit and discussed some clearly aligned issues around earlier diagnosis of neurological disorders. Led by GE Healthcare, the #1year2long tweetchat also on the 11th December did not quite make as much noise as the main event that day, but judging by the graphical representation of #G8dementia tweets compared to #1year2long below, we held our own! 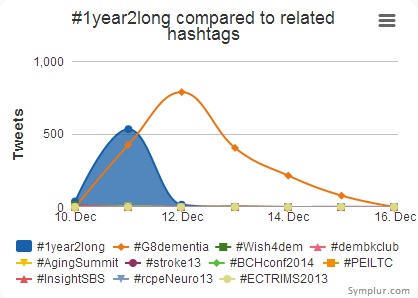 But joking aside, these are not competitive activities and are, in fact, highly aligned. The #1year2long tweetchat focussed on the underlying causes of late diagnosis for neurological disorders (including dementia), what the current implications of this are for patients and how earlier diagnosis can best be implemented. It was great to see several notable physicians and patient advocacy groups dipping in during the hour, which included almost 500 tweets from over 50 participants.

Looking ahead to next year, I am determined to help drive more of this kind of collaborative engagement. Like the fantastic G8 Dementia Summit, the best solutions for patients in all disease areas can only be found by bringing together the smartest minds and those with the influence to drive change.

“In 2014, the pharmaceutical industry must keep driving to have a seat at the table of such collaborative discussion”

It is a good reminder that the power of the digital revolution in healthcare is not actually about the media itself or the specific channels. It is not ultimately about articles, white papers, videos or Twitter, Facebook and LinkedIn. These are all merely tools to help connect people with ideas and potential solutions together, not an endpoint in themselves, and must be employed as such to be effective.

In 2014, the pharmaceutical industry must keep driving to have a seat at the table of such collaborative discussion, or even set the table for others to join. So as you relax over Christmas and ponder on how good it is to connect with those you have not seen for a while, think about making a New Year’s resolution to do more connecting in your everyday work with the pivotal people across healthcare that can help drive real change for patients.

I believe that initiatives such as the G8 Dementia Summit signal the beginnings of a new era of collaborative healthcare and it’s good to see our motto of ‘bringing healthcare together’ being also represented in the great work of others. My New Year’s resolution will be to support such initiatives however I can in 2014.

Until next month, have a fantastic Christmas holiday, a happy New Year and, as always, stay well.

Paul Tunnah is CEO & Founder of pharmaphorum media, which provides digital content marketing and communications solutions for the pharma sector and also manages the industry leading channel www.pharmaphorum.com, a digital podium for communicating thought leadership and innovation within pharma. For queries he can be reached through the site contact form or on Twitter @pharmaphorum.

What can pharma learn from the #G8dementia Summit?