Take a breath – this could be the definitive cancer screening tool

Current screening methods for cancer are divisive at best. So isn’t it time we began developing new ways to detect the disease in its earliest stages? One company that believes it has the solution is Owlstone Medical, with a potential screening tool that analyses breath.

Cancer is a complex beast and remains one of the biggest challenges for healthcare today. The vast amount of genetic coding and molecules that play a part can make diagnosing the disease a true enigma.

To date, diagnosis still relies on imaging techniques, preceded by invasive procedures like a blood test or biopsy performed to justify the use of a CT or PET scan. The process can take from a few hours to days or weeks to get a definitive diagnosis.

To speed up the process, screening tools aim to catch cancer in its earliest stages, meaning the patient requires less treatment and spends less time in the healthcare machine.

Unfortunately, screening tools aren’t perfect. Prostate specific antigen (PSA) testing for prostate cancer relies on detecting the presence of a molecule that can be elevated by a simple infection. Anomalies found during a mammography do not distinguish between an aggressive breast cancer or a benign lump. A faecal occult blood test (FOBT) could indicate a haemorrhoid rather than a tumour in the bowel.

Despite the advanced technologies used in each of these examples, their false positive and false negative rates raise issues of trust.

However, the answer could lie in a much simpler solution – one that doesn’t need a specific modality to identify a specific cancer, instead relying on something every human has: breath.

A new type of biopsy

Originally developed to detect harmful chemicals in the air, Breath Biopsy can detect the presence of lung and colorectal cancer from breath samples by measuring levels of molecules called volatile organic compounds (VOCs).

These chemicals occur naturally in the body and diffuse out of the blood into the airways before being exhaled. A growing body of evidence suggests that the presence of cancer can influence the levels of VOCs in the breath, making them a potential indicator of disease.

“VOC biomarkers represent a new way to think about how cancer and, potentially, many other diseases are found in the body,” says Billy Boyle, co-founder and CEO of Owlstone Medical. “More and more research is suggesting they are directly influenced by cancer, with some VOCs even being cancer type-specific.”

Breath Biopsy’s underlying technology is called field asymmetric ion mobility spectrometry (FAIMS). The process involves separating gas ions in a breath sample based on their electric charge, which, in this case, occurs through a silicon microchip.

But what makes this method more promising than existing technology?

The first part of the answer lies in the volume of each sample taken. A traditional blood sample is a ‘snapshot’ insight into the molecules present in a specific sample of blood – a minuscule volume in comparison to the amount flowing through the whole body. Unlike its liquid counterpart, the amount of sample available to Breath Biopsy is effectively unlimited. Breath Biopsy collects VOC biomarkers from a large volume of breath sampled over approximately 10 minutes.

As a result, the second advantage of Breath Biopsy arises: an in-depth examination of disease biomarkers originating from the whole body. Due to efficient exchange of chemicals between the circulating blood and the lungs, each exhaled breath contains a rich spectrum of VOCs derived from the blood. It takes a blood cell approximately 1 minute to circulate around the entire body. By continuously sampling breath over a few minutes, VOC biomarkers originating from throughout the body can be captured in breath – including VOCs present at very low levels.

Fourthly, its non-invasive nature means more people are likely to give a breath sample than, say, an FOBT – which requires handling faeces – or a colonoscopy – which requires pre-test preparation and an undesirable experience.

“For us, it is about developing the opposite situation to the one that exists today,” states Boyle. “We have a solution that is easy-to-use, non-invasive and highly sensitive – something that can lead to greater faith in healthcare, a higher compliance rate and, ultimately, more disease being treated earlier.”

Owlstone Medical has received financial backing through NHS England’s Small Business Research Initiative (SBRI) for Healthcare. But, as Boyle points out, that doesn’t mean it’s guaranteed a role in the NHS: “We haven’t received any assurances that this is going to be adopted by the NHS. Ultimately it is down to us to prove our technology’s benefit to patients.”

Pilot studies have proved a high degree of sensitivity and selectivity, while the FAIMS microchip itself is both 1,000-times smaller and 100-times cheaper than existing chip technologies. 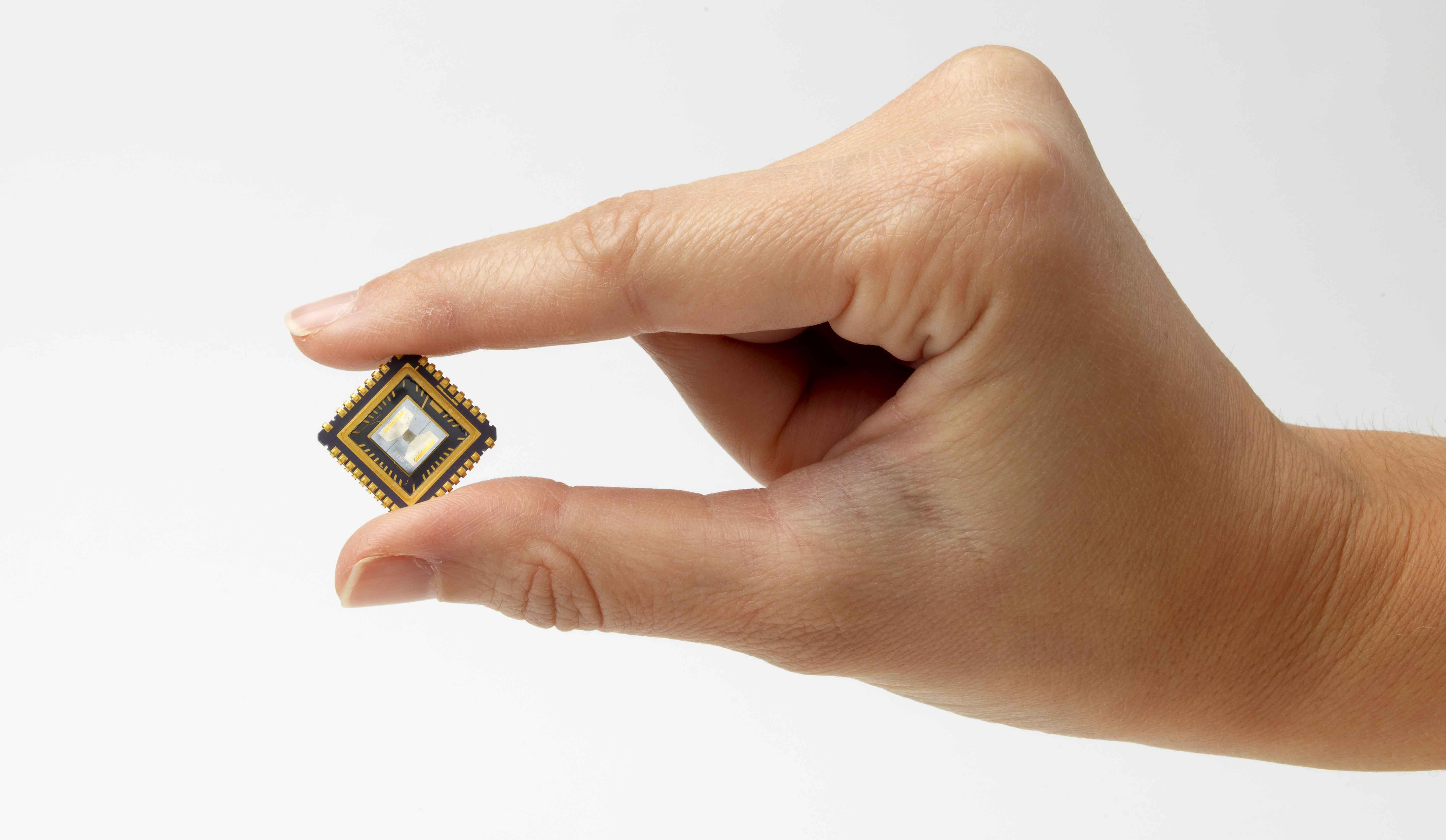 The FAIMS microchip is far smaller and far cheaper than current-day alternatives.

Of course, it still needs larger-scale data to back it up, which the company is gathering.

It has trials ongoing in both lung and bowel cancer for its device as a potential screening tool, as well as in asthma as a patient stratification test. It has also partnered with the Mayo Clinic in the US to test its ATLAS Headspace Sampler and Lonestar VOC Analyzer using FAIMS technology to analyse VOCs in the air surrounding liquid or solid samples for pre-screening colon cancer, detecting which patients have adequately prepared for colonoscopy and which are not.

The goal is to help rid healthcare systems of their numerous ‘inefficiencies’ – millions spent in repeat testing, treatment with high-cost, late-stage therapies and extra administration.

“Our technology is intended to complement the current system and ensure patients are getting the most out of their healthcare,” says Boyle. “Right now, so much money is being spent on righting wrongs incurred by inefficient methods that could otherwise be invested into the system to make it better as a whole.”

Addressing these issues will be the key to its negotiations with the NHS.

Though the UK health system is a long-term goal for Owlstone Medical, according to Boyle, it’s still some way off. LuCID, it’s trial investigating Breath Biopsy as a lung cancer screening tool, is likely to release data towards the end of this year.

Whether or not data from the trials proves the worth of Breath Biopsy, the company clearly has faith in its product. Its core objective is to save 100,000 lives and $1.5 billion in healthcare costs.

Owlstone is a company to keep an eye on. In a relatively short period of time, it has moved from intriguing spinout to potentially revolutionising cancer screening.

Even if it does fall short of its ambitious goals, as Boyle summarises, “is it wrong to have a go?”

Owlstone Medical will be featured in the upcoming edition of Deep Dive: Oncology. Click here to register to receive your copy.