Earlier this year, Boehringer Ingelheim and Lilly announced an expansion to the clinical trial programme for Jardiance (empagliflozin) in chronic heart failure. The SGLT2 inhibitor drug, which is used to treat patients with type 2 diabetes, was previously found to have favourable results in heart failure among diabetes patients, sparking excitement about possible new indications for the class outside of diabetes.

AstraZeneca had already been quick to consider the class-wide impact of the cardiovascular benefits of SGLT2 inhibitors, launching a study of type 2 diabetes patients on various SGLT2 inhibitors including its own product, Farxiga (dapagliflozin). In March this year, the company announced results supporting the association of CV benefits with Farxiga.

But Boehringer’s trial goes beyond improved CV outcomes for diabetes patients to consider its product’s role for heart failure patients who do not have diabetes. Heart failure is estimated to affect 26 million people worldwide, and the indication could open up new opportunities for the product’s use among a new patient group.

All of this means manufacturers of SGLT2 inhibitors are faced with a potential new group of customers – cardiologists treating heart failure – who may not yet be familiar with their products.

My team took a look at the collective intelligence of healthcare professionals (HCPs) in the United States to discover how they are anticipating the use of SGLT2 inhibitors in heart failure. Using CREATION Pinpoint, the HCP insights platform, we studied the online conversations of HCPs in the US from January through to July 2018, talking about heart failure and SGLT2 inhibitors.

Our analysis of US HCP online conversations about SGLT2 inhibitors in relation to heart failure shows that a wide range of HCPs are sharing the latest data and are excited by the positive results. Cardiologists, however, appear to be slow to celebrate the role of the class in treating heart failure. 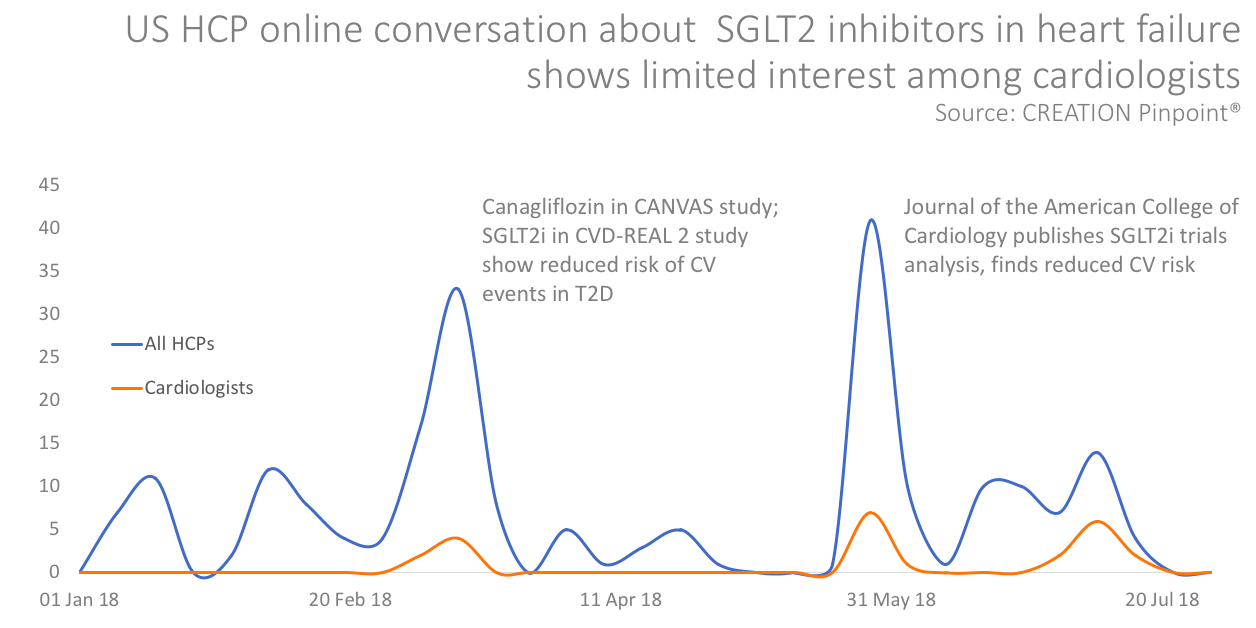 During the period of analysis, cardiologists only discussed SGLT2 inhibitors in relation to heart failure immediately after news of study results, when there was a significant spike in conversation across all role types.

When study data was discussed, it seems that some of the cardiologists’ interest was sparked by HCP peers in other role types. After initial news about study data, cardiologists’ posts about SGLT2 inhibitors in heart failure tailed off rapidly. 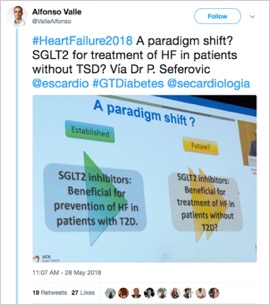 That is not to say that there were no cardiologists getting excited about the new data though. US physicians reacted when Alfonso Valle, a cardiologist in Spain, shared a slide presenting the use of SGLT2 inhibitors for the treatment of heart failure patients without type 2 diabetes, calling it a “paradigm shift”. As well as engaging US physicians, his tweet was widely shared by other cardiologists in Spain.

Cardiologists are positive but cautious

Overall, those cardiologists who mentioned SGLT2 inhibitors for heart failure were positive, but there was notable caution among their comments too. 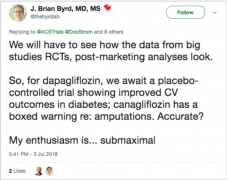 “My enthusiasm is… submaximal”, tweeted US cardiologist J. Brian Byrd, stating that he feels more data is needed.

Others were concerned that there was uncertainty about the mechanism.

Cost was also a concern raised by cautious cardiologists like Hashim Khan. “All well and good but what about cost?” he tweeted.

Brian Bird was also cautious about adverse effects, citing the issue of limb amputation and sharing concerns that this may be a class effect.

A call for cardiologists to step up

Cardiologist Hani Jneid joined an international discussion about whether cardiologists should become diabetologists too, concluding that they should at least be familiar with newer agents that not only control diabetes but also protect against cardiovascular events.

What next for SGLT2 in cardiology?

From this brief research, we see that:

For cardiologists to take a lead, it appears that reassurance is needed and perhaps collaboration between roles, with cardiologists learning from diabetologists who are more experienced in the use of the class.

Data to inform this article was taken from online HCP conversations posted from January through to July 2018 collected using CREATION Pinpoint.

Daniel Ghinn is Founder and CEO at CREATION where he leads the team developing insights-led strategy for healthcare clients using unique insights on the online conversations of healthcare professionals. Daniel tweets at @creationdaniel.