Daniel Ghinn provides an update on pharma’s use of Pinterest since he last wrote about it two years ago. He updates us on the pharma companies who have adopted this social channel and compares their use of it.

(Continued from “Pharma Gets Social: Eight years of Twitter for Pharma – from birth to adolescence“)

Bayer has long been a pioneer of social media among its pharmaceutical company peers, as exemplified by its early adoption of Chinese social media platform Sina Weibo. The company’s products span a diverse range of sectors outside of pharmaceuticals, and today its Pinterest profile focuses largely on the broader, non-pharmaceutical aspects of its business.

Meanwhile, other pharmaceutical companies have now adopted Pinterest and some of them are developing something of a following online. Among these are Boehringer Ingelheim, Novo Nordisk, and Genentech, each of which is using Pinterest to support their pharmaceutical business. So let’s take a look at how these three compare.

A very simple indicator of social media engagement, and one of the most widely quoted, is follower count. Looking at these three companies on Pinterest reveals just how slowly things are moving for pharma: each has less than 600 Pinterest followers. Boehringer has the most followers of the three, 593 as I write this, but that’s less than 2% of its more than 32,000 Twitter followers and well below 1% of its 92,000 Facebook fans. 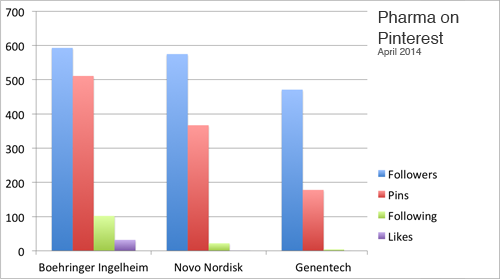 Figure 1: Of these three leading pharma on Pinterest, Boehringer appears to be the most engaged. But that’s not the whole story…

Pinterest’s pins are individual images which may be linked to other online resources, or to a higher-resolution version of the original image, such as the ‘haemophilia facts and figures’ infographic poster recently ‘Pinned’ by Novo Nordisk, which has been ‘liked’ twice so far.

Of course, quantity of Pins is not necessarily an indicator of channel success, but this comparison provides a simple measure of each company’s experience and contribution level on the platform.

The act of following others on Pinterest suggests an intention to listen, learn from and perhaps engage with them via the channel, so a quick look at who each company follows might tell us something about their approach to engagement.

Following 102 other Pinterest users, Boehringer ranks at the top of the three companies for number of others followed. Novo Nordisk only follows 22 others, and Genentech just 4. While Genentech follows Novo Nordisk, Bayer, GE and Drake University, Novo Nordisk follows a range of organizations and individuals in healthcare, and diabetes in particular. Boehringer follows the most diverse range of people and organizations, spanning healthcare and therapy organizations, healthcare professionals, patient groups, agencies and media publications. Its list of followed profiles reads like a kind of “who to follow on Pinterest” for healthcare.

Users of Pinterest may respond to images they see by ‘re-pinning’ the image, by commenting on the image, or by liking it. The three pharmaceutical companies rarely ‘like’ Pins from others, with Boehringer the most active having liked 32 other pins.

“…perhaps Pinterest offers a current and future connection with individuals who might not connect with the company via other channels.”

Genentech’s ‘Data & Info‘ board is a series of infographic posters and fact sheets shared from the company’s other online sources including its corporate site and other therapy area sites operated by the company such as Flu Facts and Diabetes Eye Check. The board includes popular resources such as a Rheumatoid Arthritis poster that has been re-pinned by over 260 other users including patient organizations and individuals. This means that despite Genentech having the lowest number of direct followers on Pinterest, its content through the channel is reaching far and wide. 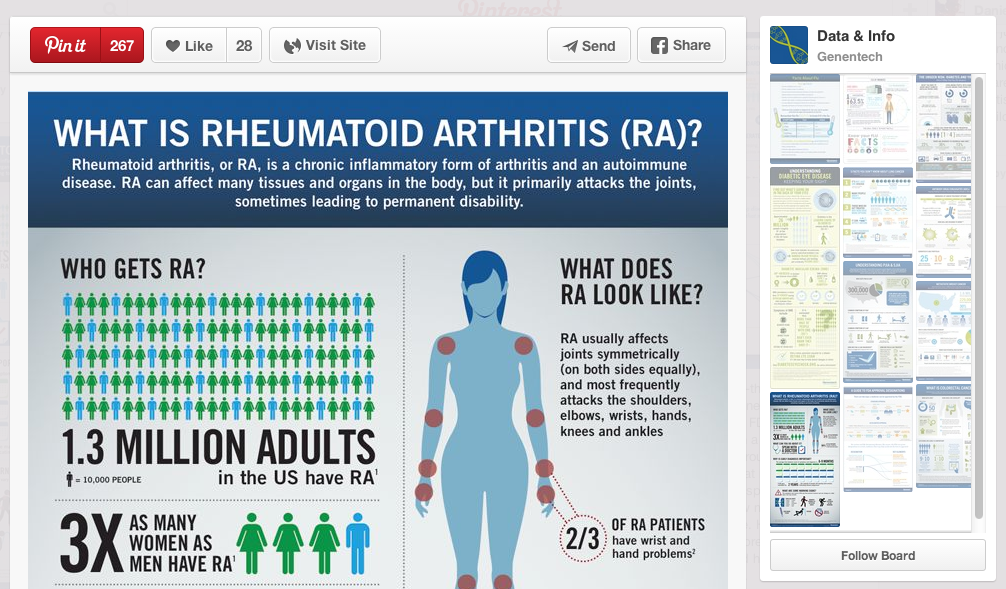 As well as Pinning content produced by the company itself, Boehringer re-Pins others’ content, such as Pink Initiative’s Breast Cancer by the Numbers, posted from Health Blog. 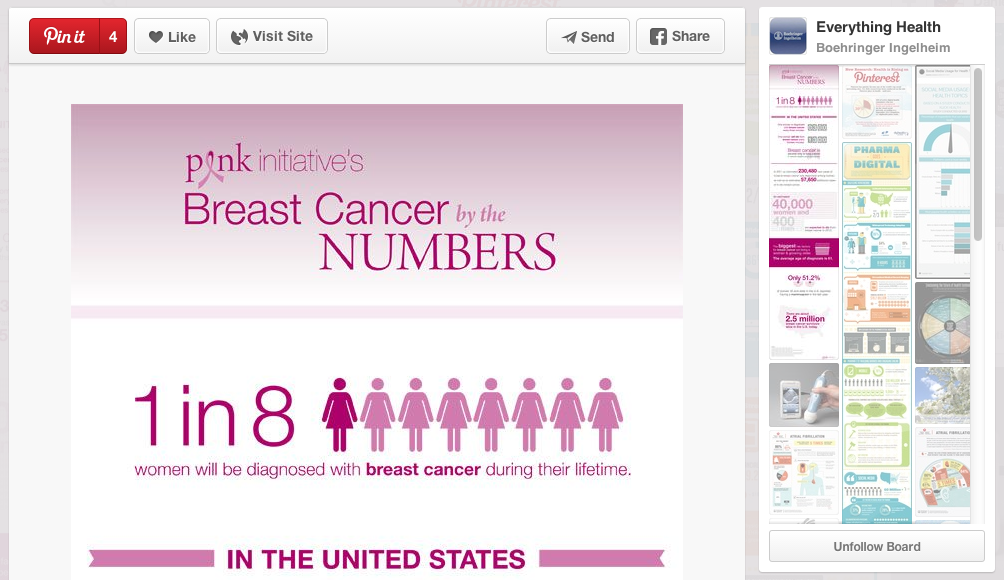 Figure 3: Boehringer includes re-Pins from others in its Pinterest Boards. Source: Pinterest.com.

Novo Nordisk uses re-Pins to show its support for other organizations such as the International Diabetes Federation. In one Pin, the company shares an infographic poster from IDF and endorses it by adding a comment, “Remember to check out the sixth edition of the Diabetes Atlas from IDF…” 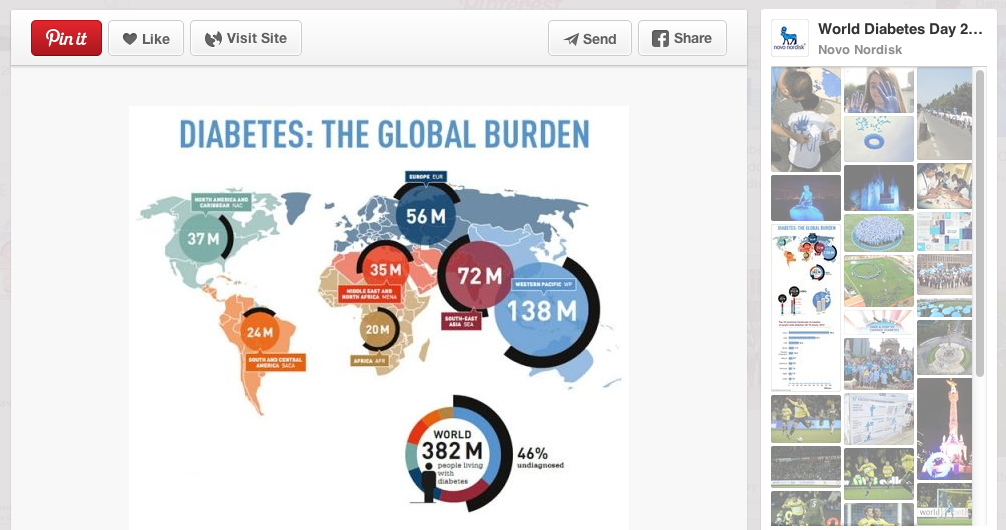 Are these companies leading the way for others in pharma to follow? Certainly their activity on Pinterest should provide some food for thought and I recommend exploring their Pinterest channels for more inspiration. With its relatively low volume of engagement around pharma content, Pinterest arguably offers a lower-risk and still largely un-tapped environment for pharma to explore new ideas in social media.

The next article in this series will be published in May.

Daniel Ghinn is CEO of Creation Healthcare, the research-based engagement strategy consultancy to pharma and the healthcare industry. He tweets at @Engagementstrat and can also be found on Pinterest from time to time.

Have your say: Which pharma companies are leading the way on Pinterest?