External analysts are continually proposing new strategic directions for pharma, so pharmaphorum caught up with a David-Alexandre Gros, from Sanofi’s leadership team, to hear his vision from the inside on the future direction for the company.

David-Alexandre Gros, MD is a relative newcomer to big pharma, having joined Sanofi as Chief Strategy Officer in September 2011. However, after only 12 months in the role he is already helping to shape the company’s future and is a clear advocate for further evolving the company’s activities to focus more broadly on integrating care.

Speaking at the FT Global Pharmaceutical and Biotechnology conference in early December as part of a panel discussion on new operating models, he was supportive about the need for greater data transparency, diversification and greater collaboration. pharmaphorum caught up with Dr. Gros to hear his views on how Sanofi is adapting to the changing environment.

Broadening the focus beyond drugs

Big pharma is diversifying in all kinds of directions currently, spurred on by a desire to reduce shareholder risk associated with pure play prescription medicines. But Gros sees the shift as more fundamental than this, something that is critical to the role of big pharma in managing wellness and already an integral part of the way Sanofi conducts business.

“…we have evolved to being a diabetes company, not just a Lantus company.”

“Sanofi is focusing on platforms rather than on individual products. In 2008, we had about two-thirds of our sales primarily from our blockbusters while today more than 70% of our revenues are from growth platforms. For example, we have evolved to being a diabetes company, not just a Lantus company. In other words, we are no longer focused on just insulin as a product, we are now focused on the diabetic patient and assisting that patient in meeting their needs to care for their disease.”

He goes on to elaborate on some of the specific activities that support this statement, including:

• The Alcance program in Brazil, which provides patients with access to both diabetes education and medication.

• T1Dstars, a website dedicated to adolescents with Type 1 Diabetes.

• The My Diabetes Story Community in the United Arab Emirates, which he describes as “an online diabetes patient community lead by diabetics for diabetics.”

Further evidence of this broader focus on the disease area rather than the drug is witnessed in Sanofi’s recent World Diabetes Day announcement that it is collaborating on the TEENs registry study, which will observe 7,000 people with type 1 diabetes across 20 countries to deliver better recommendations for disease management and improved patient outcomes.

“The approach is about going beyond drugs including offering services that support the broader disease area,” clarifies Gros. Does this mean that the company could eventually move away from drugs altogether in managing certain disease areas? The answer from Gros is a clear no, as he contends that “Sanofi has a strong heritage in innovative drug development. Pharmaceuticals are at the core of what we do and as such, it is critical to maintain this.” A clear case of not throwing the baby out with the bath water in the face of changing to meet market needs. 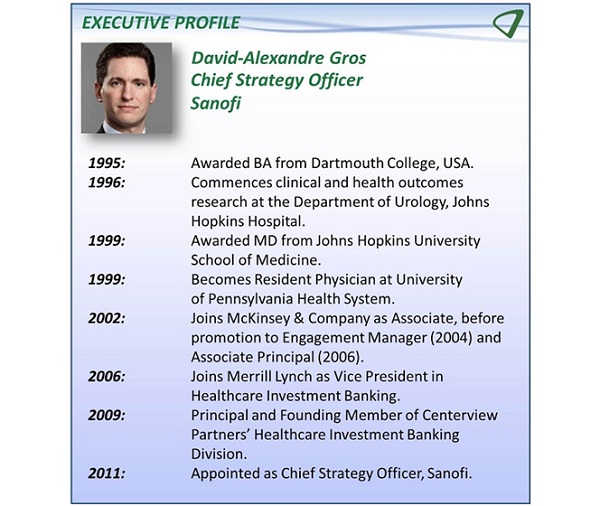 The panel session in which Gros participated certainly became most animated when the issue of data transparency was raised. He is clearly an advocate of navigating a route to greater transparency, but is pragmatic about some of the challenges that may be faced along the way.

“We recognize the benefits of transparency to support an informed society with informed patients but disclosure must of course be balanced with legally required protections such as of protected personal data and commercially confidential information,” Gros explains, before going on to state that “the goal of transparency for itself should be weighed against potential confusion to patients as a result of inconsistent conclusions. Conclusions may generate misuse or inappropriate termination of treatment resulting in potential harm to the patient.”

The points raised are indeed valid. Despite the current media spotlight on big pharma with regards to disclosure of clinical trial data, Gros recognises that to rush in with immediate change could create more problems than it solves and a clear direction is required that meets the needs of all stakeholders in the discussion. Gros is clearly passionate about any response from pharma being on doing the right thing for patients and other healthcare stakeholders, rather than simply a PR exercise.

“Pharmaceutical companies should be proactive and do the right thing by patients.”

“Pharmaceutical companies should be proactive and do the right thing by patients. There are clear public health benefits associated with making clinical trial information more widely available in a responsible manner. Moreover, the industry already currently registers extensive information on clinical trials and publishes information on results both positive or negative through numerous channels.”

There have even been calls from certain quarters for pharma to step away from the clinical data and independent third parties to be involved in the analysis and recommendations. For Dr. Gros, pharma companies should play a key role here.

“Multiple stakeholders are involved in data analysis and regulatory agencies are ultimately given the responsibility for evaluating all clinical and scientific information. Pharmaceutical companies must maintain an active role in data analysis – we know our own data better than anyone.”

So what does the right solution look like here? It seems no-one has a clear view at this point, but Gros is certain it will only come from discussion involving all the key parties, something Sanofi is open to. “The needs and implications of releasing data on innovation, patient protection, and public health needs to be further discussed among regulators, patients, academia, and industry”, he confirms.

It is clear from the discussion that Gros’ views are shaped by his prior experience outside of pharma, as both a physician and as strategic consultant, which provides him with a somewhat unique perspective on exactly what healthcare providers and patients need from pharma and how the industry can adapt to deliver against those needs.

“…it is critical for Sanofi to clearly state what it is going to do and deliver against that promise.”

In his view, the success of collaborative working depends on there being trust between all parties and this comes from doing some very basic things right. “Healthcare companies have tremendous responsibility and living up to their promises is what defines the corporate brand,” recognises Gros, before simply stating that the starting point for building trust is simple in that “it is critical for Sanofi to clearly state what it is going to do and deliver against that promise.”

The overarching view from speaking with Gros is that Sanofi has recognised the value of external experience in shaping its boardroom and the future of the company. The industry is not going to change its business model dramatically overnight, but nor is it at risk of extinction. Instead, with the right direction and leadership, there is emerging evidence that we will continue to see a controlled evolution into broader disease-focussed service provision to better meet the needs of healthcare providers and patients in the 21st century healthcare system.

This interview was conducted by Paul Tunnah during the FT Global Pharmaceutical and Biotechnology Conference 2012 and pharmaphorum wishes to acknowledge the support provided by the Financial Times.

David-Alexandre Gros is Chief Strategy Officer, in addition to being a Member of the Executive Committee and the Global Leadership team at Sanofi.

David-Alexandre Gros holds a B.A. from Dartmouth College (1995), an M.D. from Johns Hopkins University School of Medicine (1999) and an M.B.A. from Harvard Business School (2002). He worked in clinical and health outcomes research at the Department of Urology of the Johns Hopkins Hospital from 1996 to 1999, and then as a Resident Physician at the University of Pennsylvania Health System from 1999 to 2000.

In 2002, David-Alexandre Gros joined McKinsey &amp, Company’s Pharmaceuticals &amp, Medical Products practice as an Associate, was promoted to Engagement Manager in 2004, and to Associate Principal in 2006. In late 2006, he joined Merrill Lynch as a Vice President in Healthcare Investment Banking focusing on strategy, mergers &amp, acquisitions and corporate finance until joining Centerview Partners in mid-2009 as a Principal and founding member of the Healthcare Investment Banking Division.

He was appointed to his present position in September 2011.

What experience does the big pharma boardroom need?