European M&A in the Lifesciences sector: 2013 and beyond

Sandra Rafferty of CMS London explores European M&A activity in the Lifesciences sector in 2013 and looks ahead to what 2014 might hold.

Although general M&A activity levels in Europe dropped in 2013 compared to 2012, the Lifesciences sector proved to be rather resilient; there being a moderate uplift in activity of 2%, bringing the number of European deals in the sector in 2013 to 429.

M&A activity across Europe in 2013 is shown in the chart below. 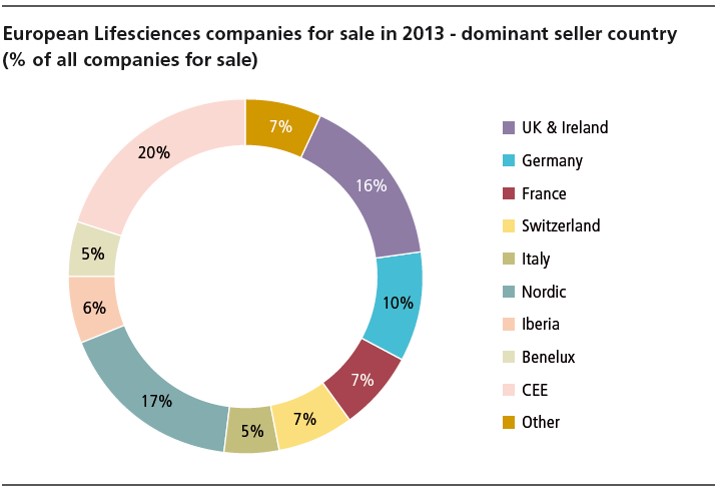 Interestingly, 2013 proved to be the year of the mid-market deal with 412 of the 429 deals being < £500 million. Activity was highest in the pharma sub-sector, although deal activity in the biotech sub-sector significantly increased from 2012 by 85%. North American purchasers remained interested in Europe, in particular Actavis, Valeant and Perrigo, and Europe will continue to attract such interest. Reasons for the lack of high-end M&A included significant increases in the valuations of Lifesciences companies (both public and private) making public acquisitions more expensive, and enabling IPOs to represent a more realistic and attractive alternative to selling in an increased number of instances. In addition, large pharmaceutical companies are concentrating on restructuring, including investment.

Divestment of non-core assets (most likely legacy divisions and / or assets in lower growth sub-sectors and regions) is likely to be a key driver for European M&A activity in 2014. We have already seen a trend for such disposals which started in the US, with Pfizer being a principal proponent. This is indicative of a move by pharmaceutical companies to become smaller and more specialised, with an increased emphasis on core (higher growth) assets.

Companies in the Lifesciences sector (particularly big pharma) are increasingly faced with shrinking product pipelines, patent cliffs and rising costs, in particular growth gaps (being the additional revenue needed to keep pace with growth in the markets generally). Such factors will continue to drive pharmaceutical companies to seek bolt-on acquisitions to grow their revenues. AstraZeneca was particularly active in this approach in 2013, making a number of acquisitions to bolster its pipeline and revenues.

Whilst macro-economic stability continues, the level of M&A activity in the European Lifesciences sector in 2014 is expected to remain solid. In fact, developed (and therefore “safer”) markets are increasingly back in vogue (especially amongst North American buyers), assisted by the slowdown of growth in developing countries. This means that, if anything, Lifesciences M&A activity is likely to increase in Europe when compared to 2013.

UK & Ireland, Germany, Switzerland and certain Nordic countries are expected to have the highest levels of M&A activity across Europe.

The general aversion to high-end deals (and more particularly the greater risks that they tend to entail) will continue. However, this is not to say that there won’t be some Lifesciences companies that go against the prevailing strategy in the sector and are minded to grow and diversify through “mega deals” – Novartis in particular could be worth watching in this regard. Otherwise mid-market deals will instead continue to dominate, particularly because they tend to be easier to finance and integrate in a climate that will remain challenging for many Lifesciences companies.

It is expected that biotech and specialty pharma will continue to become more competitive as potential acquirers. Large biotech, in particular, are regarded as more active on structured deals and as being more aware of the opportunities a transaction may offer. As a consequence, large biotech are more likely to pay more for technology and to move more quickly to close a deal than big pharma may.

“…large biotech are more likely to pay more for technology and to move more quickly to close a deal than big pharma may.”

There still remains some scepticism as to whether European IPOs will have a bull market in 2014, despite the large increase of activity in this sector in the US. The IPO market is buoyant and private companies may feel they can get a better value via an IPO than by a sale. Even big pharma have described some company valuations on IPO as “astounding”. But if there is an IPO window, whether in Europe or the US (where it is considered that US investors are more willing to back Lifesciences companies than their European counterparts) there remains the risk it will close and undoubtedly big pharma will seek to make acquisitions, although they need to be able to compete against the big biotech who will pay more and are nimble to close a deal.

Big pharma are also likely to turn to M&A in other sub-sectors such as devices, diagnostics, speciality pharma or consumer products. In particular, European medical device companies are likely to be of interest since the obtaining of a CE mark of approval is easier and cheaper than the US equivalent.

Overall M&A activity in the European Lifesciences sector for 2014 is expected to be good. The “mega-merger” may be less likely but Europe is attracting US buyers (and even Japanese pharmaceutical companies are expressing more of an interest). Divestments will generate more cash for large pharma who are keen to build their product pipelines and revenues, and some will venture into newer sub-sectors, such as devices and specialty pharma. However, private European Lifesciences companies, who may be susceptible to acquisition, may seek to IPO and achieve better value, particularly in the US where valuations are higher.

Sandra Rafferty is Head of the UK Lifesciences group at CMS and a partner in the Corporate Practice. She has extensive experience in advising on a broad range of matters including mergers & acquisitions (particularly cross-border transactions), post-merger integration, corporate finance (including public company takeovers), private equity, joint ventures, outsourcing, corporate restructurings and establishing limited partnerships.

Closing thought: What can we expect from M&A activity in the European Life science sector in 2014?