NICE numbers at 20 – a closer look at cancer

There has been continual interest in what the UK’s Health Technology Assessment (HTA) agency, the National Institute for Health and Care Excellence (NICE), has said when it comes to cancer drugs. This is not only because of the desire to get access, but also because of high prices. NICE is now 20, and in a move to improve transparency produces a downloadable excel file for both cancer, and non-cancer, Technology Appraisals (TAs). Leela Barham combines the data and looks more closely at the trends in cancer and non-cancer TAs.

NICE has done more TAs on non-cancer drugs than cancer drugs from 1999/0 to 2018/19; 488 to 310 TAs. That hides variation by year though; in some years, cancer TAs have dominated NICE’s workload and the resulting publication of final TA guidance (figure 1). 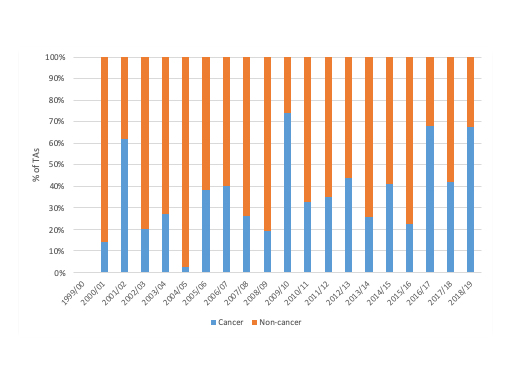 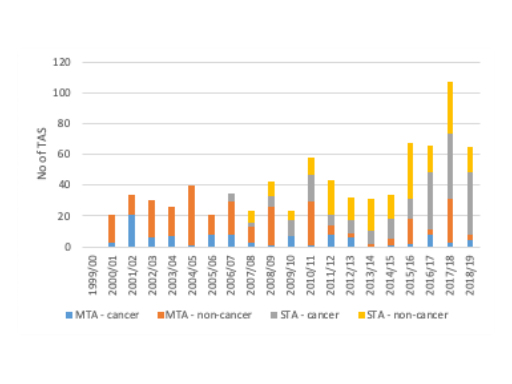 NICE had to set up a new process to deal with companies who chose not to submit. Non-submissions are increasing over time and it’s already a worry. It is however more of a worry for cancer drugs than others; in all pharmaceutical cancer TA recommendations published between 1999/00 to 2018/19 61% were non-submissions versus 39% outside of cancer. It’s also clear that the trend is worse in cancer in recent years than outside of cancer (figure 3). 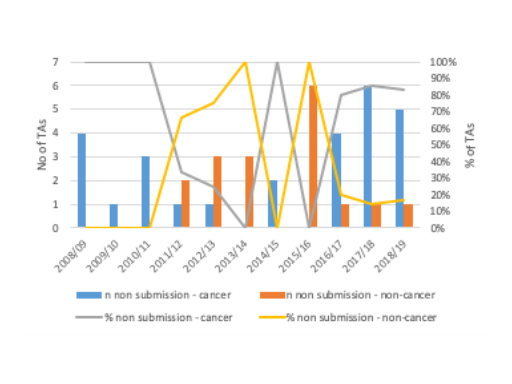 Cancer drugs are – by definition – systematically different to non-cancer drugs. They will differ in a host of ways aside from the science, be that in terms of their price, the evidence underpinning the submissions made, as well as in terms of the applicability of flexibilities available to NICE, particularly the application of End of Life (EoL) criteria which can allow NICE to recommend even if cost-effectiveness is above that normally accepted (around £50,000 cost per Quality Adjusted Life Year (QALY) versus between £20,000 to £30,000 per QALY for non-end of life drugs). It’s likely to be number of these factors which are at play and help to account for the higher proportion of cancer drug TA recommendations that are negative than for non-cancer drugs (figure 4). 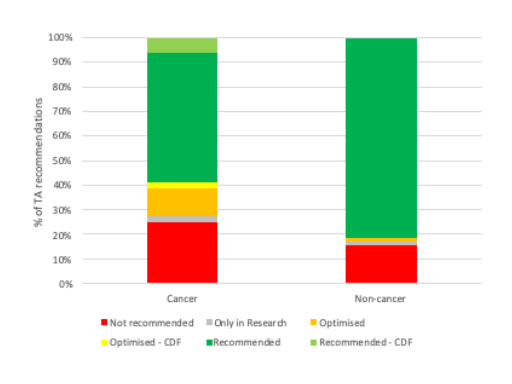 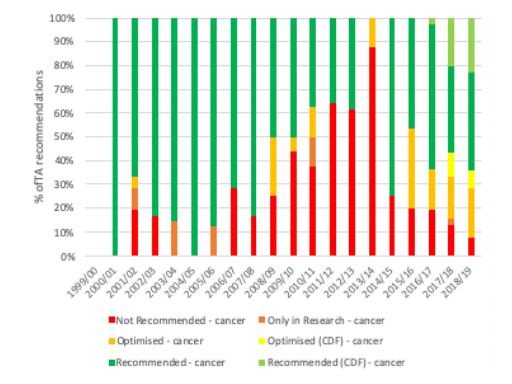 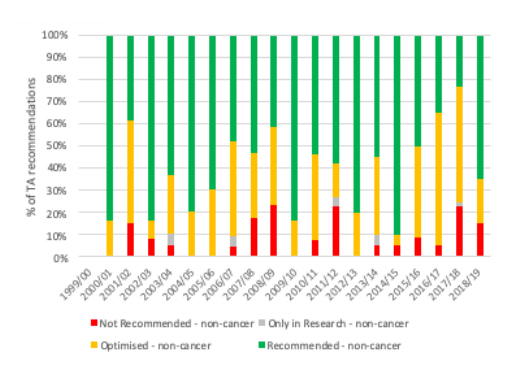 There’s an ongoing review of NICE methods, including those used for TAs. Whilst this review is not focused on any particular therapy area – quite rightly – there will be much interest in what it might mean for cancer TA recommendations. That includes not just whether the drop in rejections continues, but also in whether it could mean more submissions. It’ll be worth looking again at the NICE numbers in the future.