What HCPs think about online consultation

New research suggests that HCPs are in favour of video consultations, but GPs are cautious.

NHS England has a goal to “significantly improve patient choice” by 2020 and is aiming to use technology to help healthcare professionals (HCPs) deliver quality care. One contributor towards this goal is the Online Consultation programme.

In 2017 a £45 million fund, the GP Online Consultation Systems Fund, was launched. The fund was made available “to support digital confident practices to explore and successfully embed a model(s) of online consultations”. The fund is available until 2020. Consequently as we near the end of 2019, the question I am asking is what do HCPs think about online consultation? I set out to analyse the online HCP conversations on public social media to determine HCP sentiment towards video consultation at this time.

Healthcare professionals in countries all over the world have been talking about video consultation on public social media, but notably, there were more posts from HCPs in the United Kingdom than in the United States. While US online conversation among HCPs is generally higher than the UK, due to the number of physicians and their adoption of digital channels, the UK leads the world in the online consultations conversation among HCPs, likely driven by NHS plans.

Healthcare professionals writing posts in 2019 were much more positive than negative about the use of video consultation, 45% and 16% of the social media mentions respectively, while a number were undecided or were online asking their peers questions about it. 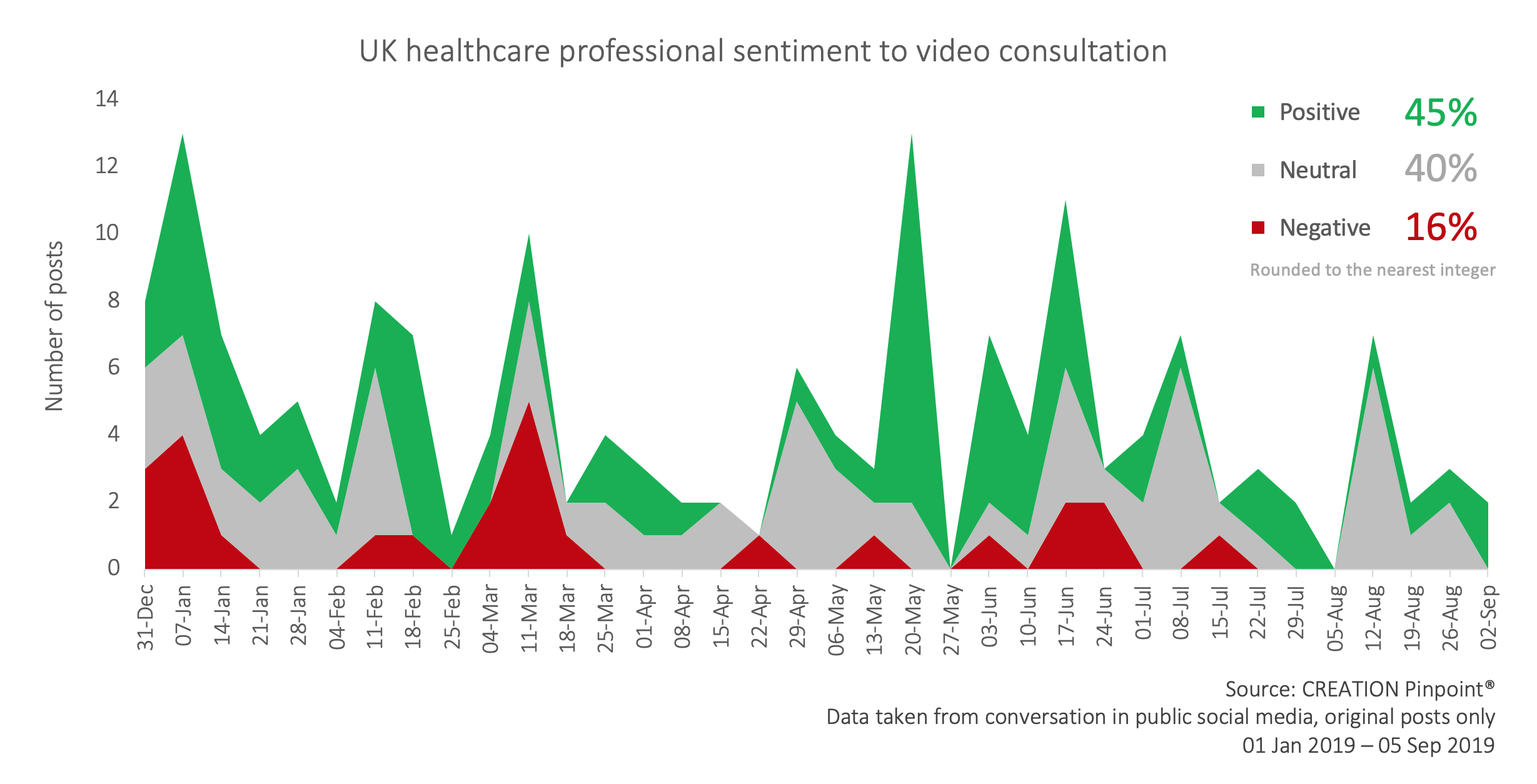 Many posts showing up positive in the conversation were from HCPs who have implemented video consulting with patients and are happy with the results, others went further and publically encouraged their peers to embrace the digital change and put into practice video consulting.

Many doctors, especially general practitioners discussed the time saved when using online video to see patients. If a patient needs a home visit the amount of time they may have to wait to receive that home visit might be more than that taken to set up a video consultation. Farzana Hussain, a GP in London, suggested the result of this could be better safety outcomes for the patient.

Great listen. Interesting to hear many single handed GPs hesitant to use digital solutions eg video consultations as it adds to workload. As a single hander my experience has been positive. Eg It can save time & increase safety to eyeball patients who would wait for home visits

The value of a patient’s time was also raised as video consultation negates the time spent going to the surgery and waiting for a consultation. As well as patients’ time spent travelling, financial efficiency was also cited as a reason to pursue online consultations as doctors shared how long they spend on the road during home visits. Less cars on the road is a positive result from an environmental perspective too, after Ajay Verma, a gastroenterologist in Leicester, shared his discovery that 5% of all road traffic in the UK is NHS related.

Another GP raised the point that there would be an increase in the flexibility of the time of day a patient would be able to see a doctor, as many surgeries work on a 9am-12pm and 3pm-6pm basis.

Doctors considered the advantages of video consulting to patients who would physically struggle to access a general practice surgery, such as the elderly or those living in remote areas. A specific case given was for patients with rare or ultra rare diseases. For these patients seeing a specialist at a Centre of Excellence for their rare disease might mean crossing the country or even visiting another country. This may be practically and financially challenging and the potential savings to the patients physical wellbeing are also considerable when thinking about a consultation they can receive from home.

This can be seen further in the location of HCPs talking about this online. Nation-wide 45% of HCP posts were positive and 16% were negative. London had a higher percentage of both positive (52%) and negative (28%) HCPs than the national average. 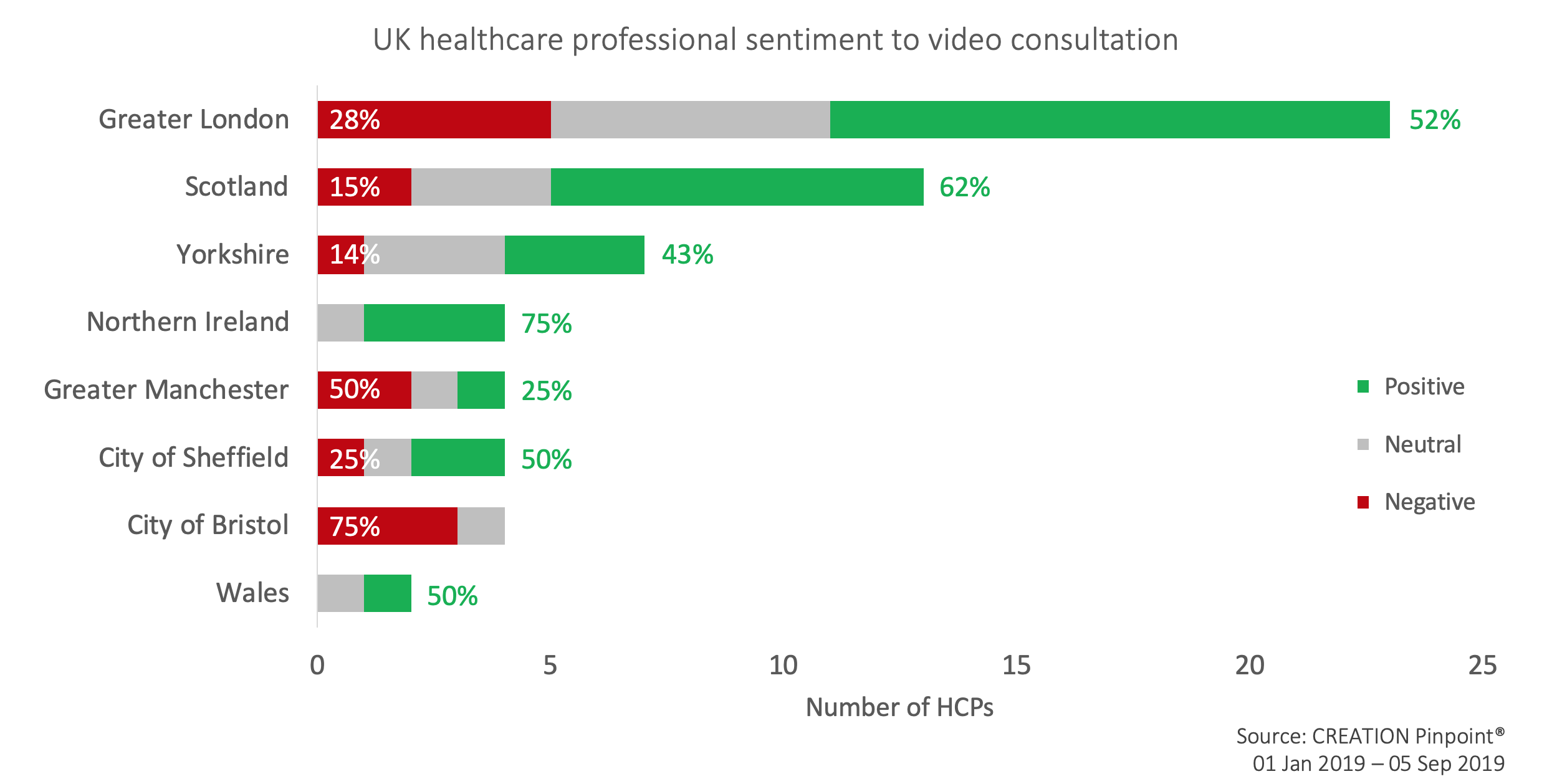 Other places where negativity was higher than average were Greater Manchester, City of Sheffield and City of Bristol. While much of the negativity comes from HCPs located in cities, proportionally HCPs in counties with larger rural areas are more positive about the technology advances including Yorkshire and counties in Scotland, Northern Ireland and Wales.

While the disconnectedness of talking through a screen was recognised by some doctors, Dr Hussain, for example, found that when using online consultations she found some patients were more likely to disclose sensitive topics that they would not have otherwise in a face to face consultation. She concluded any innovation is welcome if it benefits patient care.

Interesting debate. I used to think the same way as a GP where l know my patients well. I began to use online consultations & found that some patients disclosed sensitive topics that they couldn’t face to face. It’s about care that suits my patients & all innovations are welcome

While Dr Hussain felt more openness on video would lead to better patient outcomes there were HCPs on the other side of this argument. They believe the drawbacks of online consulting might worsen patient outcomes. There were safety concerns about being able to accurately diagnose conditions, specifically a question was asked by Dr Ingrams, a rural GP in Leicestershire, whether sepsis, a very serious condition, would be picked up on a video consultation.

Another concern with the technology-reliant interface was sensitivity, after the BBC published a story of a US doctor, who, speaking from the screen of a ‘video robot’, informed his patient that he was going to die. The GP in Bolton who shared the story said there is “a time and a place for remote consultations via technology-this was not it.”

Man told he's going to die by doctor on video-link robot. Time and a place for remote consultations via technology-this was not it. https://t.co/2ZpTg3vLXy

There was also a belief among some UK HCPs that the NHS technology infrastructure will not be ready for the desired level of availability for video consultation within the next few years.

Alongside the time and efficiency benefits the contrary was also reflected by GPs, some anticipating an increase in workload as they adapt to new technologies. Another reason the workload may rise would be an expected rise in demand to see a doctor from ‘less sick patients’. If ease of access to a medical professional goes up more access will be desired.

The greater the proportion of my face to face consults, the higher my job satisfaction and wellbeing

The greater the number of teleconsults, the more drained and burnt out I feel.

How do we manage this?@SteveLaitner@harrylongman@cgps_gp

On the extreme end of the effect on doctors, one GP in Bristol, who had begun video consultations, reported a lower job satisfaction and a lower sense of wellbeing after her first call. A rheumatologist in London felt online consultations were unnecessary saying “teleconsults are looking to fix a problem that doesn’t exist for 99.9% of patients”.

However, the healthcare professionals raising these concerns did not represent the full spectrum of health care roles. While nurses, pharmacists and allied health professionals were predominantly vocal about the advantages in the online conversation. Doctors, both general practitioners and specialists, were the authors who were not as optimistic about online consulting.

As online consulting increases in the NHS various health roles may be involved in using the technology. However, the schemes that are being invested in right now are those that will increase access to video consultations with GPs.

There was mixed sentiment among doctors but general practitioners were more skeptical than specialists. There were more individual GPs who were, on the whole, discussing video consultation negatively than those who were positive. More than one in three GPs were not negative in their posts about using the new technology, as seen in their online posts.

In the NHS Long Term Plan it is outlined that by 2023-24 “every patient in England will be able to access “digital first” NHS primary care consultations from either their own GP or a digital GP provider.” There is currently a wide spectrum of opinions among HCPs, especially GPs relating to technology driven consulting. Social media is a place where these opinions come out for good and bad. There are GPs who are inspired about utilising technology with the hope of improving patient care and the way they practice. Others, when considering the specifics of online consultations are firmly against the changes.

Based on the NHS Plan and what can already be seen, however, these changes are inevitable. But as the users on the frontline of video consulting it is important that GPs are not alienated by the process. It is vital at this time to both motivate GPs to embrace technological advances to patient care as well as to learn valuable lessons from their needs and concerns as expressed in the public online conversation. 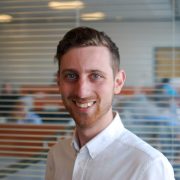 As head of insight with CREATION.co, Jamie Doggett leads a team that discovers what healthcare professionals think by analysing their online social media conversations. Jamie has collaborated with healthcare professionals, marketers and communicators to leverage data for health strategy, and has pioneered new research methodologies using CREATION.co’s global dataset. Research produced by Jamie and his team has informed academic articles, health policy, and product launches all over the world.

Measuring success in pharma marketing: Does engagement equate to prescriptions?