What HCPs think about mandatory vaccination

What HCPs think about mandatory vaccination

The practice of making vaccinations mandatory within a population has always been controversial. Historically, the first example of this was during the smallpox epidemic in the 1800s, when some European countries attempted to make vaccination against the disease compulsory.

While it is hard to argue against the overall aim of disease eradication, there are many ethical, medical, and social issues intertwined with the idea of enforcing vaccination.

However, in recent months, there has been a resurgence in conversation on this topic, with the ongoing pandemic prompting nations around the world to consider whether mandatory vaccination against COVID-19 is an appropriate measure to introduce for certain people groups or even entire populations.

Healthcare professionals have their say

Over a four-month period between 11th July and 11th November 2021, 23,186 healthcare professionals (HCPs) worldwide posted on social media 188,235 times discussing the topic of mandatory vaccination. It is important to note that this is a highly disputed issue among HCPs, which has brought many varying opinions to the forefront.

The two main contrasting perspectives taken by HCPs are:

The first HCP perspective to be explored is that mandatory vaccines are completely necessary to protect the health of society at large by ensuring herd immunity. Many HCPs with this view argue that vaccinations should not be a matter of personal choice and freedom, but instead ‘the price of living in a civil society’.

They encouraged those who oppose the mandate proposals by saying that vaccine mandates or passports are simply an extension of immunisation records, which are kept by billions of people around the world. HCPs referenced the historical mandatory vaccine against smallpox as proof of the effectiveness of mass vaccination.

Vaccines are not “personal freedoms.” They are the price of living in a civil society. The Supreme Court decided on this more than a century ago.

Vaccine mandates are precisely why we no longer have smallpox. pic.twitter.com/lbut0UPDWR

In addition to COVID-19, which dominated HCP discussions, other key diseases mentioned in the context of mandatory vaccines included measles, polio and influenza. 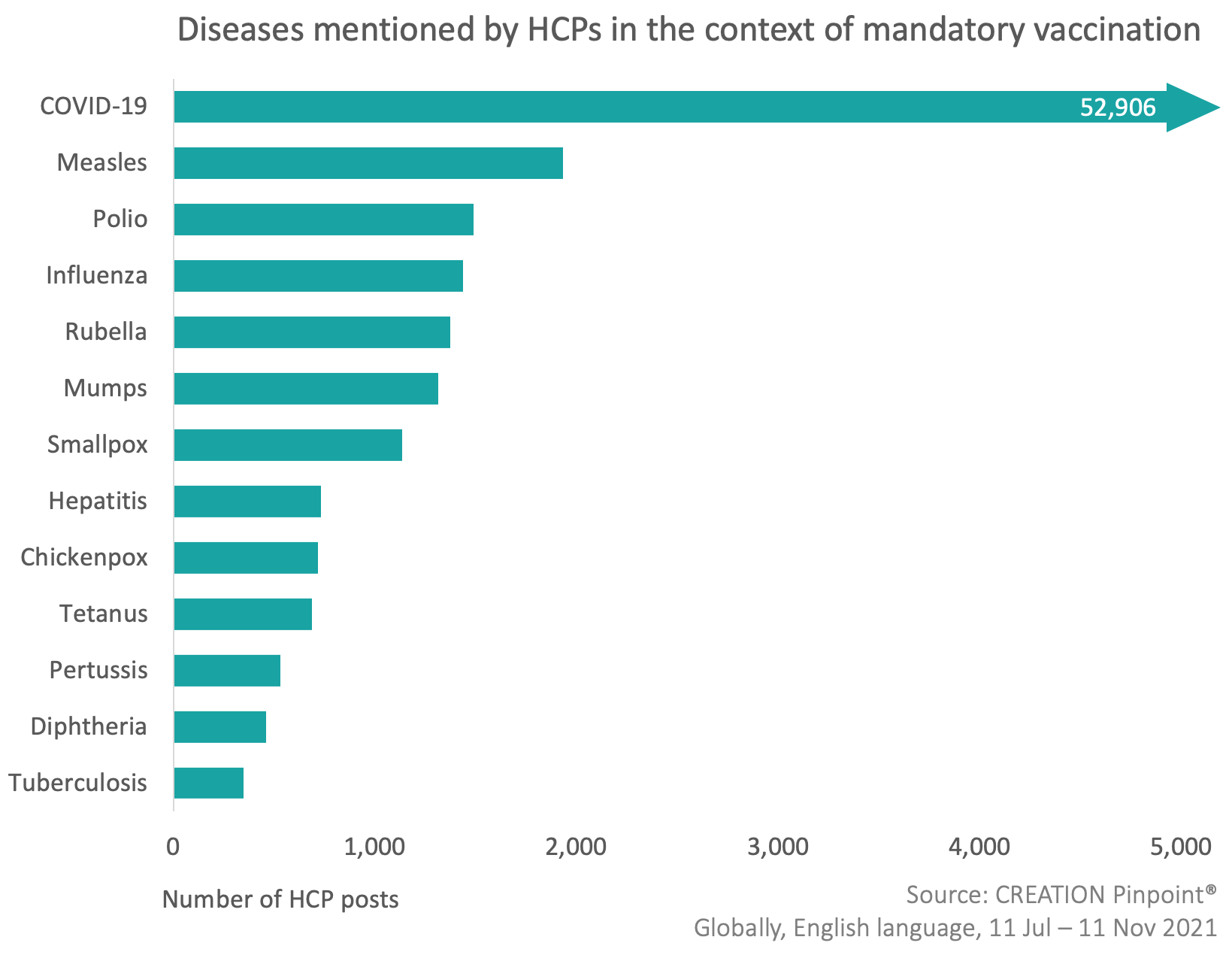 When discussing these diseases, HCPs were mainly referring to existing vaccine mandate policies, which stipulate, for example, that in many places around the world.

For example, parts of the US and Canada, children must be vaccinated against diseases including measles and polio before attending school, and those working in hospitals in many areas must also prove their vaccination status in order to be permitted to work.

The question arising from this comparison was – why should COVID-19 be treated any differently?

The second, contrasting, and more commonly expressed opinion of HCPs on social media is that vaccines are positive and should be highly encouraged but not enforced.

Whilst many HCPs with this view describe themselves as ‘pro-vaccine’, contrary to the above, they believe that vaccinations should indeed be a matter of personal choice and consent, and therefore presented arguments against the rollout of vaccine mandates or passports. HCPs also defended themselves when they came under fire from others, reinforcing the difference between opposing vaccine mandates, and opposing vaccines themselves.

I encourage everyone to be vaccinated, I'm vaccinated myself but I'm steadfastly against compulsory submission to any medical treatment. It's a basic principle of consent vs assault. The vaccine doesn't block infection/transmission. Protection to individual is being vaccinated.

How do vaccine mandates affect uptake?

Another factor in the debate around mandatory vaccination was the potential effect this could have on vaccine uptake rates. Again, there was a lack of alignment on this from HCPs, with some saying that making vaccines mandatory will only increase resistance from those who are already hesitant, and others giving examples of when doing so has led to increased adherence of vaccination appointments.

Another interesting point of view offered by some HCPs suggested that most people are not opposed to the vaccine; they simply do not believe in its importance for their own health but would get vaccinated if required to preserve their personal freedom.

I’ve started asking vaccine hesitant friends/fam what they’d do if vaccine mandates/ passports were implemented. Nearly all said “well then I would get vaccinated.” Feels like there are many that aren’t opposed to getting vaccinated, they just won’t do it if they don’t have to. 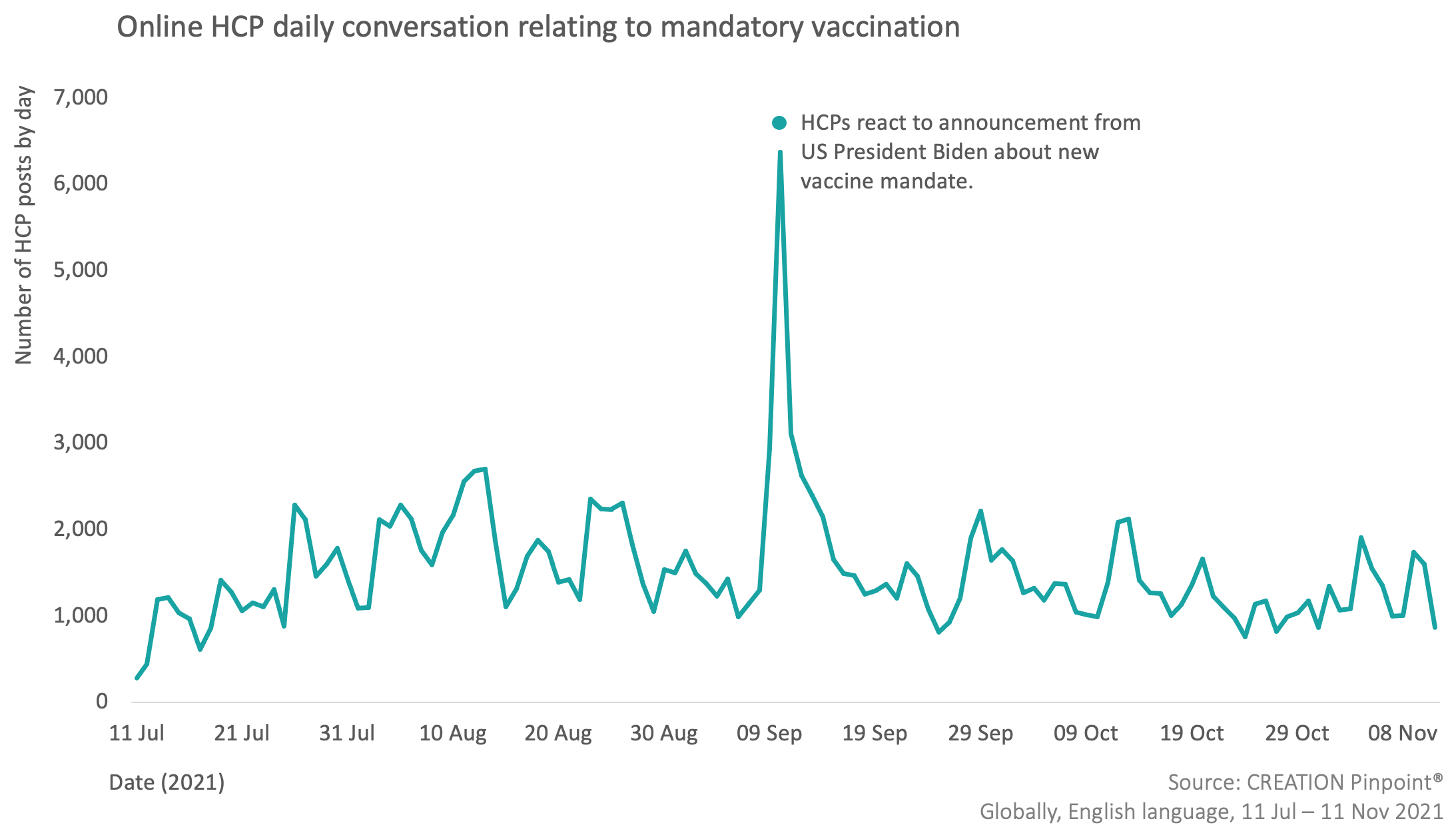 When analysing the daily social media activity of HCPs relating to mandatory vaccination, it is clear that the conversation reached its peak volume between 9-11 September. HCPs used social media as a platform to react to an announcement from US President Joe Biden regarding a new vaccine mandate that is anticipated to apply to about two-thirds of all US employees. The mandate itself requires anyone who works for a business with more than 100 employees to be fully vaccinated, with companies warned of substantial fines should they violate these rules.

HCPs offered many of the opinions explored earlier in this article, while also questioning why members of Congress have been made exempt from this rule. Another key concern expressed by HCPs was the segregation that may be caused as a result of the low vaccine uptake among the black and minority communities.

HCPs have been using social media to articulate their views about compulsory vaccination, with a wide variety of opinions underpinned by health, social and ethical factors.

While some HCPs support the idea of mandatory vaccination, most favour an individual-centred approach where vaccines are encouraged but not enforced. As the world waits to see the effects of COVID-19 vaccine mandates imposed by some nations, CREATION.co is monitoring the ongoing conversation.