Virtual healthcare during pandemic has won patients over; survey

Most patients who switched to virtual tools like video calls, online chat and apps to talk to their doctors during the pandemic want that to continue after the crisis abates, says a new survey.

The study by Accenture polled 2,700 cancer, heart disease and immunology patients from around the world, and found that nine out of 10 using remote services felt the quality of their care was as good or better than before.

All told, 60% of them want to use technology more to communicate with healthcare providers in future, adding to the evidence that COVID-19 could lead to fundamental changes in the delivery of health services.

In the US, for example, there is already pressure on the federal government to maintain reimbursement for telehealth services approved under emergency provisions.

Just this week, a letter was sent by 340 healthcare groups asking lawmakers across the political divide to  act quickly to make those changes permanent, saying that claims for telehealth in the US had risen 4,300% in March compared to the same month of 2019.

Some states have already moved unilaterally to make those changes permanent, namely Massachusetts and Pennsylvania, with others also reported to be considering permanent telehealth policies.

Accenture’s survey was carried out in patients in the US as well as China, France, Germany, Japan, and the UK in the midst of the pandemic lockdowns.

Unsurprisingly, patients were afraid to risk exposure to COVID-19 by going to their healthcare providers, and more than two thirds (70%) deferred or cancelled at least some parts of their treatment.

Nearly half of all surveyed patients also started getting some treatment at home using virtual tools, 70% of them for the first time. Among those, 63% rated the experience as good or excellent, according to Accenture. 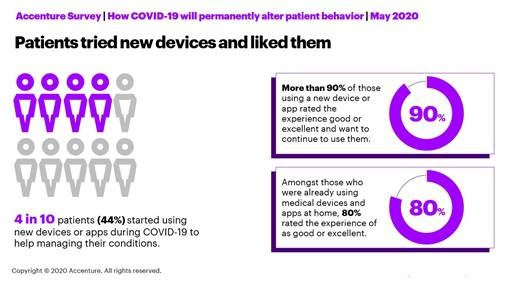 “Along with the move to virtual forms of care and communication came a sense of greater satisfaction with the care provided,” commented Brad Michel, Accenture North America Life Sciences lead.

“Many patients said they felt care was more personal, more convenient and timelier [and] a good many also said the information they received was better,” he added.

Among other findings were that 47% of respondents said they received better, more personalised responses, 41% said feedback was quicker, and 40% said access was more convenient.

The poll also found that digital tools helped offset some of the impact of the coronavirus crisis on clinical trials.

While 77% of patients said clinical trials had been suspended or delayed, among those whose studies continued 61% reported that virtual interactions were used to keep them going.

Using virtual technologies as a regular part of the clinical trial process would not only improve resilience to disruptions but would help to improve the patient experience, according to Accenture.

“Companies need to invest people, time and money now to build on this momentum to expand and enhance the tools and platforms they use to communicate with and provide care for patients,” said the company’s global head of life sciences Stuart Henderson.

He went on: “But technology is not enough, as companies must also continue to engage patients directly to deliver on expectations.”

Accenture teams up with Google Cloud on data-sharing platform