Today’s breakthrough in Brexit negotiations has been welcomed by the pharma and biotech industries in the UK and Europe, as it opens the way to talks on issues such as trade and drugs regulation.

UK prime minister Theresa May and president of the European Commission Jean Paul Junker announced early this morning that a deal on the Irish border question represented ‘sufficient progress’ to allow talks to proceed to the next phase.

The deal guarantees that there will be no ‘hard border’ between Northern Ireland the Republic of Ireland, and protected rights of EU citizens in the UK and UK expats living in the EU.

It also settled the so-called ‘divorce bill’, which is estimated to be between £35 – 40 billion.

The negotiating partners are confident that EU leaders will back the deal at Thursday’s European Council summit, allowing the UK and EU to negotiate on matters of trade and commerce.

Issues such as medicines regulation, trade, and customs arrangements will then be on the table, along with transitional arrangements to allow companies to get up to speed with Brexit, which is due to occur in March 2019.

The Association of the British Pharmaceutical Industry (ABPI) said the agreement was a significant step forward.

“The progress made on citizens’ rights is particularly welcome news for pharmaceutical companies and our employees. To provide certainty to everyone, we hope this is swiftly agreed,” it said.

“As we now focus on phase two of the negotiations, it is now crucial that the regulation and supply of medicines for UK and EU patients is prioritised. A co-operation agreement between the UK and the EU on medicines is the best way to ensure that there is no disruption to 500m patients receiving the medicines that they need.”

“This breakthrough, alongside a single-step fixed-term transition period that allows companies to make any necessary changes to the supply chain will be critical. Protecting public health in the UK and Europe must be a priority.”

Ensuring there is a transitional period is also a priority for the UK’s BioIndustry Association, representing the biotech sector.

Its CEO, Steve Bates, said: “It is now crucial that the UK and EU agree a transition period to ensure that the supply of medicines to patients in the UK and across Europe is not affected.”

“Public health and health security should be the first priority for the second phase of talks and we stand ready as a unified life science sector to provide expert input on such a process.”

“I hope the citizens’ rights proposals enable people to better plan their life science careers with their families. My initial reading of the ‘goods on the market’ proposals is that it should enable medicinal products that have been tested and released prior to the Brexit date, which may well now be later than March 2019, to be freely available in the EU, even if that testing and release is carried out in the UK and the goods are shipped to other EU countries after the UK withdraws.”

“This is important detail for global companies deciding how, and crucially when, to progress existing Brexit contingency plans.”

Proposals for the EU’s future relationship with the UK after Brexit, including a transition period and beyond, have already been leaked.

These suggest the UK could remain in the EU’s customs union and single market during any transition period, which is likely to last two years.

This is shorter than the three years that some business leaders, including AstraZeneca’s chairman Leif Johansson have called for, but will nevertheless be welcomed almost universally by business.

The plans also propose the UK remaining under the full jurisdiction of the European Court of Justice for a number of years after the March 2019 exit.

However given the deep divisions within the UK’s governing Conservative party on whether to aim for a ‘soft Brexit’ or a ‘clean break’ from the EU, there is likely to much more wrangling in the cabinet and Westminster over these issues.

This is likely to complicate and delay the second phase of negotiations, as it has the first phase, which must now be complete within the next 12 months or so. 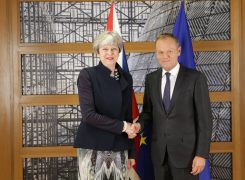 Theresa May and Donald Tusk

Donald Tusk, president of the European Council, warned: “While being satisfied with today’s agreement, let’s remember that the most difficult challenge still ahead. Breaking up is hard. But breaking up and building a new relationship is much harder.”