Senate could back Trump health law by 4th July, despite warnings of patient impact

President Trump’s American Health Care Act could be approved by the Senate before the 4th of July after a few tweaks convinced key Republican politicians to back the legislation.

This is despite widespread concerns that the plans would be bad for patients: In May, the Congressional Budget Office said up to 14 million people would lose health insurance in 2018, rising to 23 million by 2026.

The analysis also forecast that people with higher-than-average health care costs, such as people with diabetes, would see premiums increase so high that comprehensive coverage could become unaffordable.

The American Diabetes Association annual conference in San Diego opened yesterday, and the future of US healthcare is one of the hottest topics at the meeting. 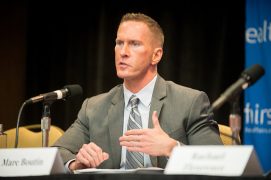 Marc Boutin, CEO of the National Health Council, which represents people with chronic diseases, says he fears for the 23 million who stand to lose health insurance.

“It could be life or death for some of these people. We have got to make sure that these people are represented,” he told a symposium at the ADA congress.

Last month Boutin said the AHCA was “bad policy, bad for people and especially bad for the 133 million Americans with chronic diseases and disabilities.”

At the same time, patient organisations are wary of being accused of partisanship in this highly politicised debate, and Boutin said the existing Obamacare arrangements don’t meet the needs of many patients.

Being closely involved in the Washington lobby process, Boutin provided an update of the negotiations going on within the Republican party.  He reported that 13 Republican Senators have convinced colleagues to back the bill in time for the short summer break for Independence Day on 4th July.

This has been achieved by proposing to delay the introduction of some of its most controversial measures.

Wavering Republicans are said to have been convinced to approve the reforms by a proposal to phase out cuts to Medicaid by seven years, although other reports suggest a three-year phaseout period.

The Medicaid cuts were of major concern to state governors who are up for re-election next year – but the delay means that they won’t face awkward debates on this policy before the mid-terms.

Boutin told the conference: “It takes away a lot of the political heat.”

Proposals to repeal taxes that support basic benefits introduced by Obama are also still part of the Republican plan. However the repeal will be phased in over seven years, providing more financial leeway.

But states will still be able to opt out of providing these basic benefits, which include cancer treatment and mental health counselling.

Other key AHCA reforms, such as the removal of the individual mandate requiring all citizens to have health insurance, are said to remain in the draft bill.  And worse of all for people with diabetes: plans to allow end measures which prevent insurers from denying coverage or charging more to people with pre-existing conditions.

A total of 29 million Americans have diabetes and 86 million have pre-diabetes, and ADA said last month it was “alarmed by the devastating impact the AHCA would have on people living with this chronic disease”.

The ADA’s president of Medicine and Science, Alvin Powers, said the organisation did not favour one law over another, but would campaign to ensure the needs of diabetes patients are met, whatever the outcome of the political manoeuvres in Washington.

A potent signal of the disregard diabetes patients are held in the White House came last month from Trump’s budget chief Mick Mulvaney.

Speaking about health reforms, Mulvaney implied that “the person who sits at home, eats poorly and gets diabetes” shouldn’t be eligible for publicly funded health insurance.

Despite a public rebuke from the ADA, no apology or correction was forthcoming from the White House – a portent that the Republicans are serious about pushing through the reforms, regardless of their impact on some patients.