A rap video used to motivate Insys Therapeutics’ salesforce into promoting higher doses of its opioid drug Subsys is the latest piece of evidence in the increasingly-bizarre trial of chairman John Kapoor.

Kapoor is accused along with other company executives of using bribes and kickbacks to boost sales of Subsys, its oral spray formulation of the powerful opioid fentanyl, and defrauding insurers.

“The more prescriptions written for Subsys – and the higher the dose – the more speaking opportunities were awarded and more fees paid to the clinicians,” the Department of Justice (DoJ) has said.

The lyrics of the rap’s chorus go: “I love titration. Yeah it’s a not a problem. I got new patients and I got a lot of ‘em.”

The video also features a rapper in a Subsys bottle costume marketed with the maximum dosage of 1,600 mg. At the end of the video, it is revealed that the costume was being worn by Alec Burlakoff, who at the time was Insys’ vice president of sales.

Burlakoff, who prosecutors allege was a key player in the illegal payment schemes, pleaded guilty to racketeering in November and is expected to testify against his former employees.

Insys’ former chief executive Michael Babich – who last month pleaded guilty to conspiracy to commit mail fraud and wire fraud, and to mail fraud – said that Kapoor saw the video with him.

Kapoor and the other executives, having realised that patients who started on the lowest doses of Subsys often ended up switching to competing opioids, sought to convince doctors to prescribe higher doses to increase earnings, Babich said. 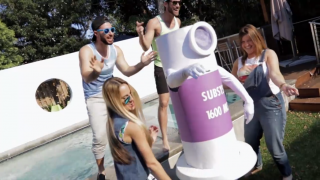 The trial, which has featured almost three weeks of testimony, has also included allegations that a former stripper who became a sales director for Insys Therapeutics gave a lap dance to a doctor as an incentive.

Other methods deployed by Insys included putting employees, relatives and girlfriends of doctors onto the company payroll, says the DoJ, and there was a concerted effort to get doctors to prescribe the product for non-cancer indications. The prosecution maintains Kapoor was fully aware of the illicit activity and orchestrated it.

Kapoor’s lawyer Beth Wilkinson rejected that accusation as “patently false”, according to a Reuters report, and she argued that Kapoor truly believed that the doctors were being paid to educate their peers about Subsys.

The case comes against a backdrop of an epidemic in opioid overdoses in the US, claiming the lives of more than 72,000 people in 2017, according to data from the Centers for Disease Control and Prevention (CDC).

After the charges against Insys were first levelled in 2015, the company underwent a revamp, letting 90% of its salesforce go along with a sizeable chunk of its senior management team.

It doubled down on R&D investment and went to the FDA with a sublingual spray formulation of buprenorphine, another painkiller, but that was turned down by the US regulator last year.