There is just a week to go before the remaining EU27 countries vote on which city should be the new home of the European Medicines Agency, which must leave London because of Brexit.

No fewer than 19 of the EU member states have submitted bids to gain the EMA, which will bring with it considerable prestige for the winning city, as well as around 900 highly qualified staff and thousands of visiting experts every year.

A set of strictly objective criteria for selecting the best bid has been laid out by the European Commission and Council of Ministers, however the history of where European agencies have gone shows politics have played a big role in the final decision.

One infamous example came in 2001, when then-Italian prime minister Silvio Berlusconi intervened in the decision about where the European Food Safety Agency (EFSA) should be located. The Commission had wanted to award it to Helsinki in Finland, but Berlusconi argued that it should instead go to Parma, in Italy, because of its reputation as a world-famous culinary centre.

Belgium’s prime minister at the time, Guy Verhofstadt, was among those arguing that the ‘gastronomic attraction’ was not a relevant factor – but Berlusconi nevertheless got his way, and the EFSA went to Parma.

There are now fears that similar wrangling between European leaders will produce another potentially perverse result. France and Germany are the dominant players in the EU, and are expected to manoeuvre for their own national advantage. 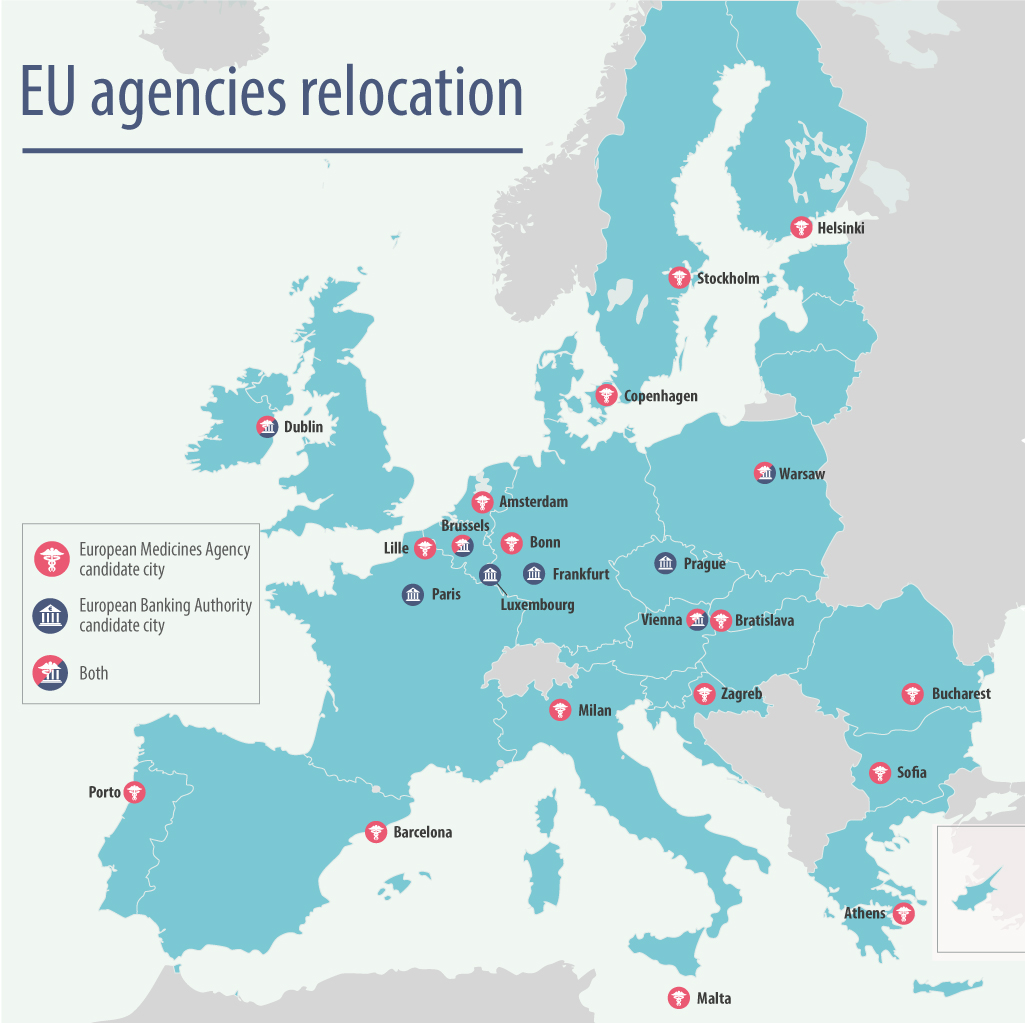 19 cities are bidding to be the new home of the EMA (image: European Commission)

The political intrigue is increased as there is another EU agency, the European Banking Authority (EBA), also set to leave London. Germany wants it for Frankfurt, a move which would help the city consolidate its place as the Eurozone’s financial hub.

France wants the EMA to come to Lille, and observers fear that mutual interest between the two nations to divide the spoils could result in Eurovision style tactical voting.

This could mean more suitable cities miss out. Last month, the EMA revealed a shortlist of five cities that were preferred by its own staff: Amsterdam, Barcelona, Copenhagen, Milan or Vienna.

The EMA staff survey suggested that a move to any of these cities would minimise the loss of employees, which the medicines regulator has warned could jeopardise its work across medicines approvals and safety monitoring.

Meanwhile, eastern European member states Romania, Slovakia and Bulgaria have also all submitted bids. These currently house no EU agencies, and officials from these member states say it is time to award the EMA to one of these nations.

Speaking out today, the European pharmaceutical industry association has put out a coded warning that politics should not sway the final decision.

EFPIA Director General Nathalie Moll said the decision should be made “on the basis of essential and objective criteria that place patient health at their core.”

She stressed that the expertise within the EMA and its scientific committees was critical to its successful operation, and disruption needed to be minimised.

EFPIA underlined the fact that it had also laid out its own six criteria for the decision earlier this year.

Nathalie Moll said: “As we are now just a week from the vote, we are calling upon Member States to base their decision on supporting the continuity of the EMA’s critical functions, its ability to retain staff and access expert networks. With the numerous technical aspects that need to be managed to ensure continuity of care for patients in relation to Brexit, Europe must get the EMA’s relocation right.”

The decision itself will be taken by a secret vote among the EU27 countries next Monday 20 November. However the complex process (see here for full details) may have to extend over three rounds before a final winner is announced, with the parallel decision on the EBA to follow shortly afterwards.