One of the UK’s leading institutes for early biomedical research has appointed Dr Jan Löwe as its new leader.

Dr Löwe has been selected as the new Director of the Medical Research Council Laboratory of Molecular Biology (LMB), which in recent years has forged new research links with pharma and biotech companies.

He takes over in the Spring from Sir Hugh Pelham, who is retiring after 12 years leading the institute.

LMB has been dubbed the UK’s ‘Nobel Prize factory’, as no fewer than 15 of its scientists have been awarded the prestigious prize since it was set up in 1962.

The latest was Dr Richard Henderson, who was awarded the 2017 Chemistry Prize for the development of cryo-electron microscopy. Henderson is also known in UK biotech circles for being co-founder of Heptares.

Discoveries made at the LMB formed the basis of many early biotech companies, including Domantis,  Ribotargets, Cambridge Antibody Technology (CAT), Protein Design Labs, Celltech and Biogen. The most famous of these was made by CAT, which was the original developer of Humira, currently the world’s biggest-selling drug.

The LMB is a multi-disciplinary institute dedicated to the research of important biological processes at the levels of atoms, molecules, cells and organisms, thereby unlocking the mechanisms of diseases.

Scientists at the LMB have made landmark contributions to science – such as in the sequencing of DNA and pioneering the method of X-ray crystallography to determine protein structure.

Löwe is currently the joint head of the Structural Studies Division at the LMB and Deputy Director of the institute, and has been selected after a competitive international search carried out by the MRC.

He said: “Not in my wildest dreams would I have thought in 1996 when I came here that I would one day be the director of this great institute. Being given such an important job makes me feel both excited and humbled. I will aim to preserve and develop LMB’s very special culture and people, so that new ideas keep the LMB at the forefront of molecular biology, where it belongs.”

As Director, Jan will have control of a core budget of some £190 million over five years and direction of over 700 research and support staff.

Professor Sir John Savill, chief executive at the MRC, said: “The LMB is one of the best biomedical research institutes in the world and we are thrilled that someone with Jan’s ambitious and pioneering vision will be leading the LMB at such an exciting time for innovation, both in cell and molecular biology, as well as the associated methods and technology developments.”

Sir John paid tribute to Sir Hugh’s time as Director. “Hugh has been key in developing critical collaborations, with the LMB playing a leading role in translating exciting discovery science into patient benefit through strategic research partnerships with world-leading companies.” 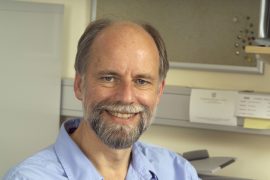 Sir Hugh has been responsible for creating greater collaboration with pharma, including AstraZeneca (AZ), which has moved to Cambridge to be closer to world-leading research institutes such as the LMB.

AZ has been working with the institute for many years, and in 2014 launched a new joint ‘Blue Skies Fund’, which aims to encourage scientists to push the boundaries.
This includes a range of pre-clinical research projects aimed at better understanding the biology of disease, including cancer.