Amsterdam will minimise disruption – but no EMA guarantee on approvals

Amsterdam was chosen as the new home of the European Medicines Agency (EMA) yesterday in a high-drama selection process, which saw the decision come down to the toss of a coin.

While there was bitter disappointment in Milan, which lost the coin toss, as well as runners-up Copenhagen and Bratislava, there was wider relief in the rest of Europe. That’s because the Netherlands’ capital should offer the least disruption to the EU medicines agency in its move from London.

But the relocation is just one part of the Brexit process of the UK leaving the EU by March 2019, a hugely complex undertaking which could cause massive disruption to the EU medicines supply chain and regulation.

The EMA oversees medicines approvals and safety monitoring for 31 countries, the current 28 EU members plus Iceland, Liechtenstein and Norway, a total population of around 500 million people.

In a press conference this morning in the aftermath of the decision, the EMA’s executive director Guido Rasi said the mood among the 900-or-so staff in London was improving, with the reality of the news just sinking in.

However Rasi could offer no guarantees that the move would not disrupt or slow down approvals of new medicines, but pledged that the agency would do everything it could to minimise the risk.

He said: “Now that we finally know where our journey is taking us, we can take concrete actions for a successful move.”

He added that Amsterdam ‘ticked many’ of the EMA’s boxes, with a staff survey showing it was the best case scenario – 81% indicating they would be willing to move with the agency.

But this remaining 19% represents around 200 people, and Rasi told pharmaphorum that there was no telling who would ultimately stay and who would not. He said he couldn’t rule out a ‘complete collapse in specific services’ if a group of people from one division were to leave, and if more senior experts were to depart. 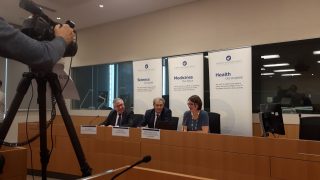 “At the end of the day, all the activities in relation to authorising, supervising and maintaining medicines have the highest priority,” said Noel Wathion. “That’s where all the efforts will be directed.”

Asked about the feeling within the agency staff, Rasi said: “The mood is 50/50: there is relief because we have now a decision. So we are start on the real process of seeing how the new environment will fit for each [individual].

“I have been so incredibly surprised by how resilient the people have been…in a sort of denial mood….they kept going without one minute of lost time or delay. That spectacular professionalism I enjoyed [witnessing].”

He said staff shortages would probably not delay medicines approvals, but could cause delay in the implementation of other projects, and improvements in processes, including in animal health and medical devices.

Rasi said it would take until the end of January for the EMA to establish an accurate picture of what its staff retention would be.

At a political level, leaders in the EU27 will want to ensure that Europe doesn’t fall behind in its medicines approval because of the EMA relocation and the wider Brexit process.

This may require compromise with the UK over post-Brexit collaboration: the UK and its pharma and biotech sector have called for an agreement allowing it to retain many features of EMA membership, despite this clashing with the UK government’s call for a ‘clean break’ with EU institutions.

The EMA currently relies on the UK’s MHRA medicines regulator for nearly 20% of its technical work, and regulatory experts say it will struggle to plug this gap if no deal is reached.