Amicus set for share of Fabry market after NICE approval

England and Wales’ cost effectiveness watchdog NICE has given a final recommendation to a new treatment for the rare Fabry disease.

The treatment could now gain significant market share from the existing treatments, especially as NICE says it represents better value for money, and may also provide more clinical benefits.

Galafold was approved in Europe in April 2016, and has now gained final NICE approval, after having come to an agreement with Amicus about a price cut, and limiting the use of the treatment.

The drug’s list price is £16,153.85 per pack of 14 capsules, which gives an annual cost of £210,000 per patient (excluding VAT). The company has agreed a patient access scheme, but the size of this discount, as is now standard, is confidential. 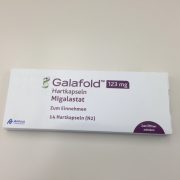 Galafold is now recommended as an option for treating Fabry disease in people over 16 years of age with an amenable mutation, only if it is provided with the discount agreed in the patient access scheme, and only if enzyme replacement therapy (ERT) would otherwise be offered.

The NICE committee commented: “With the discount provided in the patient access scheme, migalastat has a lower total cost than ERT, and potentially provides greater health benefits than ERT.”

Nevertheless, NICE’s committee noted that there were important limitations and uncertainties in the evidence presented for the drug – most notably that it had not evaluated Fabrazyme and Replagal for treating the condition.

NICE also has encouraged the company, NHS England and treatment centres to collect more evidence, particularly on the longer-term benefits of migalastat and ERT for treating Fabry disease, which should inform a future evaluation of the costs and benefits of all treatment options for Fabry disease.

Amicus’ treatment does have a drawback in that it only works in patients who retain some working enzymes—this amounts to around 30-50% of patients – which means there is still a need for the ERT drugs.

Why companies don’t submit to NICE