Getting better at measuring international uptake of medicines?

In part one of a two-piece series, Leela Barham looks at whether we are getting better at measuring international uptake of medicines.

The publication of a new report from healthcare analytics firm LOGEX, with the Institute for Rational Use of Medicine (IVM), on uptake in England should provide plenty of food for thought for the pharmaceutical industry.

The work concentrates on the five highest health gain (HHG) categories of medicines, comparing England to ten other countries, and it’s connected to the VPAS commitment to measure international uptake.

The VPAS is a voluntary agreement struck between the UK government and industry – via industry body the ABPI – and covers both pricing and access to branded medicines. The deal included commitments relating to measuring uptake as part of the quid pro quo for the money paid back to the Department of Health and Social Care (DHSC) by member companies. Paybacks have amounted to £1,698 million up to quarter two of 2021 according to data from DHSC.

The scheme included the commitment to reach “the upper quartile of uptake (in relation to comparator countries) for the five highest health gain categories during the course of the first half of the Voluntary Scheme.” The mid-point of VPAS was June 2021.

The LOGEX and IVM report, published in November 2021, is what has – eventually – emerged into the public domain as a result of this commitment.

The five highest health gain categories looked at in the report are:

The LOGEX and IVM analysis compares England with Belgium, Denmark, Finland, France, Germany, Italy, the Netherlands, Norway, Spain and Sweden (or at least tries to, it wasn’t possible for every treatment in every country).

Clarifying what should be measured

Measuring access to medicines (and all the other terms that are used, like adoption, uptake etc) and comparing across countries is not new. But it is hard.

The LOGEX and IVM report suggests that the ‘best’ metric for uptake is the ratio of the number of users of the medicine (numerator) and the number of eligible patients (denominator), using the right dosage. This is patient centred and meaningful.

However, this is a data hungry approach because you need to know how many patients are getting the medicine (and at what dose) but also how many should get it, which is not straightforward, and arguably especially hard is the latter. Add in the need to look across so many countries and it takes a lot of time and effort. The LOGEX and IVM report took from March 2021 to November 2021 to deliver a public report.

The LOGEX and IVM report makes it clear the trade-offs in terms of the precision of the metrics, and it proved impossible to generate the preferred metric for all categories and all countries.

The challenges in being able to measure uptake

The LOGEX and IVM report clearly maps what is available to inform the analysis for the five HHGs, no mean feat when looking at so many countries and medicines across different disease areas. But it also illustrates that not only is it not always possible to get to the best metric but in the case of atrial fibrillation and thromboembolism (anticoagulants) be able to come up with any comparison at all.

But given the data mapping that has been done and set out in the report, this also means that should future work be commissioned to look at progress over time, the sources are already identified, and handily, including when they will be updated.

The LOGEX and IVM report shows mixed performance for the five HHGs (figure 1).

The good news? Mostly England’s performance improved from 2019 to 2020 and tops the chart for cystic fibrosis medicines.

Uptake of smoking cessation is behind most of the other countries but this one seems to one that stands apart from the others; smoking is not a health condition and for some smokers they may not yet have experienced any negative health consequences for their health. It’s one where perhaps the preferences of the people involved may play a bigger role in shaping uptake. That highlights that there is a need to consider context and nuance.

Figure 1: Ranking of uptake in England of four categories of medicines with the highest health gain across countries 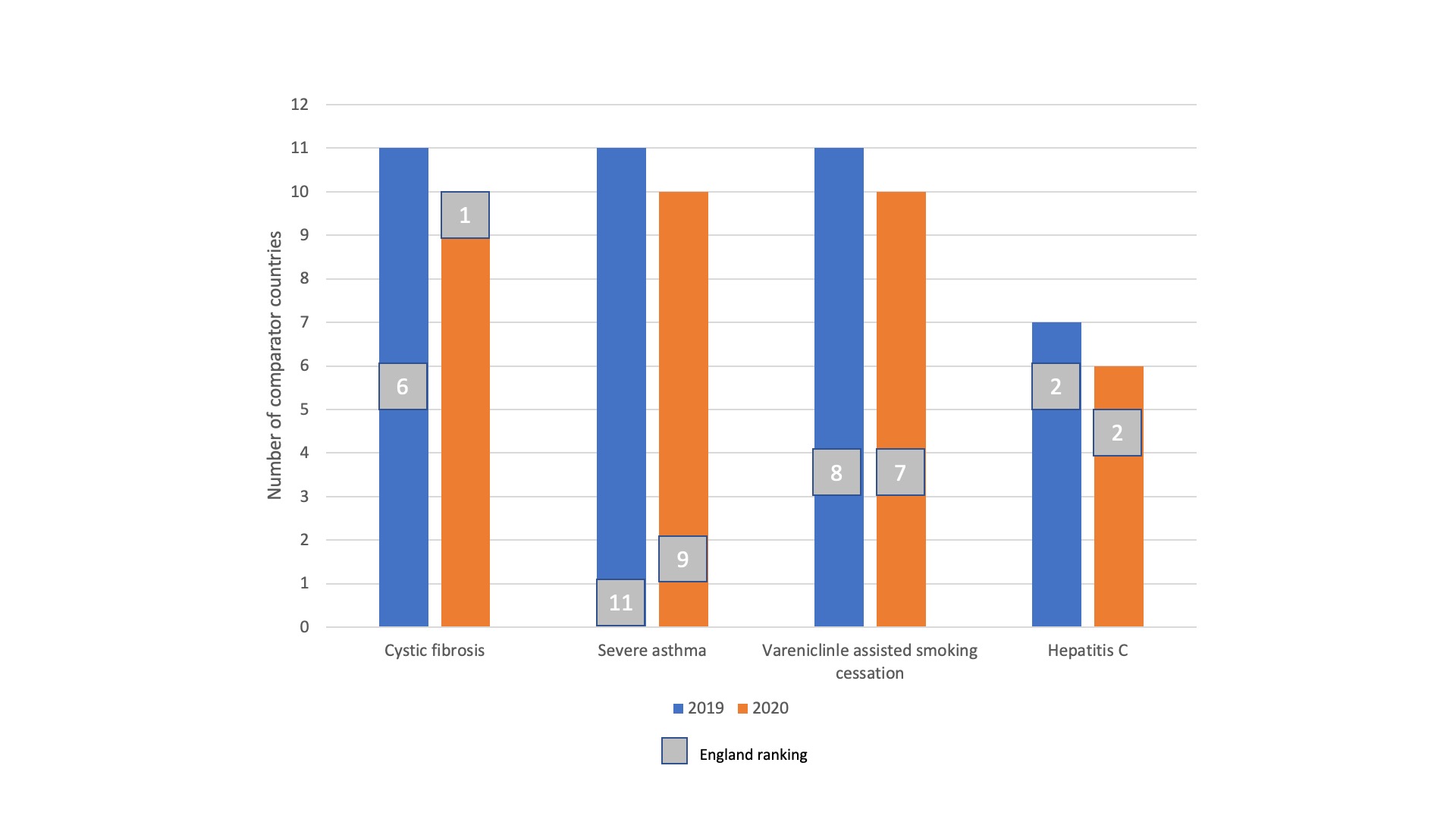 In only two of the five HHGs does LOGEX and IVM suggest that England is in the upper quartile of uptake (for cystic fibrosis and hepatitis C). Is two out of four, ok? That depends on your perspective, but it is clear that the target set at the beginning of VPAS has been missed.

Other measures of international uptake

The LOGEX and IVM report is a contribution that adds to other comparisons that have been done. For example, there is reporting of uptake of NICE approved medicines across countries that is within the Office of Life Sciences competitiveness indicators. This doesn’t break down the analysis so that we can look at individual countries nor categories of medicine (and they may change, OLS asked for views on them in September 2021). But this is routinely reported, whereas it’s unclear if the LOGEX and IVM work will be repeated or not.

The LOGEX and IVM report is also able to show how much can be done using open-source data, although it does draw on some propriety IQVIA data. That contrasts to comparisons such as those commissioned by the European industry group, EFPIA, that rely on proprietary data from IQVIA.

The LOGEX and IVM report is also able to get towards the preferred metrics which contrasts to the Innovation Scorecard. In recent years, that’s focused on defined daily doses, a measure that falls down the league table of preferred uptake measures.

People are always interested in comparing countries, and for good reason, it can help identify lessons to learn in order to do better at home. The LOGEX and IVM report is a useful contribution to help set the bar for what we should try to measure, unpick what can be measured, but more work is needed to look at what can be done to do better and increase uptake in England in future. But are we measuring what matters most?