Will Moore examines the reaction of the public and healthcare providers to the high-profile news of a two-year-old who died from Meningitis B infection and subsequent demands for more widespread vaccination in children. 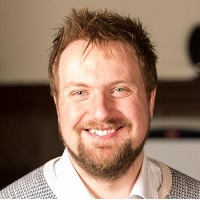 Over the last couple of weeks, social media channels and news sites have been filled with harrowing images of Faye Burdett, the two-year-old girl from Maidstone in Kent who sadly succumbed to the effects of Meningitis B after an 11-day battle with the infection. 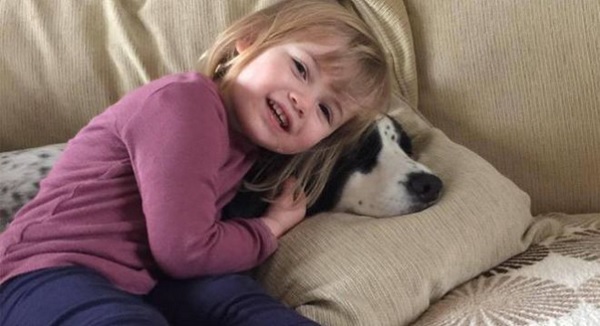 Faye Burdett before she fell ill.

The images, posted online by Faye’s mother, caused an emotional outpouring from the general public, with messages of support and encouragement starting to flood in almost immediately.

Alongside this support came questions, worries and concerns around vaccination, and the moral and financial implications of vaccinating new-born babies, but not toddlers and children. This follows a recent rollout of GlaxoSmithKline’s drug Bexsero for all babies born after May 2015.

These comments and questions quickly found an outlet via the UK government petition website, petition.parliament.uk. At the time of writing, the petition to have all children under the age of 11 vaccinated against Meningitis B stands at over 820,000 signatures, making it the most-signed petition in the history of the UK parliament.

We analysed the thousands of tweets and blog posts around this topic, looking both at the public view and those of healthcare professionals (HCPs). On Twitter alone, there were more than 12,000 tweets about Bexsero and the petition from 14-25 February, which represents almost 60% of the total mentions about the vaccine since the same time last year.

The recent spike in conversation is much smaller when looking solely at contributions from HCPs, and makes up only 1% of the total Meningitis B vaccination mentions on Twitter from 14-25 February, where usually 3-5% would be expected.

Please join the campaign to get all children vaccinated against #MenB at present 1 to 11 year olds are vulnerable https://t.co/o9rHlZX6US

While it would be fair to say the public conversation was the dominant voice in our analysis, with concerned parents and campaigners offering opinions and concerns around how to ensure the safety of every child under the age of 11, the issue also stirred up responses from blogging doctors, who took a far more pragmatic approach to the issue, offering up a more balanced perspective, highlighting implications for the NHS and other disease areas too. 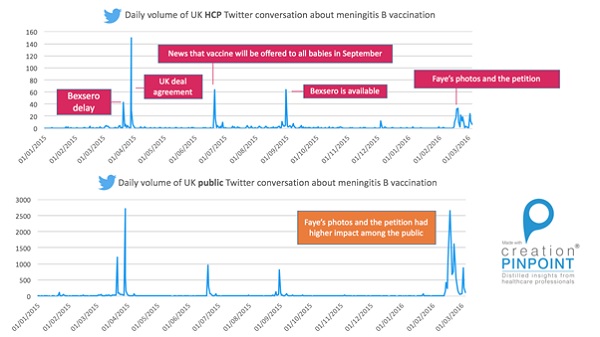 Many HCPs saw the cost implications of a wider rollout of the drug, with GP @tommacjones tweeting:

Dr Sarah Jarvis, a prominent GP and media influencer even went as far as to map out the potential costs of a revised vaccination plan across England and Wales:

– Immunising each child is likely to cost at least £60

If we were to include all under 11s, the equivalent cost would be £441 million.”

With supplies of Bexsero already dwindling, concerned parents paid upwards of £300 to have the vaccination administered to their children privately. All the media attention quickly turned the shortage into a drought, with one nurse on the Practice Nurse forum commenting online after trying to get hold of Bexsero for a private patient:

“I felt like I was trying to buy illegal street drugs when I tried to get some the other day – they grilled me for over 20 minutes on who it was for, whether they had already started courses, what date they were booked in (couldn’t understand that we run a drop-in service) and were extremely rude! Very annoyed that they didn’t bother to tell us of the shortage when they knew of it a couple of weeks before I called!”

Most private practices across the UK are now completely out of stock, with supplies unavailable until at least June. The below tweet from GP Dr Kannan Athreya is one that is echoed throughout the country:

BEXSERO (MENINGITIS B) VACCINE SUPPLY SHORTAGE-we will not be getting stock until June 2016 for new patients. https://t.co/Id8TpwWqeu

Since the petition saw such huge support, the Department of Health came back with an answer – and that answer was ‘no’. The financial implications for the NHS were just too high to include a vaccination for all under-11-year-olds.

So, is this the end of the story?

While current conversation has died down in both public and healthcare circles, the debate over whether or not Bexsero should have a wider reach, alongside the cost implications, manufacturing capability and risk/effectiveness, will continue to rage on.

As the above tweet from GP Dr Ellie shows, government legislation can sometimes be amended or even reversed and, if this is to happen, how will the healthcare profession react?

Although it would be an incredible achievement to provide every child with immunity, the harsh reality is that money only goes so far. The tough decision to limit the Bexsero rollout means that NHS funding will continue to be directed to other life-saving treatment areas.

HCPs, many of whom were not swept up by the wave of social media after 14 February, were able to offer some thoughtful responses to the implications of a widespread rollout of Bexsero. It’s a great example that shows how to learn from the views and experiences of HCPs and to realise that they are living and breathing the NHS day-to-day and can offer a balanced and informed view on difficult health decisions.

Will Moore is Creation Healthcare’s Chief Evangelist. His role sees him working across the organisation to help develop and deliver the story of pharmaceutical market innovation, connecting the dots between our clients, projects, team and the wider industry.

Read another ‘What doctors say’ piece:

What doctors say about that Super Bowl OIC ad

Beyond the pandemic: the potential of mRNA technology