Leela Barham looks to therapy assessment practices in Australia and Canada as pointers for how fees might be rolled out in England.

The Department of Health (DH) in England recommended exploring the idea of charging industry for Technology Appraisals (TAs), as part of the very first triennial review of the National Institute for Health and Care Excellence (NICE). What can be learnt from those countries where industry already pays for health technology assessment (HTA)?

Plugging a gap in funding NICE

NICE has become a key agency that influences access to medicines, not only in England, but also across the UK and further afield. However, it is doing this work while receiving less funding from Government (figure 1). 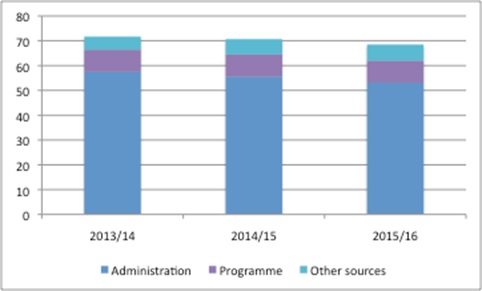 It is also getting busier, adding a host of activities to its to-do list, ranging from social care responsibilities to Highly Specialised Technologies (HST) appraisals from April 2013, as well as increasing the number of TAs it is publishing each year (figure 2). 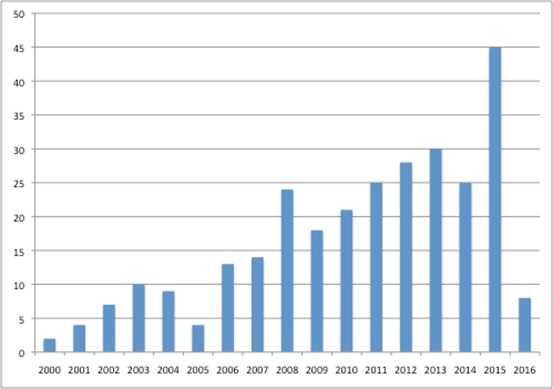 Source: Analysis of data from NICE

The DH has suggested fees as a way to generate revenue, but also as a way to streamline the approach of NICE. It suggested that the advantages and disadvantages of charging the industry be considered by the Accelerated Access Review (AAR) (an independent review exploring how to speed adoption of innovation in the NHS), which is due to report in April 2016.

In Australia companies have had to pay for Pharmaceutical Benefits Advisory Committee (PBAC) and Pharmaceutical Benefits Scheme (PBS) listing since 2010. Their approach is to split the charge between the lodgement (type of submission) and pricing (where the charge reflects the budget impact of the product and the complexity of the price negotiation). They charge for independent review too (Table 1). Fees are waived for orphan drugs and those products offering public benefit that would otherwise not be submitted. 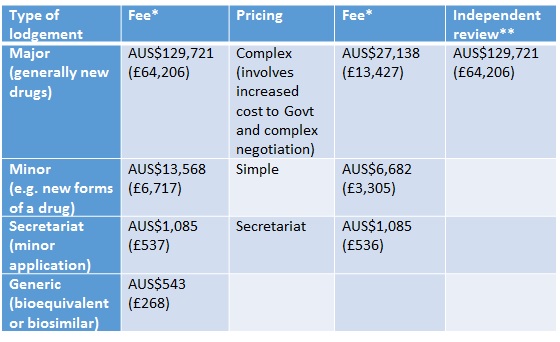 Source: PBS
* Currency exchange rate from xe.com as at 29 Jan 2016
** When PBAC has declined to list a new drug/new indication of a drug

The fees reflect the cost of dealing with submissions and pricing and resulting listing on the PBS, and are increased each year on the basis of the Consumer Price Index. Fees don’t go direct to PBAC, reflecting concern about compromising its independence, but instead go back to the Australian Government Consolidated Revenue.

The fees were not popular with the industry, which was consulted as the legislation to introduce the fees was introduced and which remains opposed even today. There were concerns about whether it would discourage entry of new drugs, pass on the fees through higher prices, or discourage development of drugs in lower-volume markets, as well as placing a particular burden on small companies. There was a potential upside though: the prospect of better quality reviews.

An early review of cost recovery by PBS suggested that fees were not always keeping up with evolving HTA, as more effort is required to bring in consumer input, for example.

Fees are still very new in Canada, with those for the Common Drug Review (CDR) introduced in 2014. As was the case in Australia, fees were introduced to help recover part (~40%) of the costs of undertaking the work, but also to boost capacity to undertake more appraisals of cancer drugs under the pan-Canadian Oncology Drug Review (pCODR).

Just as in Australia, fees differ according to the type of submission (Table 2). Unlike Australia, though, there is no charge for a procedural review request. Companies may also receive a payback if the Canadian Agency for Drugs and Technologies in Health (CADTH) is not speedy enough in producing an initial recommendation. The aim is for the majority of products to receive an initial recommendation within 180 days of the company’s submission being deemed complete.

Lessons for the UK

Charging the industry for HTA is not routine and it is still a bit early to judge. However, experience in Australia and Canada could help shape the development of fees here in the UK. For example:

• HTA should benefit stakeholders if it results in improved allocation of (often public) resources so industry should pay a fair share, not necessarily the full cost

• Fees can be structured to try to incentivise performance, as illustrated by the Canadian approach linking a refund if CADTH takes longer than 180 days to provide an initial recommendation

• Fees that increase in a proportionate way, as seen with use of the Consumer Price Index in Australia, avoid industry shouldering a high increase in fees

• HTA evolves and, if fees reflect the effort involved, those fees will need regular review to keep pace.

With the AAR due to report in April, we should find out soon if industry will have (yet another) cost to add to the process of bringing their products to market in England.

Leela Barham is an independent health economist and policy expert who has worked with all stakeholders across the health care system, both in the UK and internationally. Leela works on a variety of issues: from the health and wellbeing of NHS staff to pricing and reimbursement of medicines and policies such as the Cancer Drugs Fund and Patient Access Schemes. Find out more here and you can contact Leela on leels@btinternet.com.

End-of-life treatments: what will NICE accept?

Rises in non-submissions to NICE: do they matter?