Why is rare disease funding rare?

Oliver Timmis explores the problems associated with securing funding for rare disease research and questions why more funding isn't available in this space.

Yet rare diseases are important. In 1657, one of the fathers of modern medicine, Dr William Harvey, explained:

"Nature is nowhere accustomed more openly to display her secret mysteries than in cases where she shows traces of her workings apart from the beaten path; nor is there any better way to advance the proper practise of medicine than to give our minds to the discovery of the usual law of nature by the careful investigation of cases of rarer forms of disease."

Over 350 years ago, we knew about the link between rare diseases and common diseases. The best way to understand something is to research it in its extreme form. We have shown this in AKU research, as we believe that AKU (affecting around 80 people in the UK) is an extreme form of osteoarthritis (affecting more than 8 million in the UK). Our partners at the University of Liverpool compare bone samples from AKU patients with osteoarthritis patients. They discovered trabecular excrescences in AKU bone – microscopic lumps created when the bone reacts to AKU disease. The research team also found these excrescences in osteoarthritic bone; a new discovery about a disease which affects millions and that would not have been made without AKU research.

Last year, Professor Doris Zallen, a member of NORD's Medical Advisory Committee, gave support to this idea in her open letter responding to an article in the Hasting Centre Report:

"rare diseases, because they often have a singular genetic basis, present unique scientific opportunities for discovering and understanding gene action without the confounding factors that characterise the common disorders (factors such as contributions from multiple genes, environmental influences, diet, smoking and other life-style choices). The study of rare diseases has already provided fundamental understandings of genetic systems, biochemical pathways, and DNA-repair mechanisms that have helped elucidate the basis of and improve treatments for common diseases."

"...like the diseases they aim to help, the funding opportunities for rare diseases are rare."

So, based on these opinions, rare diseases should be readily researched with easy access to funding. However in reality, funding is severely limited. Rare Disease UK's report "Funding Support for Rare Disease Research: Raising Awareness and Increasing Transparency" includes annex 5, which summarises rare disease funding from four of the UK's top medical research funders. The text is copied below: 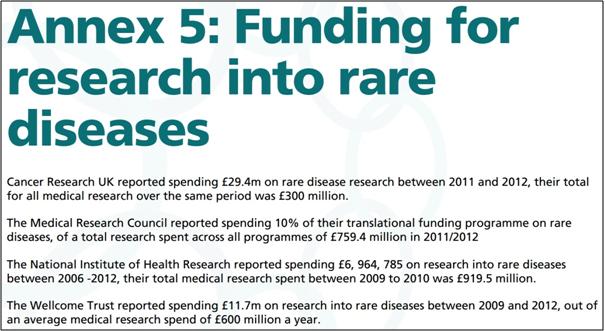 I decided to look at those numbers as a percentage of total research funding, working out how much each funder spent on rare diseases on average per year:

2. The MRC spent 10% of their translational fund – which according to their annual report for 2011-2012 totalled £34.1 million; that means they actually made around £3.4 million available for rare disease research. I have assumed they use no other funding sources for rare diseases. Their total spend on research for the same period was £759.4 million.

So in reality three out of the top four funders spend less than 1% of their funding budgets on rare disease research on average each year. The fourth (Cancer Research UK) spend 9.8% but as it is specific to cancer; and rare cancers only form a small percentage of the total number of rare diseases, I would expect their contribution to be much smaller when taken as benefitting all rare diseases.

"...three out of the top four funders spend less than 1% of their funding budgets on rare disease research on average each year."

The low percentage of funding from the NIHR is particularly worrying, especially in the light of recent calls for rare disease drug funds. Rare diseases often require specialist care, so the impact of rare diseases can be seen in the budget for specialised services commissioning, which is currently around £11.8 billion per year – 10% of the total NHS budget. The AKU Society uses specialised services commissioning, in order to provide the National AKU Centre, a treatment centre based in Liverpool. One of the more persuasive arguments when applying for the centre we used was backed up by independent research which showed that spending money on early prevention saved money on later treatment. AKU is an expensive disease to treat as the current best practise is to provide multiple joint replacement surgeries. Any reduction in those surgeries – for example through the drug we are researching in the DevelopAKUre clinical trials – would result in a major overall saving for the NHS. My argument therefore is that funders, and especially the NIHR which acts for the benefit of the NHS, should fund much more research into rare diseases with an aim to provide methods to prevent the later high costs of treating a severely ill rare disease patient.

However the funding for rare diseases remains minimal – an almost insignificant percentage of the budgets of these four top medical research funders. Yet as you read in the quotes and AKU example I mentioned earlier, rare diseases are vital for understanding common diseases. Another quote; this time from Sir Archibald Garrod, who first described AKU, explains this well:

"The study of nature's experiments is of special value; and many lessons which rare maladies can teach could hardly be learned in other ways."

One problem is the lack of public awareness. In France, the French Telethon is a joint publicity campaign and fundraising event, which in 2011 raised over €94 million for rare diseases. That converts to about £80 million which is twice what the top four UK research funders spend together on rare diseases (my estimates above calculate about £37.86 million in total per year). This shows the importance of a public campaign, as awareness of a problem always drives funding and action.

"the disease orphans its patients through a disconnect to the rest of the society, the medical profession and even the patient's family."

One of the reasons why the French Telethon is so successful is that it doesn't use the term 'rare diseases' – instead it uses the name favoured by the European Medicines Agency: 'orphan diseases'. Unfortunately to the UK public, it doesn't really mean much, apart from a vague idea of diseases caused by the loss of your parents. However in the rest of Europe, 'orphan diseases' is a powerful name. It relies on the idea that the disease orphans its patients through a disconnect to the rest of the society, the medical profession and even the patient's family. Rare disease patients are known to have high rates of depression, as when you are one of very few people with a disease, it's hard to find someone who can relate to you. The idea of a disease orphaning you from everyone else is apt, and one that helps to capture public attention.

How can we raise public awareness on the importance of rare disease research?