As R&amp,D costs increase pharma is faced with, according to the media, a ‘perfect storm’ resulting in a need to find a new direction for future growth in the industry.

The future direction of pharma remains unclear and many considerations need to be undertaken to find the optimal way ahead. Future potential business models and points for consideration were addressed at the recent Economist conference ‘The pharma summit 2012 – finding new directions’ and are discussed below.

The crisis in pharma has been overstated by the media, claimed Stephen Whitehead, Chief Executive of the ABPI. Whilst barriers to market access do exist on both the supply and demand side, R&amp,D has always been cyclical in nature and so declines are to be expected.

Regardless of the current concern, there was a wave of new medicines in the past year. We have seen new launches in disease areas, such as lupus, hepatitis C, bowel cancer and anticoagulants, with the majority of growth is being seen in the western world.

Despite the decline in investment in R&amp,D in recent years, attributed to the closure of R&amp,D plants, slashing budgets worldwide and regulatory challenges, output has been increasing in terms of number of drugs approved (figure 1). So whilst the media continues to highlight the current struggle of pharma, the figures don’t necessarily reflect this. 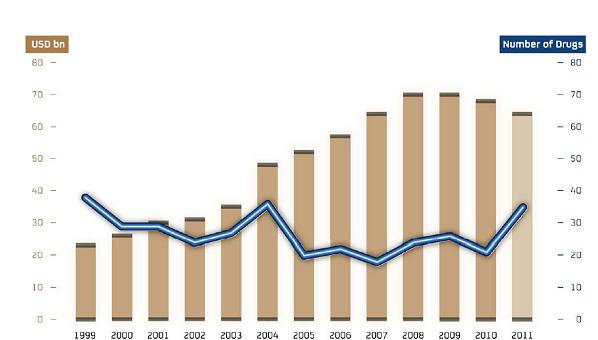 Furthermore, as Simon Moroney of MorphoSys explained ‘we can expect more change in the industry in the next ten years than we’ve seen in the last 30’. He also highlighted that innovation is more likely to come from outside pharma.

“…pharma costs equate to around 15% of total healthcare costs…”

Is biotech the way forward?

Combined market capitalization of the top ten pharma companies in 2000 compared with 2011 do show a clear decline (figure 2). However, if biotech companies are also taken into consideration, the overall market cap is approximately the same between 2000 and 2011 as the market capitalisation of biotech has doubled in that time (figure 2). 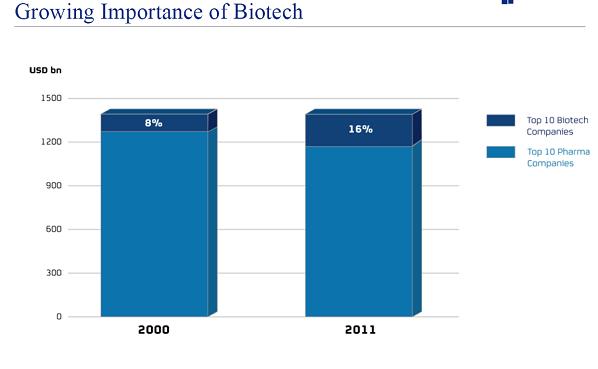 Figure 2: A comparison of market caps shows the growing importance of biotech*

Simon also pointed out how the level of excitement, commitment and dedication in a small biotech company that can’t be recreated in large organisations and therefore, maybe biotech’s time has finally come.

Regardless of the increase in outputs of pharma, R&amp,D investment has declined in recent years and affordability is a huge issue. But, as Stephen Whitehead highlighted, with new drug development comes the overall reduction in healthcare costs citing examples such as antipsychotics resulting in the closure of many mental health units in the western world. So can we afford to not invest in R&amp,D?

The drive to lower drug costs obviously impacts on available funds to invest in R&amp,D. Yet, pharma costs equate to around 15% of total healthcare costs. If the system were drug free, 85-90% of problems would still exist, suggesting a cost cutting exercise should be undertaken across the industry as a whole, rather than focusing on just drug pricing cost, to save jeopardising innovation in R&amp,D.

Important considerations for the future

The shift from provider to payor, which has been accelerated by the economic climate has helped pharma companies shift their focus to the needs and value to the patient.

A great example is the model of VIIV healthcare, where the focused resources of two large companies contributed to a new company that is focused on just one disease – HIV – with extensive partnerships and collaborations, from medicine to delivery with the patient at the center helping to drive treatments.

Patients are also helping to drive diagnosis, as highlighted in our recent article series by Wendy White, who was speaking at the Pharma Summit. Doctors no longer have the bandwidth to digest all the latest medical information, which has resulted in patients become the primary drivers of diagnosis, particularly in areas such as rare diseases.

“By tightening our therapies, and identifying subsets of patient populations, we can work on a more targeted approach”

Freda Lewis-Hall, Chief Medical Officer Pfizer and HBA 2011 Woman of the Year, suggested that the future of healthcare lay in tightening our portfolio and targets instead of broadening. From our understanding of cancer, we’ve learnt that it’s not just one disease so one therapy isn’t going to work for every patient. By tightening our therapies, and identifying subsets of patient populations, we can work on a more targeted approach, she suggested. A thought, which echoed Wendy White’s observation – innovation, happens at the margins.

Keeping the patient and health system at the centre of development isn’t just true for richer countries. Earlier consideration of how the product will be used, combined with efficiency in price will help to prevent further unnecessary deaths in less developed countries.

Shockingly, a child dies every 20 seconds of a vaccine-preventable disease. Nina Schwalbe (GAVI) highlighted how GAVI have prevented 5 million deaths by immunising 280 million children to date. However, what is essential, she explained, is forethought throughout the development process of how treatments will be used and considerations of healthcare limitations in poorer areas.

Tachi Yamada, former President of the Global Health program at the Bill and Melinda Gates Foundation and now EVP, Chief Medical Officer of Takeda spoke of how future growth will be seen in emerging markets where life expectancy is at only around 50 years, citing the example of TB, which is still a huge problem in Brazil, Russia and China. TB continues to kill millions and remains a neglected disease in these areas.

Whilst ensuring neglected diseases aren’t ignored is essential for humanity, in such austere times can we afford to be focusing our efforts here? GSK reassures that whilst some shareholders seek to see more immediate returns on investment, many are long-term growth investors and see clear growth opportunities as a long-term position in emerging markets. And with such promise of growth in these areas, can we afford not to invest in emerging markets?

“…true innovators have no peers…”

How can we encourage true innovation?

As payers increasingly seek to see innovation, R&amp, D must realign its efforts to develop and deliver more products of value.

But what are innovators seeking from payers? Anders Ekblom of AstraZeneca summed this up as:-

1. Reward value: reward the value that medicines provide to the overall cost of health

2. Create trust: consider all relevant data in decision making and create a transparent system for the decision-making process

3. Rigour into system: instil rigor into decision-making process to insure they reflect the needs of the population

4. Justify decisions: with clarity and give innovators opportunity to reflect and react

5. Act as promptly as possible: it can take payers up to a year from approval to agree on pricing

There is no question regarding the demand for new medicines, however we are seeing a decrease in the rewards for the risks involved in R&amp,D. Incentives really need to be available for pharma to take the increasing risks associated with R&amp,D investment if true innovation is to be encouraged.

There is no question as to whether changes in the business model need to occur, however what is not clear is what the new business model should look like. Looking to other industries such as the IT industry, where a move has been seen from selling hardware to providing solutions, could provide answers.

Despite current concerns surrounding the industry, increasing treatments are emerging in both developed and emerging markets and biotech is expanding to play a larger part in healthcare. As growth in these areas continues it’s important to keep in mind the three take-home messages of the economist conference:-

• Treat the patient and not the disease

• Be mindful of neglected diseases and emerging markets

• Innovation is key – don’t give up on innovation and if needed, find new ways to innovate. As Takeda stated, peer review is the death of innovation – true innovators have no peers so let’s not let experts kill ideas!

Has the industry given up on innovation?