The pharmaceutical industry and rare diseases – is it time to put the record straight?

Neil Dickinson of Dice explores the public’s perception of drug development for rare diseases and questions whether it is time that the record was put straight. 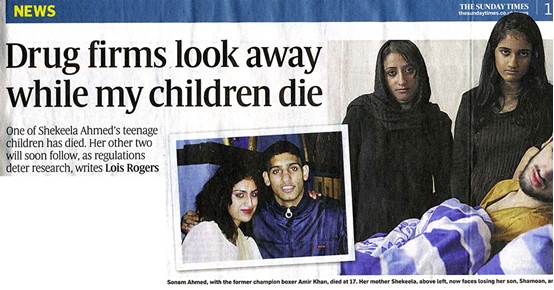 Have you heard of Lafora disease?

“No” is the most likely answer. That was certainly the case with me until I was alerted to it by, of all things, The Sunday Times late last year. Unfortunately, this wasn’t a good news story: it was the tragic tale of a mother facing the prospect of losing her three teenage children to this devastating disease before they reach adulthood.

Like many rare disease stories, it leaves you with a feeling of sincere sadness for the victims and their families, and helplessness that such a simple genetic mutation can wreak so much havoc on the human body. But on this occasion, these feelings were matched by ones of frustration and almost anger.

Take a good look at the headline and ask yourself if this is a fair representation of the story. I simply don’t know if there is any ongoing research into Lafora Disease, but even if there isn’t, surely a responsible journalist could be more balanced in their reporting. An alternative headline such as ‘Family plea to drug firms for rare treatment’ might even have served as a welcome wake up call to researchers around the globe.

“…we went from ‘no treatment, no hope’ in the early 1990s to now having several effective drugs available.”

Perhaps the greatest frustration comes from the knowledge that, on the whole, the industry’s record in Rare Diseases is very strong. In my own personal family experience of Fabry Disease, it’s almost astonishing to think that we went from ‘no treatment, no hope’ in the early 1990s to now having several effective drugs available. The same could be said for conditions such as Gaucher’s, PNH, several MPS disorders and many more.

So why does the Pharmaceutical Industry have such bad press in spite of this impressive track record and does it matter?

The answers to the first part of that question lie beyond the scope of this article, but the answer to the second part is a resounding ‘yes’. In order to maximize the potential for effective research collaboration between the academic and the commercial sector, so that these Rare Disease treatments can be identified and fast-tracked, there has to be an environment in which both sides can sit comfortably together. If the academic institutions around the globe consider such collaboration to be akin to ‘dealing with the devil’ then progress will be unnecessarily hindered. So far that hasn’t happened and relationships between academia and industry are strong, but an increasingly tight regulatory environment which makes it harder for pharma companies to deal with doctors is not helping.

At the very heart of this issue lies the ever-present pharmaceutical industry conundrum: how to create the financial returns for shareholders and investors without pricing therapies out of the reach of individual patients and authorities. Over the years there have been many initiatives to try to solve this dilemma, but when it comes to Rare Diseases, the problem is magnified. You don’t need to be a mathematician to understand that it’s hard to make the numbers add up. Take Lafora Disease for example. There may only be 100 patients in the UK; perhaps a few thousand in the world. Even if all of them were found, any successful treatment would have to be prohibitively expensive in order to recoup the probable billion dollar plus R&D budget.

But this is only the traditional view, using thinking that perhaps has become redundant in the era of modern medicine. Could the Pharmaceutical Industry do more to help overcome this problem? I think it could.

How about some novel thinking around patent-life? Would it not be fair to employ a formula whereby the prevalence of a disease determines an extension to the patent life of a particular therapy? In the case of Lafora disease, perhaps it would mean a doubling of the exclusivity for the marketing company, meaning a halving of the price?

What about ‘per-patient’ pricing arrangements (capitation pricing) rather than ‘per-dose’? What about negotiating an easier environment through which ‘mainstream’ prescription drugs can be diverted to the OTC sector?

“What about negotiating an easier environment through which ‘mainstream’ prescription drugs can be diverted to the OTC sector?”

I’m certain there are experts within the pharmaceutical industry who have a much greater grasp of pricing issues than I have (I would certainly hope so!) but what seems to be lacking is the creative spark and concerted drive to make changes happen. While nothing happens, the industry remains prone to ill-informed opinion like that presented in the Sunday Times and the longer that goes on, the more corrosive it becomes.

It’s time for the industry to start defending its corner with more assertiveness and the record on Rare Diseases presents us with the perfect opportunity. There are so many good-news stories in this area that need to be told. Let’s be bold. Our ambition should be to see newspaper headlines that make people feel good about the Pharmaceutical Industry; headlines that make them realize we really do have patients’ interests at heart.

Neil has worked in pharmaceuticals since the late 1970s, starting out as a research chemist and gravitating towards healthcare communications.

He founded and ran Matthew Poppy Advertising for 15 years before it was bought by WPP.

Closing thought: How can we raise the profile of good news stories in rare diseases?