Our ‘spotlight on’ this month looks into the skin condition, actinic keratosis (also known as sunspots), which are premalignant but can develop into skin cancer. Kantar Health’s Amy Sangway and Stefanie Beck highlight the importance of skin checks in early diagnosis and how further awareness of this condition is needed around the world.

What are actinic keratoses?

Actinic keratoses (AK), also known as ‘solar keratoses’ or ‘sunspots,’ are skin lesions that are caused by long-term UV damage to the skin. ‘Actinic’ and ‘solar’ come from Greek and Latin, respectively, and mean ‘sunlight–induced’ with keratosis meaning ‘thickened scaly growth.’1

The term is often used in plural (‘keratoses’) as a person rarely has only one (‘keratosis’); in fact, it is estimated that invisible (subclinical) lesions appear up to 10 times more often than visible lesions.2,3

“Actinic keratoses are a premalignant skin condition that can develop into skin cancer.”

What risks are associated with actinic keratoses?

Where do they appear, and what do they look like?

Actinic keratoses most commonly appear on sun-exposed areas of the body. In some cases they can feel itchy or tender, be inflamed or rarely even bleed. Initially, a person may not be able to see actinic keratoses as they are so small, but they can be felt as rough spots, commonly described as feeling like ‘sandpaper.’7 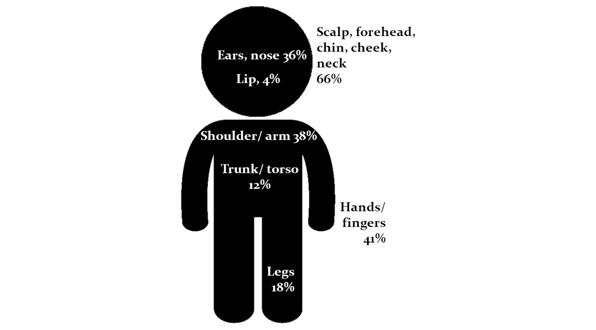 Figure 1: % of patients receiving treatment for AK at different locations8

Figure 2: Appearance: % of treated AK.8 Images are published with the permission from the New Zealand Dermatological Society Incorporated

Who is it likely to affect?

Prevalence of actinic keratosis is related to cumulative sun exposure and thus is more common in countries located close to the equator and in people who work outdoors.9

• UK: More than 23% of the population aged 60 or older (National Institute for Health and Clinical Excellence)11

“As with skin cancer prevention, protecting one’s skin from the sun will help reduce the risk of developing actinic keratoses.”

How can it be prevented?

As with skin cancer prevention, protecting one’s skin from the sun will help reduce the risk of developing actinic keratoses. Typical prevention guidelines (as advertised on the skin cancer foundation website) recommend the following actions:12

• cover up with clothing, a hat and sunglasses

Public awareness campaigns promoting sun protection have been running for the last two decades, such as the iconic and successful ‘slip slop slap’ campaign that started in the 1980s, and most Australians are well informed on this matter.13

In 2010, our survey amongst 1,200 Australians aged 40 years and older showed that most participants typically use some form of sun protection, most commonly a hat, sunscreen or sunglasses (see figure 4).14

Another step in prevention / early detection of actinic keratoses and skin cancer are skin checks. This is particularly important as sun protection has not always been as widely used as it is nowadays, and most of the sun damage of the current AK ‘generation’ already happened many years ago.

Figure 5: % of Australian having been to a doctor for a skin check-up or checked their skin themselves14

Our survey, conducted amongst 1,200 Australians aged 40 years and older, revealed Australians are less compliant with skin checks than with sun protection, with only 36% of respondents having been to a doctor for a skin check in the previous 12 months. Meanwhile, 62% of Australians have checked their own skin in the previous 12 months.14 Self-examinations of the skin are recommended by healthcare professionals and official health associations, such as the Australasian College of Dermatologists, in order to detect skin irregularities early. 15 However, our study also found that participants who check their own skin are not very confident that they would actually pick up sun-damaged irregularities that require further examination by a healthcare professional.14 Considering that Australia is the country with the highest incidence of skin cancer in the world and two in three Australians are estimated to be diagnosed with some form of non-melanoma skin cancer before the age of 70, it appears there is still a need to promote the importance and benefits of skin checks amongst the Australian population. 16, 17

The internet is a good source of information for people who are unsure about how to check their skin. An example is the step-by-step skin check guide available on the ‘know your own skin’ website (www.knowyourownskin.com.au).

“…Australians are less compliant with skin checks than with sun protection…”

A number of mobile phone apps are also available that help patients monitor changes in their skin and have useful functions such as reminders and the ability to take and upload photos that can be shown to physicians at the next skin check.

How is AK treated once it is detected?

How can the pharmaceutical industry better support patients with actinic keratoses?

The pharmaceutical industry could play an important role in raising current levels of awareness of actinic keratoses (particularly in high-incidence countries), particularly in educating patients about the associated risks of actinic keratoses and the importance of skin checks in early detection. Patient education materials that help patients understand the available treatment options (types of treatments, application, treatment frequency and duration, effects on skin etc.) as well as advice on skin care during and post-treatment may also be useful.14, 23

Amy Sangway is a Director and Stefanie Beck is a Consultant at Kantar Health Australia. In the past 5 years, they have been involved in a number of market research engagements into solar keratoses, sun protection and skin check behaviour surveying various healthcare professionals, industry bodies, patient support groups, patients and members of the general Australian population.

How can pharma raise further awareness of skin checks?