Searching for terra firma in the biosimilars and non-original biologics market: insights for the coming decade of change

In the global biosimilars market, the sands are shifting underfoot. It’s time for all stakeholders to re-examine the present environment and re-set expectations for the future.

From the creation of a regulatory pathway for biosimilars in the EU only three biologics experienced EU biosimilar competition until the launch of Remsima/Inflectra in 2013, and none have (as at Jan 2014) been launched in the U.S. for lack of a biosimilar approval pathway. With uptake on the existing biosimilars very measured, it was a period of relative calm—bordering on stasis—in mature markets.

There are, however, several indications that the status quo is about to change—perhaps dramatically:

• Remisima / Inflectra, a biosimilar of infliximab, is the first of a new wave of monoclonal antibody (mAb) biosimilars—treating chronic conditions in the largest areas of biologic spend—to be approved in the EU.

• The European Medicines Agency (EMA) permitted indication extrapolation in the above approval…and the biosimilar itself is from a South Korean firm.

• A non-original version of filgrastim, an equivalent of the biosimilar versions of filgrastim already available in Europe, has been approved for marketing in the U.S.

• For the first time, a biosimilar has eclipsed an originator product in volume share in Europe.

We are entering an era with great potential for change in the biosimilars market, marked by the LoE of many of the world’s leading biologics, and foreshadowed by a number of “firsts” in what is being brought to market, by whom, and where. 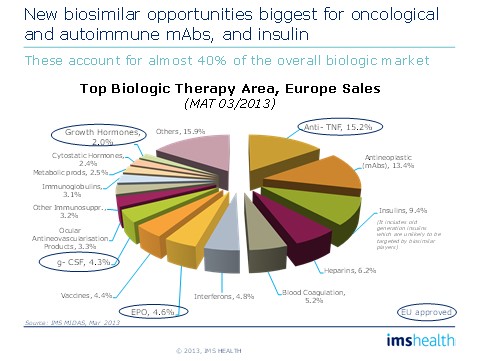 Originator companies should be aware that competition can come from a range of sources and will differ by geography. Both companies planning to enter the biosimilars/non-originals market and those planning a defence of their original need to understand:

• Uptake of biosimilars is dependent on geography, therapeutic area, molecule and healthcare system. You have to understand them all to understand full potential. 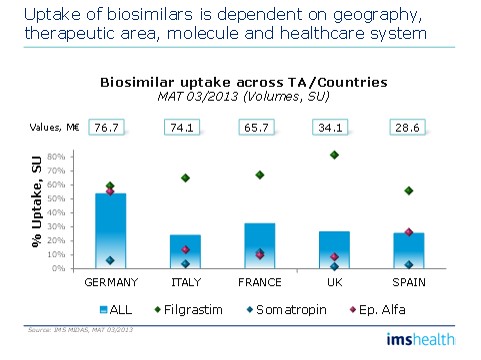 • Reaping the benefits of the opportunity in biosimilars will require significant investment in navigating the regulatory, manufacturing, and sales and marketing path to market.

• The biosimilars market will have to be created, requiring time and effort. It is wrong to assume that a market for biosimilars will automatically exist.

• The most evolved regulatory environments are also the toughest markets. An approved product does not mean an evolved market.

• Because of barriers to entry, partnerships will be a key feature of the biosimilars industry, with some unusual alliances among diverse companies.

In the overall pharmaceutical market, Large Pharma’s share in emerging markets has dropped from 53 percent in 2003 to 38 percent in 2013. A similar, albeit slower, shift has been taking place in biologics. A decade ago, pharmerging players had 31 percent of the biologics market and 24 percent of the recombinant therapies market. Today, those numbers are 36 percent and 27 percent, respectively. So, Large Pharmas have “given up” eight percentage points in biologics market share to players in pharmerging markets and small to medium-sized companies. If the market continues to grow at the same pace of 25 percent a year, we can expect large pharma to lose an additional seven to eight percentage points of market share by 2023, equating to several billion dollars left to other players. 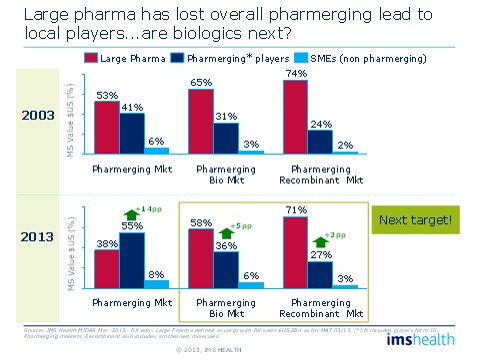 Figure 3: The rise of local players

While Multi-National Corporations (MNCs) have focused their efforts on mature markets, local players in emerging markets have been inserting themselves, little by little, into the non-original biologics arena. By now, this parallel market development, sometimes backed by government, is well under way, and the stage is set for great change. 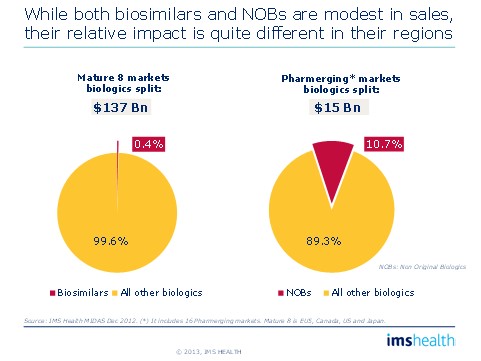 • As governments in emerging markets extend health coverage, and as the disease profile shifts, they will push for lower prices and gravitate toward non-original biologics, challenging originators.

• Decisions about when, how, and at what price to launch a novel biologics product in emerging markets need to be thought through carefully because of the threat of local non-original biologics.

MNCs may need a new business model to launch novel biologics in emerging markets, and they certainly will have to find the right balance between pricing to drive uptake and pricing profitably

• MNCs should acknowledge that the next growth cycle for non-original biologic players could yield a passage from imitation to innovation and from localization to globalization.

Stefano Di Biase currently holds the position of consultant in the European Thought Leadership team, focusing on strategic issues within the pharmaceutical industry. Stefano’s research experience spans across several therapy areas with a particular emphasis on Biosimilars and cost containment measures. Stefano has delivered several presentations to clients and presented Biosimilars’ perspectives at conferences across Europe.

Prior to IMS Health, Stefano had worked in various consulting firms and, more recently, for a major investment bank in London. Stefano holds a BA in Economics and further master degrees in International Management from Audencia Nantes School of Management and in International Business from Aston Business School.

Closing thought: What can we expect from the mature and emerging markets with respect to biosimilars in the future?