As the numbers of Abbreviated New Drug Applications (ANDAs) rise in the US, what are the trends in litigation? Sheila Swaroop and Kaitlin Heinen examine the findings of a recent report. 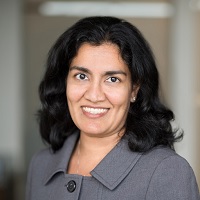 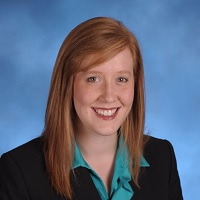 The use of legal analytics to map general trends in litigation has become an increasingly popular tool. In a Hatch-Waxman/ANDA Litigation Report, published in April 2016 by legal analysts Lex Machina, data were analysed from approximately 2,200 cases filed in US district courts from January 2009 to December 2015. This article summarises the statutory framework for this litigation and highlights some of the report’s findings.1 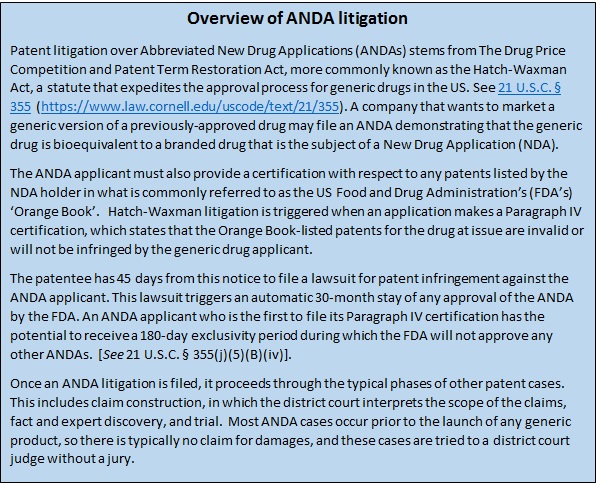 1. Filings of ANDA litigation on the rise 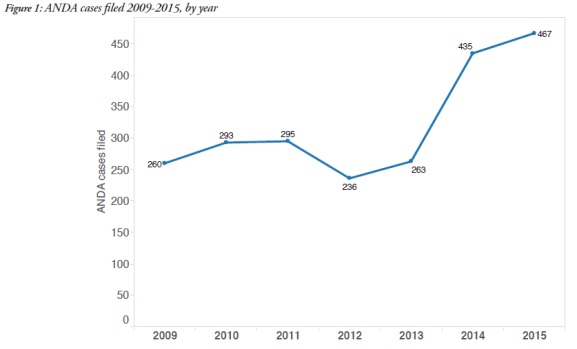 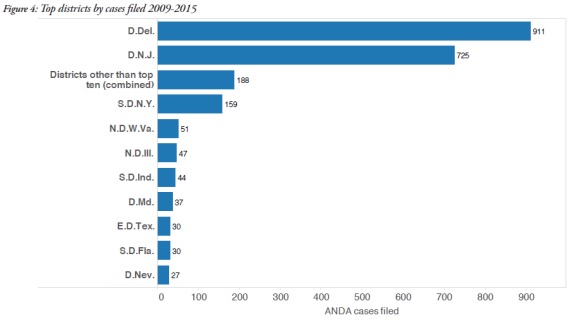 Many of the pharmaceutical companies which litigate ANDA cases are incorporated in Delaware or have headquarters in New Jersey, which probably explains the popularity of these two forums. In addition, the judges in these areas have become very familiar with ANDA litigation, as shown in the graphic below, and have presided over multiple ANDA cases.

The report also identified the participants in these cases. On the patentee side, AstraZeneca participated in 138 cases as a claimant, Novartis in 133, and Pfizer in 130. Other frequent patentees included Takeda, Cephalon, Roche, and Abbott Labs. 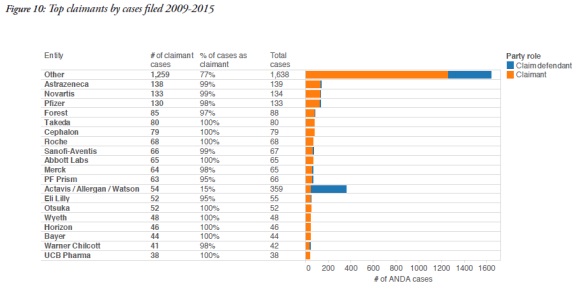 On the defence side, the report identified Sandoz as the most frequent participant, with 422 cases as a defendant. Actavis, which includes Allergan and Watson Laboratories, participated in 305 cases, and Teva participated in 152 cases. Other frequent defendants included Lupin and Apotex. 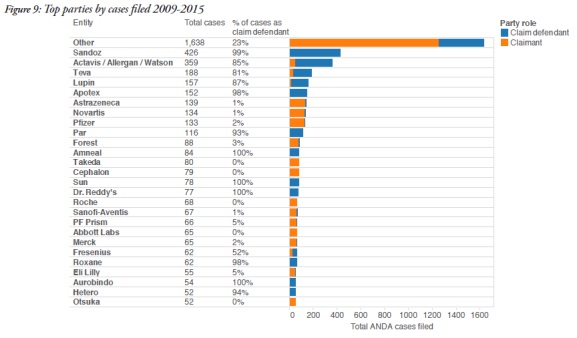 Obviousness, under 35 U.S.C. § 103, was the most frequent ground for finding invalidity of the patents involved in ANDA cases (71.4%), while other patent cases tended to rely on anticipation/novelty grounds, under § 102 (48.1%), when they were successful on the issue of invalidity. 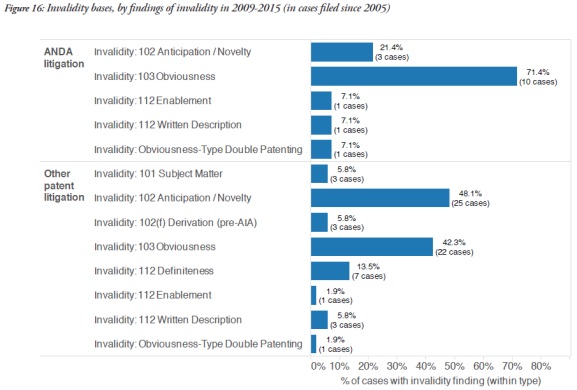 ANDA cases were significantly more likely to involve injunctions – 11% in ANDA cases but 4.2% in other patent cases. This is probably due to the fact that many ANDA settlements include the issuance of an injunction as one of the terms. 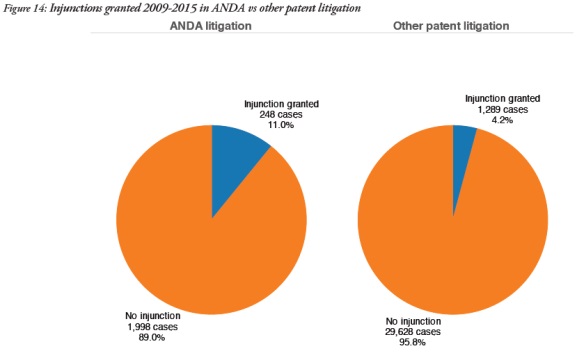 5. Timing of ANDA litigation consistent with the statutory 30-month stay

The median time to a claim construction, or ‘Markman’ hearing in ANDA cases, was 15 months, while the median time to trial was 27 months. These statistics correspond to the general framework for ANDA litigation, in which litigants aim to reach a substantive resolution of the patent claims within the 30-month stay of the ANDA that is put in place when the lawsuit is filed.

Another interesting trend reflected in the report was the increase in the frequency of invalidity challenges of Orange Book patents in concurrent Patent Office proceedings. Since 2012, ANDA applicants have had the ability to seek inter partes review (IPR) of patents at the Patent Trial and Appeal Board. The Report showed that the use of IPR proceedings to challenge these patents has been growing over time. That trend is expected to continue, in view of the difference in claim construction standards and lower burden of proof that govern IPR proceedings.

Overall, the report summarises some general trends for ANDA cases that are helpful when assessing forum selection, timing and strategies for Hatch-Waxman litigation.

Sheila Swaroop is a partner at Knobbe Martens Olson & Bear LLP in CA, US, where she focuses on litigation of intellectual property (IP) disputes. She has litigated Paragraph IV disputes under the Hatch-Waxman Act for pharma companies. Her experience includes pre-litigation counselling, strategic enforcement, and litigation of disputes through trial.

Meeting pharmacovigilance standards in the US and Europe