(Continued from Pharma gets social: pharma lessons in social media and clinical trials)

Whether it’s just the latest fad or a new phenomenon that’s here to stay, one thing that’s clear about Pinterest, the visual social sharing tool, is that it has rocketed from obscurity to become the fastest growing social media platform of all time.

As some pharmaceutical companies take tentative steps toward engaging consumers via the new channel, will they need to take a new approach or will the lessons learned from existing social media engagement apply?

In Pinterest’s own words, it is a tool that “lets you organize and share all the beautiful things you find on the web.”

In the past, research carried out by Creation Healthcare highlighted the challenge of connecting people online across different languages, which places a limit on international participation in social media channels. One of the most powerful aspects of Pinterest, however, is its highly visual approach to social media, with images being the primary medium for communication. This has the potential to facilitate common-interest connections between more diverse groups of people.

“I am by no means arguing that Pinterest is the new Flickr, in fact each has a unique place in what is an increasingly complex network of popular social media channels.”

The idea of pharmaceutical companies using photo sharing tools to bridge language barriers is not new. In 2010, Pfizer’s ‘Can You Feel My Pain’ initiative addressed this challenge by including a Flickr photo-sharing group, encouraging people to share their experiences of chronic pain through the international language of photography.

The rise of Pinterest, however, puts the potential for this kind of cross-language engagement in the mainstream.

According to Alexa, which monitors global internet usage and has tracked Pinterest’s incredible rise to popularity, the site overtook photo sharing tool Flickr in reach (the percentage of global internet users who visit pinterest.com) earlier this year and the gap between the two sites continues to grow. 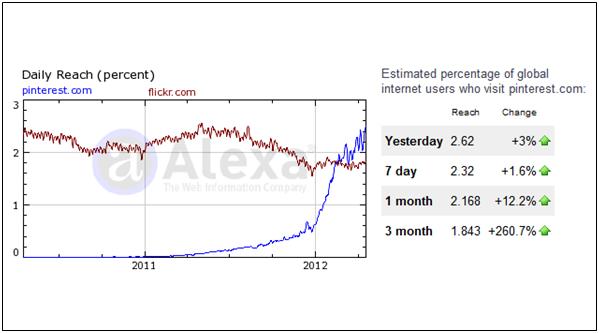 I am by no means arguing that Pinterest is the new Flickr, in fact each has a unique place in what is an increasingly complex network of popular social media channels. On Flickr, users publish and share their own images, on Pinterest, users ‘pin’ images from anywhere on the internet (which are then linked back to the original source) and can also add their own images. So it’s a highly visual way for people to share anything they find online.

What I am suggesting is that Pinterest is a channel that holds great potential for any brand looking to engage consumers, and in this context it is of interest to pharmaceutical brand managers and communicators. Like Facebook, which has also emerged as a consumer-led social media channel, Pinterest will be of special interest to pharmaceutical companies operating in the majority of regulated markets where direct to consumer advertising is banned but engaging consumers in a compliant, relevant way has become imperative.

What are the opportunities for pharma?

At its simplest, Pinterest is another channel for pharmaceutical companies to broadcast content. Yet as with other social media platforms like Twitter and Facebook, each of which have the potential to open up opportunities for public dialogue, Pinterest also allows users to add comments to the ‘pins’ of others and these comments will appear for anybody else to see. So as with existing social media channels, the issue of digital governance should be high on the agenda of pharmaceutical communicators as Pinterest continues to rise in popularity.

Opportunities for pharmaceutical companies to engage may be around themed content. Pinterest users group images into themes or boards, and like-minded people can connect around those boards. This lends itself to the development of communities around disease areas. In the area of diabetes, for example, many diabetes themed pin boards have been created by users sharing related content. 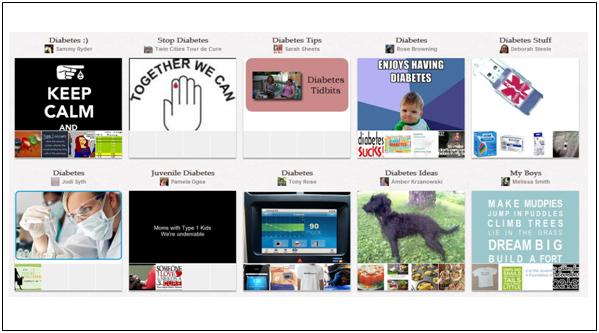 The first major pharmaceutical company to develop its presence on Pinterest is Bayer, which has launched a set of ‘pinboards’ (groups of images and videos on Pinterest) around such themes as Bayer’s Business (with content ranging from diabetes to the company’s crop science subsidiary), Sustainability, Innovation, and Bayer Advertising. The company’s newest pinboard, ‘STEM’ (Science, Technology, Engineering &amp, Math Forum April 18 2012) supports Bayer’s activity around an educational forum event.

“In the area of diabetes, for example, many diabetes themed pin boards have been created by users sharing related content.”

Although Bayer’s engagement to date with other Pinterest users is limited, with a little over 180 followers to its ‘Bayer’s Business’ pinboard for example, the company is clearly experimenting with a channel that if nothing else might drive digital traffic to its other online channels – with its rapid growth and content sharing model, Pinterest has already emerged as one of the top social media referrers to other sites. Bayer’s pinned images link back to its digital pressroom so they provide another channel to broadcast news, with the potential for other Pinterest users to add comments. How consumers will engage with this content as the platform grows remains to be seen.

Novo Nordisk has also briefly experimented with the platform, pinning some images before removing them and leaving a blank profile, perhaps for future use.

As Pinterest’s reach continues to grow, now is the opportune time for pharmaceutical companies to learn about the channel, review digital governance systems, and consider the possible role of Pinterest in future engagement tactics. Taking this approach proactively will enable the channel to be incorporated into campaign planning when the time is right.

Daniel Ghinn is CEO at Creation Healthcare, a consultancy that helps pharmaceutical companies to plan digital and multichannel campaigns. He can be reached by email at daniel.ghinn@creationhealthcare.com or on Twitter at @EngagementStrat.

Do you think Pinterest is a beneficial social networking tool for pharma?