‘Free’ pricing in the UK: the influence of NICE and NHS England

The voluntary Pharmaceutical Price Regulation Scheme (PPRS) regulates the majority of the branded medicines market in the UK. The PPRS has always regulated profit, and pricing has been essentially ‘free’ within the constraints of profit control. But just how free is free pricing, these days? Leela Barham investigates.

Price is a key factor for cost effectiveness

Since 1999 NICE has been scrutinising the clinical and cost effectiveness of medicines and other health technologies. NICE committees draw on cost effectiveness thresholds to help them make their recommendations, and those recommendations include a legal requirement for the NHS in England to fund, or not to, as the case may be. NICE is one of only a handful of health technology assessment (HTA) agencies that has an explicit threshold range. That said, NICE doesn’t say what the price should be in order to hit its threshold.

One of the easiest ways to secure a positive NICE decision, in theory, is setting the price to hit the NICE threshold. Companies have to develop their own cost-effectiveness model so they should be in a position to know approximately what price that would be, even if they can’t anticipate all the issues that a NICE appraisal committee may raise regarding the evidence for their product.

However, dropping the price could be a bitter pill to swallow commercially, and it can affect pricing in other countries too. The UK price is often used for setting reimbursement prices in other countries. This explains why there is the option of Patient Access Schemes (PAS).

The 2014 PPRS describes PAS as a way to ‘facilitate patient access to a medicine where NICE’s assessment of value, on the current evidence base, is unlikely to support the list price’. Medicines assessed under PAS are expected to be the exception and not the rule.

The rise of PAS

The NICE website lists 138 PAS up to November 2017. NICE provides a Word document that lists all Technology Appraisal recommendations, which not only provides the recommendation made, but also a commentary on them, including PAS. Breaking down PAS by the year of the NICE recommendation (up to September 2017) illustrates a steady rise in PAS (Figure 1). 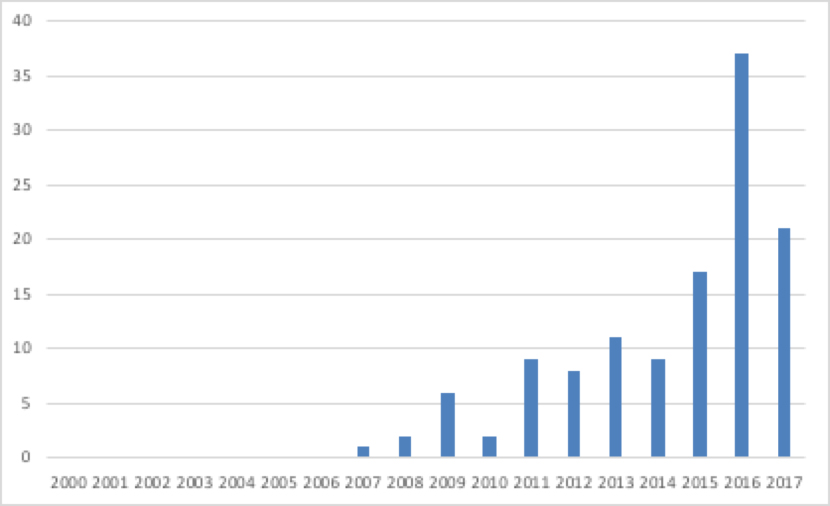 A total of 75% of NICE-approved PAS up to November 2017 are simple discounts. Other deals may have been structured slightly differently, but free stock or rebates are still essentially ways of reducing price.

PAS are not the only way that NICE-assessed drugs may be discounted. There are now a number of ‘schemes’ or ‘agreements’, or a better description is ‘deals’. While the details are commercial in confidence, price is going to feature.

These are often deals that are being struck with NHS England (NHSE). For example, they include the expectation of matching discounts, such as those secured through the Commercial Medicines Unit (CMU) as a result of tenders. The CMU used to be within the Department of Health, but now sits within NHSE. Commercial access schemes/agreements and managed access schemes/agreements are in place too, negotiated with NHSE.

NHSE has also been given responsibility for agreeing PAS formally as part of an agreed change to the 2014 PPRS, applying from 1 January 2018.

The importance of deals to secure a NICE recommendation

One indicator of the importance of PAS (and other deals) in securing NICE approval is to assume that, had a deal not been struck, NICE would have said ‘no’. Comparing Figure 2 (real trends) to Figure 3, where a recommend or optimised decision is switched to not recommend, highlights how different things could have been. 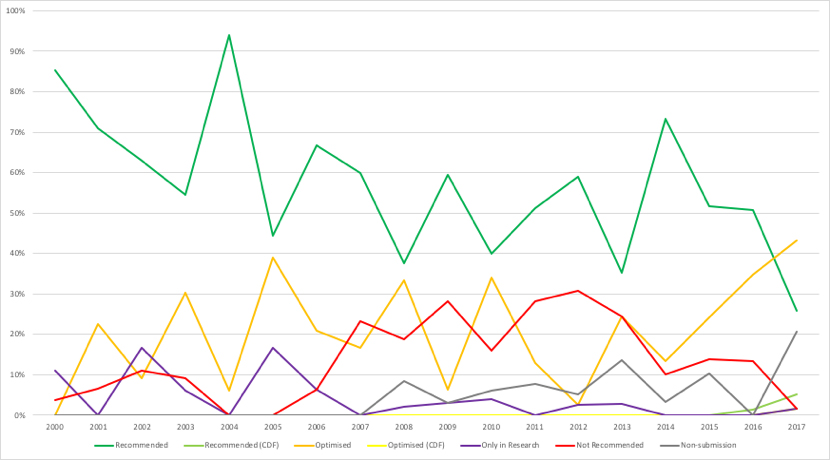 It’s clear that PAS and other deals have increased in importance in recent years (Figure 4).

Figure 4: Proportion of NICE Technology Appraisal recommendations with a deal, March 2000 to September 2017 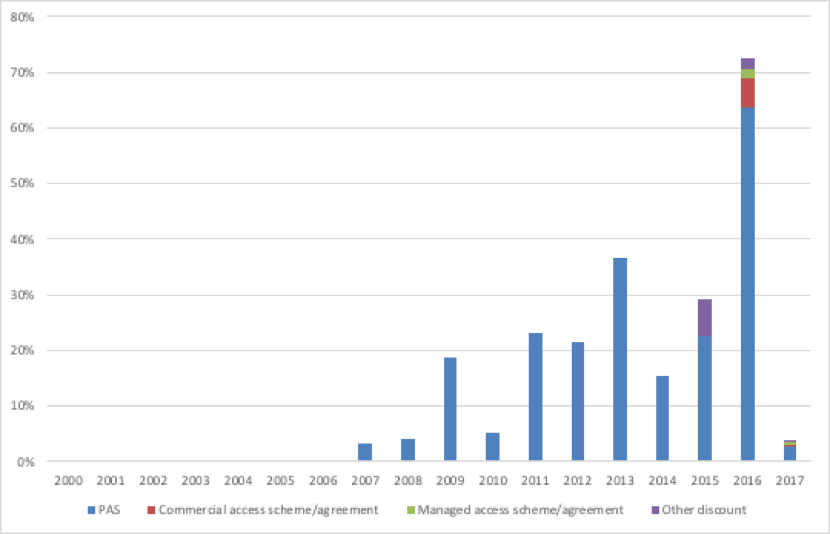 These deals are, like the PPRS, voluntary for companies. This suggests that firms are willing to cut price, confidentially, to secure a NICE approval. That also means that NICE and NHSE are increasingly, if indirectly, shaping the real prices paid.

Deal making should be part of the PPRS renegotiation

So, despite the view expressed in the 2014 PPRS that there is free pricing, the commercial reality is different. The PPRS also said that PAS should be exception and not the rule; deals are now business as usual. The implication is that the PPRS needs to ensure that it brings in commercial realities and includes the key agencies that are shaping and doing the deals. NHSE has not been a signatory to the PPRS, nor has NICE. This time around, there is a question about how best to include them.

Note: From 5 March 2018 Leela will be a subject matter expert on medicines pricing policy development for a Government client. For the duration of her involvement in that project she will be restricted on the topics she can cover.